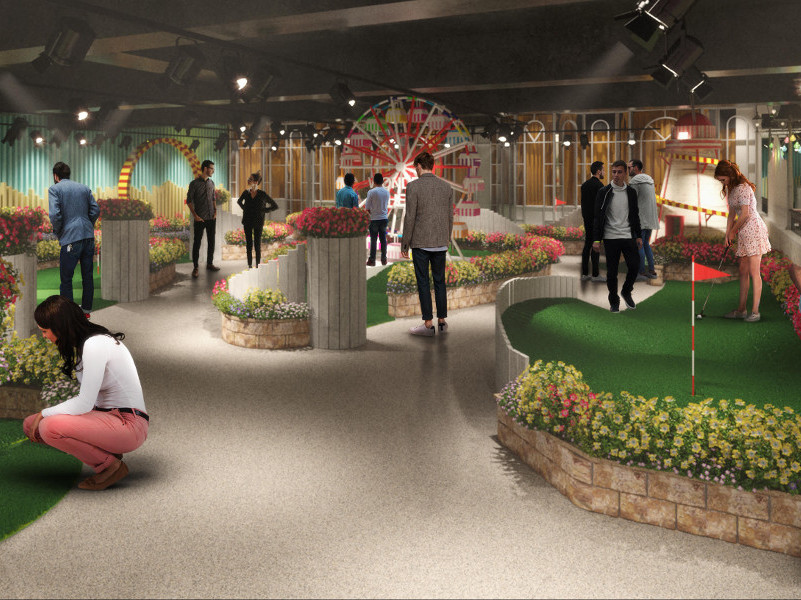 How were you commissioned?:
Following the success of Swingers City, we were commissioned by the Institute of Competitive Socialising to design their second crazy golf venue; Swingers West End which will open in February 2018. What was the brief from the client and how much were they involved?:
The brief for Swingers West End was to take crazy golf back to its seaside roots in a venue that reimagines the faded glamour of the 1920s English Riviera. As with Swingers City, the client was involved in every stage of the design process, and it feels as if we are working harmoniously together to create exciting, visual and immersive spaces. We are meeting weekly throughout the process. How did the brief affect the materials and design choices?:
Our focus was on making the journey through the spaces full of discovery and surprise, almost like walking through the world of Alice in Wonderland. As the brief was 1920s English Riviera, we took traditional iconography and re-interpreted it with a modern twist. How did your previous experience help you with this project?:
Having already created Swingers City, the Institute of Competitive Socialising's first crazy golf site which has proved very successful, we could improve upon and expand the concept which already existed. Each location has a strong identity but with this one we were inclined to be more daring. Can you explain the layout of the project:
Guests will enter through a disguised entrance, made to look like a misplaced seaside shop just off Oxford Street. Inside, guests go up a grand staircase to a compact reception area facing a bandstand bar. This opens out onto the main area which includes the dining area, 2 crazy golf courses, 4 private dining spaces and another hotel bar made to look like a building. What problems or challenges did you face?:
One of the main challenges we faced was the ceiling height which proved tricky when trying to house a grand seaside hotel and bandstand. To overcome this, we deliberately compressed the ceiling height to make it feel more generous throughout the majority of the space. Elements were scaled to be at the legal minimum in order to achieve the maximum impact. What do you feel were the most unusual design elements of the project?:
Unusual elements within the design include the bar which is 28m long inside a bandstand, and the food stands are modern beach huts where the panelling has been designed to make the total appearance like an axonometric drawing (they look 3D but they are 2D). How do you think this project is pushing design forward? What makes it special?:
This project doesn't take itself too seriously, it's playful and places fun over cool. The design is versatile and can easily be adapted and expanded at very low cost. This allows the owners to change the experience throughout the year and as the business grows. We also re-used elements from the strip out of the space within the new design.