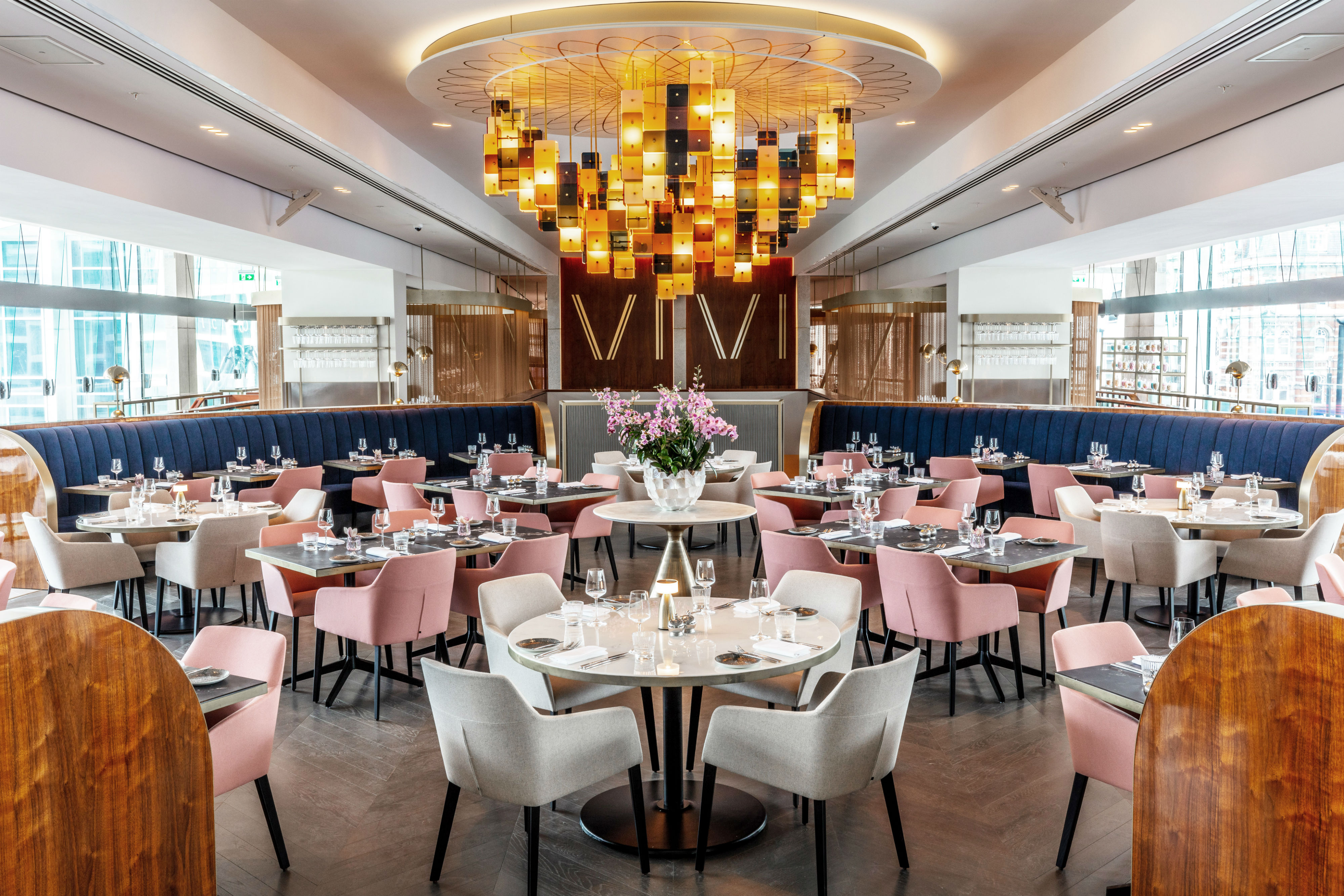 Centre Point’s new flagship restaurant, VIVI, has launched. We speak to the designer behind the restaurant’s stunning interiors.

London-based Gordon Young Architects prides itself on creating beautiful, practical architectural and interior projects. Its founder, Gordon Young, originally set up the practice as SAY Architects, but in 2018 he started a new company under his own name – bringing all of his previous experience, skills and expertise with him.

One of the projects that Young continued to work on throughout the practice’s cross-over was Centre Point’s new flagship restaurant, VIVI. All all-day dining experience, VIVI opened in late February 2019 and celebrates London’s ‘swinging 60s’. As the restaurant launched and revealed its stunning interiors, we spoke to Gordon Young himself, discovering why working on Centre Point’s flagship restaurant was something the architect aspired to do. “I think every designer respects the building,” Young begins, discussing Centre Point. “As a consumer you might think it’s quite ugly, but I think the 1960s Brutalist movement is something every designer or architect loves… Centre Point is an iconic building, and it was the centre of London at one point.” The heritage of the building – which was first built by Richard Seifert in 1966 – was a big part of the restaurant’s brief. Young says that he was tasked with creating “an all-day dining experience… the 60s concept was ingrained into our idea already because of the architecture. We wanted to respect the architecture itself.”

This idea worked alongside VIVI’s nostalgic food concept of bringing 60s classics – prawn cocktail, chicken Kiev, and artic rolls, to name a few – back with a modern twist. With this in mind, Young and his team came up with another reference point: ocean liners. “Again, [it was about] going back to the nostalgia of elegance at that time. We wanted something quite English and very feminine. It’s quite a hard space so we wanted to soften it up.” VIVI’s main dining room features a central, circular hub, which Young says is supposed to invoke a “dance hall” feel. “We wanted the restaurant to be fun and elegant,” he says. “It had to have a timeless quality but we didn’t want it to be too pompous.” Discussing the opulent design, Young mentions he has found clients are “sick of minimalism. I think a bit of opulence, fun and cheekiness is definitely needed.”

One element of this cheekiness Young mentions lies within two slogans, which have been written into beams on either side of the expansive space. The quotes can be read from the street below, and the first slogan, Take Your Pleasure Seriously, is an Eames quote that references the restaurant’s 60s design. The second slogan is Deliciously Different, the tagline of hospitality group rhubarb, who own and operate VIVI. Gordon Young Architects have previously worked with other strong hospitality brands, including the Aqua restaurant group. However, Young reveals that working with rhubarb was a very different experience. “Part of our sell to rhubarb was that the design came with the branding,” he says. “They didn’t have a name; we came up with the idea of referring back to Centre Point and calling the restaurant ‘VIVI’ [the roman numerals for 66]. They gave us quite an open audit, so we worked very closely with rhubarb on a lot of things.” One of the biggest challenges Young and his team faced with the restaurant’s design was that Centre Point is a listed building. “We couldn’t touch a lot of the interiors,” he explains. “Every fitting we put in the ceiling, we had to double check with Camden [Council]. [The ceiling] is protected, the stairs are protected… there’s original flooring on either side [of the restaurant] in the lower galleries... The brief from Camden was that we needed to keep the transparency of the space because that was the aspiration from the original architect,” Young continues. “The listed floor [meant] we couldn’t go under it, to put any electrical cables in; instead we used the beams to get the lighting and the power in.” As it is such a large space, VIVI has been divided into four zones: VIVI Bar, the Liquid Lounge, the Gallery and VIVI dining. The Liquid Lounge features large, pink banquet booths. “We wanted that zone to be quite feminine,” says Young. “It turns into a cocktail lounge in the evening. On the other side [of the restaurant, in the Gallery] is a working-lunch, all day space. There’s quite a lot of action going on that side; we wanted to elevate the dining so that diners can see what’s going on in Oxford Street.”

In the day, VIVI feels bright and airy, but in the evening the mood shifts, turning the restaurant into a space that is elegant, cosy and bar like. “It’s all to do with the colour palette and lighting,” Young says. “It’s about creating an opulence without being pompous.” One of the key features of VIVI is the signature, bespoke chandelier suspended over the main dining area. “We took inspiration [for the chandelier] from Playplax, a toy designed by Patrick Rylands,” explains Young. “He designed Playplax in 1966 – the same year Centre Point was first opened. We wanted to create something that you could look at from street level, something that you would see and be attracted to come up by.” “Originally we wanted the whole ceiling to be covered with the feature, but that got reduced to a chandelier,” he continues. The team approached Danish designer Vibeke Fonnesberg Schmidt to create the chandelier out of subtly coloured plexiglass and brass. Elsewhere throughout the restaurant, other artworks dot the space. They all have a pop-art theme, and feature actresses from the 60s – including Twiggy and a young Joanna Lumley. “We’re channelling the 60s female icons,” Young laughs.

As guests enter VIVI, the first thing they will notice is the restaurant's glamourous elliptical bar, which has been compared to a shimmering Paco Rabanne chainmail dress. “We uses a lot of ellipticals to break up the space and soften it, because of the linear and rectangular [nature] of the space,” Young comments. “We also felt that guests should come to the bar as they entered the restaurant, rather than going through the restaurant to get to the bar.” Across the restaurant, on the other side of the space, are two private dining areas. These are sectioned off by intricate chain mail curtains, mounted in a curved brass frame. “When we created the two private dining spaces, we wanted there to be a separation without them becoming isolated,” says Young. “We’ve made them a bit special, but guests still have the connection with the rest of the space.” Various specialists, including an acoustic specialist and lighting consultants, Nulty, were called in to help Young and his team transform the space. “Ultimately it [comes down to] teamwork,” he says. “For a larger project like VIVI, you want to have a team involved – you want to have the specialist skills.”

Now that VIVI is open for business, Young says that his practice are moving on to new projects. “But it’s really nice to come in and see it,” he mentions. “I feel like I’ve fulfilled the brief, and that’s rewarding. There’s a very mixed crowd and the restaurant works in a very open way; it’s a very elegantly designed space but it even works with kids.” The restaurant has even been likened by some diners to a Wes Anderson film set. Questioned about this, Young laughs. “We all need a bit of glamour [in our lives]. We should all take our pleasures seriously.” 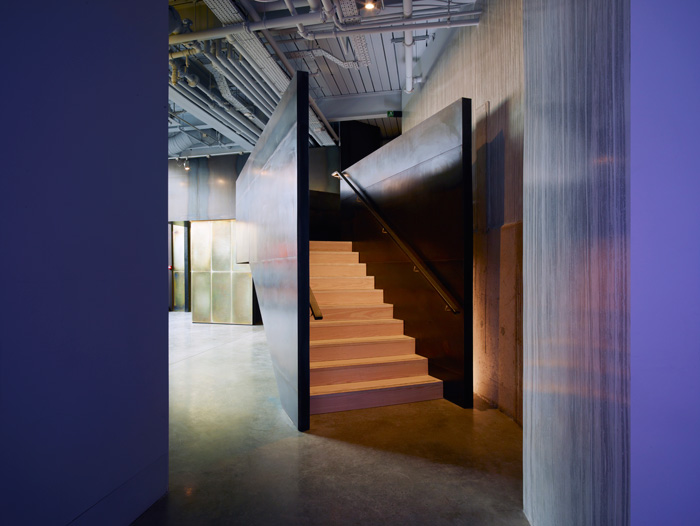