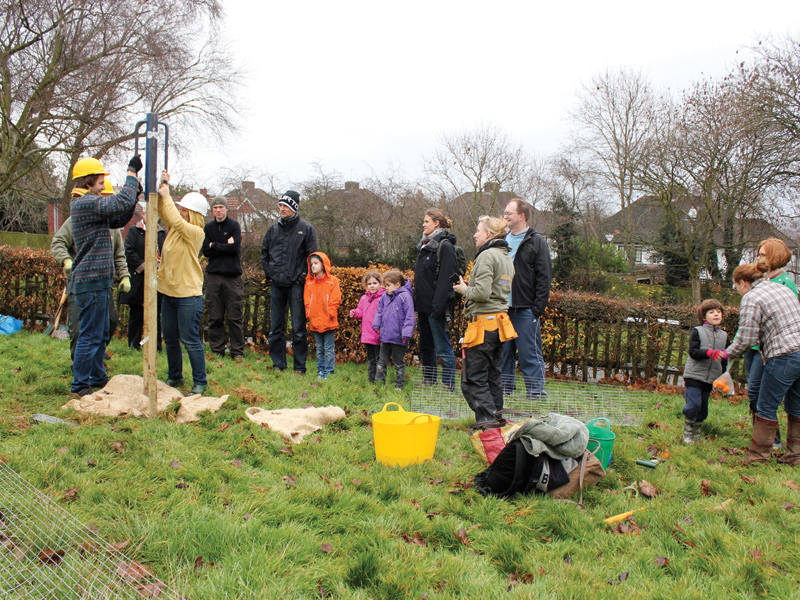 Designers and architects are renowned for their lateral thinking, their ability to stretch the imagination in all directions in search of the most powerful solution to issues of ergonomics, economics, aesthetics and culture.

But it’s easy to become so familiar with usual methodologies and restrictions that it’s easy to be blind to the possibilities of what might be achieved if the entire approach was different.

I recently accepted an invitation to consider a whole new way of designing communities and systems – through Permaculture – held at St Ethelburga’s. A medieval church, right in the heart of the City of London, it survived the Great Fire of London only to be bombed by the IRA in 1993. The ruins were elegantly integrated with new, expanded facilities (by Paul Vonburg Architects), and it reopened in 2001 as St Ethelburga’s Centre for Reconciliation and Peace, a social enterprise promoting cultural exchange and transforming conversations around conflict. Permaculture is a design system, evolved in the Sixties and Seventies, which aims to find a way of living that balanced the needs of people with the needs of the planet. It sparked the ‘Good Life’ or ‘Whole Earth’ model of living close to nature that was embraced by the hippy movement. Though it fell below the radar in the Nineties and Noughties, this design approach is re-emerging, with an emphasis on its relevance to urban communities.

Michel Thill, founder of Social Landscapes, was our trainer for the day, along with his colleague, Tish Vail, an interior architect by day, but looking to bring these principles closer to her work in the commercial world. A softspoken Belgian, Thill has spent the past few years as a Permaculture trainer, but also putting theories into practice in Lambeth – among other places – where he runs local food-growing and community projects, generating ‘urban cultures in which people and planet prosper’. But this work is not (just) about getting locals to grow vegetables in parks. Thill and Vail had recently visited refugee camps in Calais, looking to harness the skills and interests of the refugees themselves in order improve the conditions in the camps. In this way, says Thill, ‘they get a sense of themselves not as victims but as people able to play a valuable part in improving their situation’.

The one-day workshop was a truncated version of the more intensive, two-day – or even two-week – Permaculture design workshops that are available, but it was nonetheless effective in framing questions of how we design things for society and where the system is failing both people and planet.

First off we considered the patterns that have been established in nature over centuries – patterns that support and encourage diversity, adaptability and reciprocity. Then we were asked to discuss, in small groups, the dominant structures we have created for the production of energy, health and economic prosperity – namely hospitals, schools, power stations, supermarkets and parks. After this we shared our thoughts on the problems inherent in these man-made systems. Thill asked us to consider the links between the most problematic areas.

And our groups, in short, concluded that the most common links included: a tendency to isolate different departments within systems and to overcomplicate through bureaucracy and a lack of joined-up thinking (hospitals and schools); to put cost efficiency and ‘results’ before care and compassion either for those delivering services or receiving them (hospitals and schools); a profit-at-all-costs motivation underpinning services and pricing (energy production, supermarkets), leading to depletion and corruption of resources. The system, we agreed, is pretty much broke. This is when Thill introduced a few of the principles of Permaculture, and asked us to re-perceive the aforementioned institutions for health, education and wellbeing in terms of inputs and outputs. This reductive exercise helped to clarify the fundamental drivers that underpin – and afflict – our services. In this way, a service such as education could be perceived as input rich (in terms of bureaucracy, finances, training, building and maintenance, standardisation, assessment and evaluation) but output poor (delivering an education that is more about number-crunching than a love of learning; aimed at delivering children conditioned and assessed according to their value for the wider economic system).

The lightbulb moment for all of us came when Thill asked us to combine our groups and facilities in order to re-imagine a more joined-up solution that offered a greater balance between input and output. Blue-sky thinking was encouraged. In this way, we daydreamed, a hospital could join forces with a park, with patients (those fit and well enough) involved in planting and maintenance, thereby accelerating their recovery through fresh air and exercise; the negative aspects/outputs of park life (youthful loitering, drug and alcohol consumption) would be discouraged by the presence by so many hospital-related users (and possibly the visibility of those made ill by such activities!); the intermingling of generations, plus opportunities for volunteering (in foodgrowing, cafés, play spaces, sports areas) would enhance community connectivity and encourage the population to make better use of the park’s facilities – therefore leading to greater health and wellbeing and reducing strain on hospitals. Suddenly parks and hospitals, joined together in a virtuous cycle of mutually beneficial engagement, seemed not such a ludicrous idea at all.

I’ll admit that at first I felt the weight of cynicism dragging me down when I contemplated applying the utopian philosophy of permaculture to the hard-bitten, high-speed world of regeneration – as a Londoner, my primary concern. But, by the end of the day, I really did believe that a new way of designing could be utilised by and for urban communities, through permaculture principles.

These, for me, were best summed up by Thill’s three-bubble Venn diagram, which sticks ‘people care’ in one bubble, ‘planetary care’ in another, and ‘fair share’ in the third. It seems self-evident that the ideal design solution – of any kind – is one where all three areas can overlap. It may be tough to implement, but the beauty and simplicity of its design makes even this cynic feel that it would be worth trying.