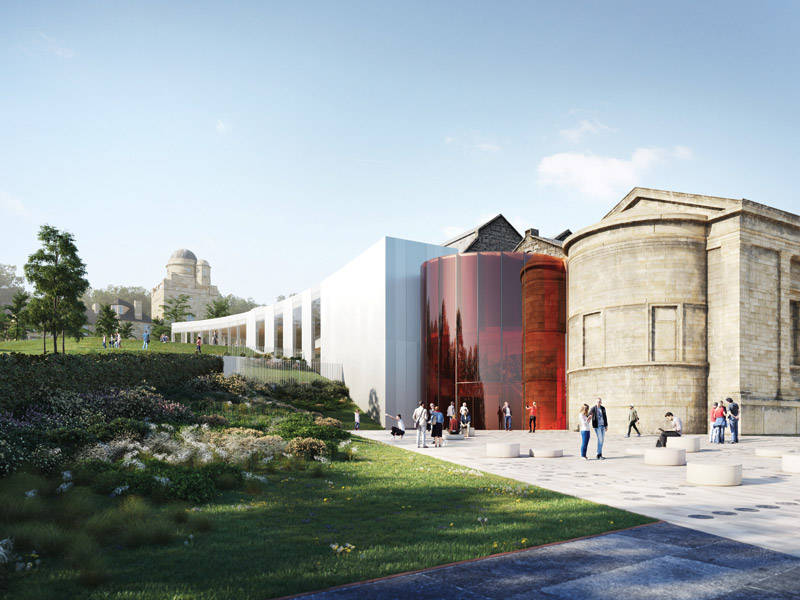 The first images have been released of AL_A’s proposal for the £42m transformation of Scotland’s Paisley Museum, set to reopen in 2022. The museum hopes to share the history of the Paisley pattern, the people who invented it, and the town where it was created with a wider audience. The 1871 building by architect Sir John Honeyman will be carefully restored, while the design makes bold interventions – to increase the museum’s presence on the local high street and on an international level.

Amanda Levete, AL_A’s Stirling Prize-winning director, praises the brief as ‘one of the most radical I’ve encountered’. She continues: ‘Paisley has a proud industrial past and a history of innovation and radical thinking. We have embedded this into our design to create an extraordinary place for the community of Paisley.’

The most noticeable addition to the Victorian building will be a contemporary, striking, red glazed entrance hall. The project will also include a new wing that will provide learning spaces as well as step-free access to the historic Coats Observatory. A new public garden and courtyard links the museum’s external spaces with the high street.

Internal renovations offer increased space for displays and a new cafe and shop, and will allow for greatly improved circulation in anticipation of visitor numbers quadrupling to 125,000 a year. New landscaping ensures the museum and its surrounds are accessible and meet international environmental standards. One special feature will be an interactive weaving studio that will promote and preserve the town’s signature textile knowledge for the future. Durham-based architectural practice Howarth Litchfield has been awarded the contract to design all of the workspaces for IWG Group’s Regus and Spaces brands.

The UK-wide development programme for one of the world’s largest flexibleworkspace providers is an impressive commission for the company. The programme covers both refurbishment of existing premises and new locations.

Three schemes have been completed so far: Aberdeen and Leeds for Spaces, and one in Norwich for Regus. Francesca Gernone has been appointed principal at HLW, the global architecture, design and planning firm. She will lead HLW’s growing London team, bringing experience of more than two decades in the industry. Gernone has a strong background in base building and interior work and before taking this role was head of interiors at Fletcher Priest. She said: ‘I look forward to bringing innovative interior design and architectural solutions to the firm’s various range of high-impact projects – pushing the boundaries of what’s possible in the built environment.’

Luigi Colani, the German industrial designer known for curvaceous ‘biodynamic’ forms has died aged 91. Colani worked extensively across product and vehicle design with occasional forays into clothing and city-design; examples of his work include the insect-like Spitzer Silo truck, Canon T90 camera, Pegasus grand piano for Schimmel, Hamburg police uniforms, and a 1970 Lamborghini Miura Le Mans concept. Ahead of his time, he influenced the now influential – such as Zaha Hadid. Colani died following a long illness.

Architecture practice John McAslan + Partners has been awarded planning approval for its £60m design to convert Osney Power Station into a residential teaching facility for the University of Oxford’s Saïd Business School – one of the world’s leading business schools. A mix of adaptive reuse and new buildings will transform the former Victorian power station based on the banks of the River Thames. John McAslan said the vision was to ensure the ‘internal volume of the power station is retained as an open “agora” [...] while the residential amenities celebrate the exterior setting of the landscape’. London-based architecture practice Freehaus has won an open competition to transform the Southwark home of The Africa Centre. Gunpowder House is a four-storey 686 sq m office block, and within this space Freehaus will create a cafe bar and terrace, an art gallery, a learning and research centre, meeting rooms and a broadcast suite. The site also includes two railway arches restored by Designers Block and Yinka Ilori. Arch 28 will host The Africa Centre offices and a co-working space called The Hub, while Arch 29 will be a pop-up performance and event space.

The overall design will be developed closely with The Africa Centre, whose board wanted to ‘appoint an architect who could draw directly upon their African heritage and experience’. Jonathan Hagos, co-founder and director of Freehaus, met that requirement, and describes himself ‘as a member of the Eritrean diaspora’, who ‘grew up with The Africa Centre in its iconic former home in Covent Garden’.

‘We want to draw from the provenance of the organisation over the past 50 years, while looking ahead to ensure its new home in Southwark has the same impact and cultural resonance for the next 50 years,’ he added.

‘We want to … envisage what an embassy for a continent might look like in the 21st century; a space that demonstrates what connects us and binds us to one another, whilst celebrating the dynamism of the continent.’

The project is backed by the mayor of London’s Good Growth Fund. The inaugural A Festival of Creative Urban Living will take place in Milton Keynes until 13 October with the theme ‘Built, Unbuilt and Unbuildable’. Milton Keynes, a 1960s new town, has a history of radical urban design, and the three-week event, developed by experimental architectural practice Raumlaborberlin, explores its legacy of utopian thinking.

Installations include the Utopian Laundromat, exploring new ways to wash and recycle water; ‘Beds United’ – an unusual scheme where locals offer visitors a bed for the night; architectural tours and a ‘cycle-in cinema’, as well as discussion, music, performances and workshops. The city is bidding to be a European Capital of Culture for 2023; the festival, commissioned by Milton Keynes Council and funded by Arts Council England, should boost its chances. Outpost has been announced as the winner of the RIBA Great Place: Lakes & Dales international competition, launched to find ideas for flexible and affordable housing for the village of Burneside, South Lakes, Cumbria. The scheme is targeted at young people and hopes to increase the diversity of rural communities.

Outpost designed a live-work community scheme for the site focused around its design ‘The Longhouse’, which is based on a traditional long, narrow structure with different communal activities under one roof. Outpost’s simple update of the idea will be easy to assemble, low-cost and low-energy. The longhouses will have a ‘singular form, pitched roof structure with a large overhang, comprised of a steel frame, standard sinusoidal roofing sheets, and a build up of high-performing natural insulation’. Outpost plans for the walls to be made of prefabricated straw-bale panels, a natural and high-performing building material. Both straw-bale construction and the earthen/clay finishes for inner walls mean residents of all ages will be able to participate in the construction.

The arrangement of the longhouses offers a range of well-thought-out spaces for the community. Courtyards and passages encourage chance encounters, while allotments, play areas for kids, or smaller areas of tables and benches allow the residents to come together.

As a long-term project no dates have been set for getting planning permission, while discussion with landowners and development manager Igloo Regeneration will shape the masterplan for the site. A new business district is being constructed at the Royal Albert Docks in Newham, east London. Planned as 'London's next international business district', the 35-acre site is adjacent to City Airport, and will be served by three DLR stations and the new Elizabeth Line station at Custom House. Developed by Chinese firm ABP (London) with Stanhope Developments and architects and masterplanners Farrells, London, Royal Albert Dock will target the financial, high-tech, and knowledge industries and will be developed in phases, with phase one delivering 21 buildings on five plots.

Architecture and interior design practice Gpad London has appointed David Walker to the senior team as associate director. Walker joins after 13 years at Bennetts Associates, and has a background of high-profile projects across the workplace, higher education, leisure and residential sectors, plus a reputation for nurturing talent and creative collaboration among colleagues.

A competition has been launched to design the National Railway Museum’s new Central Hall. As part of a £50m masterplan by Wilkinson Eyre on the brownfield regeneration project York Central, the Central Hall will be a 4,500 sq m addition to the museum, bridging space between its existing galleries. It will include a new 1,000 sq m gallery, while shortlisted teams can propose enhancements to existing museum buildings. The project is set to be finished in 2025, the museum’s 50th anniversary.

PriestmanGoode’s exhibition Get Onboard: Reduce. Reuse. Rethink for the Design Museum aims to raise awareness of the excessive waste generated through air travel. The firm proposes rethinking personal habits as well as tackling the infrastructure of air travel, with sustainable materials offering eco-friendly alternatives for products and processes. The exhibition runs until January 2020. 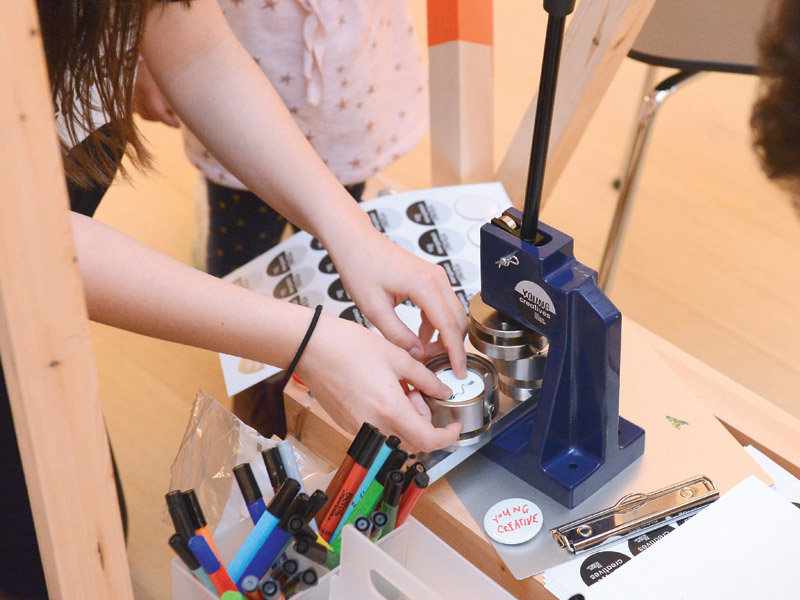