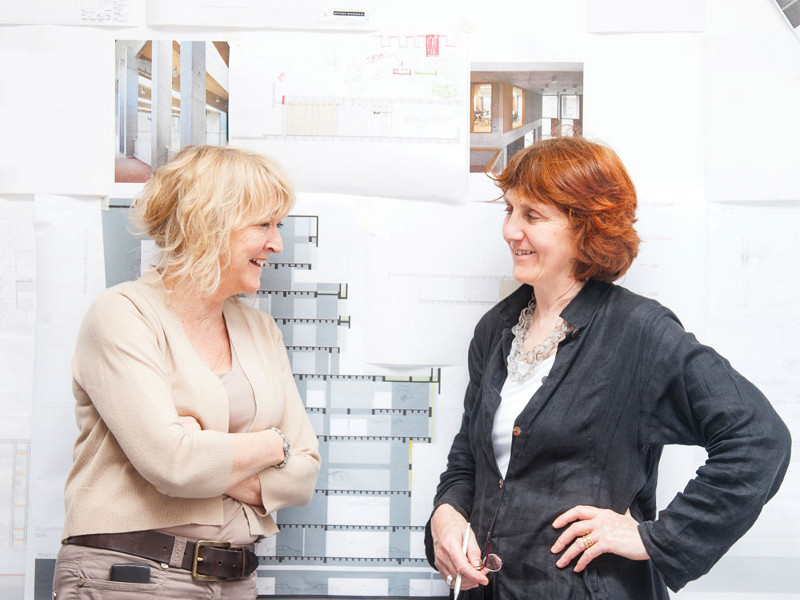 Grafton Architects, led by Yvonne Farrell and Shelley McNamara, will be awarded the 2020 RIBA Royal Gold Medal. The prize is the UK’s highest honour for architecture, given for having had significant influence ‘either directly or indirectly on the advancement of architecture’. Grafton’s win this year marks only the second time in the prize’s 172 years that a women-led practice has won. Zaha Hadid was the first, as recently as 2016.

Since the Dublin-based cooperative practice was set up in 1978, it has built across typologies with a strong focus on educational buildings. It won the inaugural 2016 RIBA Stirling International Prize for a ‘vertical campus’ for a specialist engineering university (UTEC) in Lima, Peru, while current projects include those for LSE, Kingston University and University Toulouse 1 Capitole. Its influence is also felt via teaching and lecturing across the world’s leading universities, and through the firm’s curation work, including for the 2018 Venice Architecture Biennale, with the theme of ‘Freespace’ following Grafton’s ethos and emphasis on humanity and generosity.

In response to the win, Farrell and McNamara said: ‘Like architects around the world, everyone in Grafton Architects works hard to give each project the attention needed to hopefully enrich people’s lives. For us, architecture is an optimistic profession, with the opportunity to anticipate future realities. It is of the highest cultural importance because it is the built enclosure of human lives. It translates people’s needs and dreams into built form, into the silent language of space.

‘We share this honour with all our clients, design teams, contractors and colleagues – past and current. Working together, we translate ideas into reality.‘

The new Virgin Atlantic Airbus A350-1000 aircraft shows the firm’s continued investment in a more sustainable fleet. Powered by Rolls-Royce Trent XWB engines, the A350-1000 is designed to be 30 per cent more fuel- and carbonefficient than Virgin’s previous aircraft, while reducing the noise made at airports by more than 50 per cent. The cabins have also been redesigned and upgraded by Virgin’s in-house team. Further investment includes an order of 14 Airbus A330-900neos, with a further six as options. These planes are designed to be 13 per cent more fuel- and carbonefficient than those they will be replacing. Virgin’s investment ensures that every one of its planes will be replaced over a 10-year period.

A ‘Designing for Circularity Primer’, issued by London’s City Hall and the Mayor’s Design Advocates (MDAs), provides guidance for how new developments in the capital can build in a sustainable manner by following a circular economic model. Penned by Sunand Prasad (co-founder of architects Penoyre & Prasad and one of the MDAs), as part of the mayor’s Good Growth by Design programme, the text discusses how to embed circular economy principles into projects and processes. Exemplar projects and firms are included – for example, Interface is namechecked, alongside an upcycling service for the built environment called harvestmap.org.

Three property developers – PegasusLife, Anthology and Renaissance – have announced a merger to form Lifestory Group, with the aim of providing homes for customers at every stage of their lives. PegasusLife Group CEO, Mark Dickinson, becomes Lifestory’s CEO, with three regional directors reporting to him. The collective portfolio currently includes around 50 projects, but the new group has plans to double this in the next three years.

Tim Marlow, currently artistic director of the Royal Academy of Arts (RA), has been named as the Design Museum’s new chief executive and director after Deyan Sudjic and Alice Black stepped down as co-directors. Marlow is a curator, writer and broadcaster, and trained as an art historian. Before moving to the RA in 2014 he was director of exhibitions at White Cube. He will start in January 2020, and says: ‘The opportunity to build on the impressive work … done in promoting the central importance of design and architecture in shaping our world is phenomenal.’

The Spanish Ceramic Tile Manufacturers’ Association, ASCER, has launched a specific DAP for products in the sector. DAP is an international eco-labelling system for the construction industry that determines and certifies the environmental impact of products cradle-to-grave, helping ensure eco-efficient manufacturing and building. The London and New York-based creative digital studio created all the digital elements across the galleries, which stretch over 10,000 sq ft of space. The team’s expert knowledge and its specially developed tools are integral to design processes that blend technology and creativity. Squint/Opera used its data-driven VR design tool Hyperform in order to build a 3D visualisation of the Empire State Building’s interior. Roomscale experiences can be designed using the tool, allowing projections, animation, live action and immersive elements to be integrated, bringing the building’s past back to life. These are further enhanced by the musical and sound elements contributed by Antfood.

The galleries move from a bustling street scene through to the construction of the building – in an experiential version of Lewis Hines’ famous photographs of construction workers, complete with steel beams flying overhead – to a 1930s office that would have been in the Empire State Building being invaded by King Kong. The ape’s giant hands have clawed through the wall, made more menacing by sensors that create physical sensations when approached. Previously, Commune has designed Ace Hotel locations in Palm Springs, Chicago and Los Angeles. For this project, Ace Hotel Kyoto, Roman Alonso of Commune commented that ‘the design concept for the hotel is rooted in an exchange between East and West through arts and crafts’. Interiors take inspiration from Charlotte Perriand, and JB Blunk, two Western designers influenced by Japanese design, while artists and craftsmen from Japan will also be involved – a high concentration of them from the local Kyoto prefecture. The hotel will open in spring 2020.

DesignJunction, based in King’s Cross during London Design Festival (19-22 September), featured a powerful installation by award-winning designer Steuart Padwick. Titled Talk To Me, it sought to highlight the topic of mental health in support of the anti-stigma campaign Time to Change. Two 5.5m figures were installed in King’s Boulevard, King’s Cross, that were intended to invite engagement with the public on the subject of mental health. As visitors approached the sculptures, gently ‘breathing’ in their resting mode, a sensor was triggered and the sculptures spoke uplifting words written and recorded by poets, writers, actors and mental health ambassadors, highlighting the importance of talking about mental health as a way to release some of the burden of a sufferer, or in this case, the sculptures.

Realised in Douglas Fir, the sculptures have a material warmth to contrast with their cuboid shapes, and an innovative Hi-Macs surface was used that allows light to seep through its cracks. Other design industry partners included Armourcoat, which sponsored the project, and consultants Hoare Lea, which worked on the light and sound elements.

Although DesignJunction is over, the figures have a future home, moving to Cody Dock, a new park in Canning Town on the banks of London’s River Lea. Padwick has previously created public works for Time to Change, including the illuminated riverside sculpture Head Above Water in 2018.

Charles Jencks, the co-founder of the Maggie’s cancer care centres, has died aged 80. As well as co-founding the charity with his wife Margaret Keswick Jencks, after whom the charity was named following her death from the disease, Charles Jencks was an architectural historian, landscape designer and cultural theorist. The Maggie’s concept is based on design-led, non-institutional spaces for cancer treatment and care. Built by world-class architects, there are currently 24 centres across the world. As a leading theorist of postmodern architecture, Jencks authored numerous books, while his landscape design work included Cells of Life at Jupiter Artland (pictured). He passed away on 13 September at his home in London.

Lancaster University has launched its School of Architecture, led by inaugural professor Ruth Dalton, to ‘rethink things from scratch’ for the current ‘rapidly changing world’. Dalton describes the concept as ‘radical creativity with a conscience’. The school will have a researchdriven focus, but will engage students in practice, with local projects as ‘testbeds’. The BA (Hons) Architecture course is open to applications for October 2020 entry, while the Masters of Architecture hopes to be open to applications for October 2021 entry. The university is looking to have ARB and RIBA approval for both courses.

Edward Williams Architects has completed a new office for a sustainable agriculture investment business in Paddington, London. The part-restoration, part-rebuild of a 210 sq m mews is a zero-carbon project that uses renewable energy purchased from a sustainable source. In order to preserve the historic feel of the mews, much of the existing fabric has been retained or restored, and where this is not possible natural materials have been used, including oak joists and oak panels that line the walls. One of the client’s criteria was for the practice to create a modern industrial aesthetic inside the office. The team achieved this via moveable glass partitions that allow for reconfiguration, and by using dark grey painted steel throughout. The contemporary but characterful building features lighting by Tom Dixon, BEGA and Kreon, and furniture pieces from Herman Miller Aeron Chairs and Hay Frames.

The Design Guild Mark, awarded by The Furniture Makers’ Company, is now accepting applications for the 2020 competition. A new category for Lighting Design has been launched, joining the existing categories for furniture and textiles, wall coverings, surfaces, carpets, and floor coverings. The prize recognises design excellence in furnishings made for volume production. In addition, the Jonathan Hindle Prize for the best piece in each category has a £1,000 cash prize. The deadline for early-bird entries is 28 November 2019, but the final deadline is 23 January 2020. 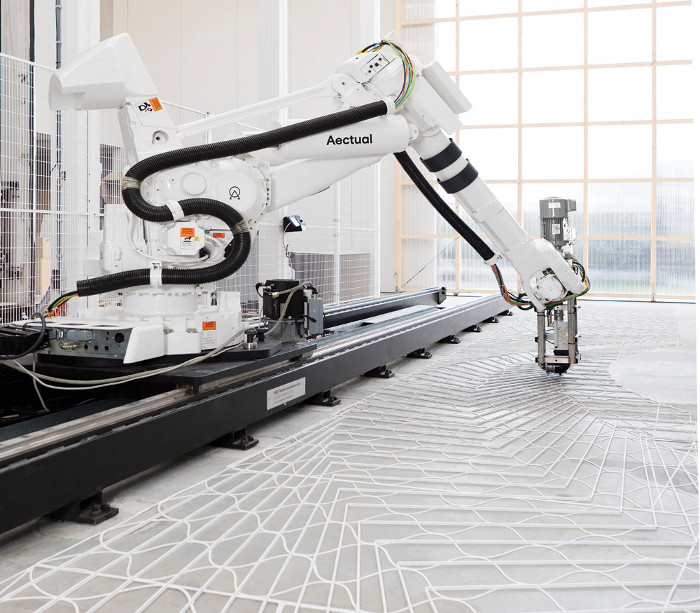