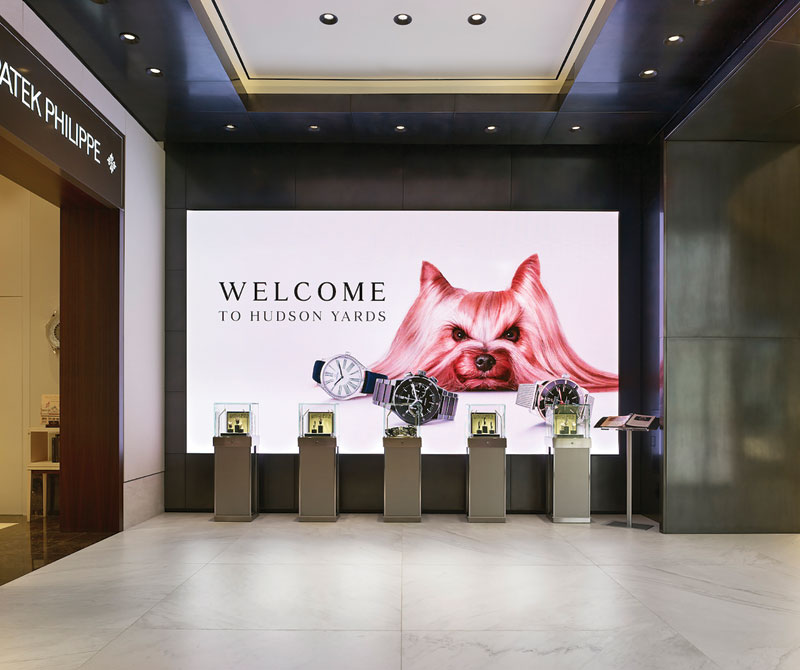 Luxury watch and jewellery retailer Watches of Switzerland has cemented its New York presence with a second flagship in the city, located in the new Hudson Yards development. Following the success of the first flagship store, opened in November 2018 in SoHo, the design team is once again London-based consultancy Capelo in collaboration with New York’s MNA. At The Shops at Hudson Yards, this 6,500 sq ft retail space is centrally positioned in the Great Room atrium, with a 110ft four-bay frontage facing the public plaza, and an internal storefront in the mall of 160ft. This breadth of street presence was intended to visually connect the store to its surrounds, offering itself as an inviting social space, drawing customers in with a curved white onyx storefront and digital wall. The feel of contemporary luxury is expressed through the finishings and colour palette, which is neutral enough to house individual brand installations around the perimeter of the store, as well as cohering installations within a central multi-brand area. Brand partner Patek Phillipe enjoys its own boutique directly across from the bronze-clad entry foyer, while Rolex has one on the opposite side. The store also has its own cocktail bar, continuing the store experience with the same palette of illuminated onyx, marble and bronze, in which customers might enjoy complimentary refreshments and take in the views of the surrounding development. An educational innovation comes from new project the School of Speculation: an architecture and design summer school organised in partnership with the Design Museum, the South London Gallery and the Anise Gallery in London. The two-week programme aims to provide critical design education that is affordable and accessible to a group of 20 applicants, with contributing speakers and workshop coordinators including Jack Self, The Rodina, Assemble, Daisy Ginsberg, Extrapolation Factory, John Walter, (Ab)normal, and The Bakerloos. Applications closed last month, but more speakers and events will be announced.

The National Infrastructure Commission has announced the 10 members of its new Design Panel. Headed by Sadie Morgan, Stirling Prize winner and founding partner of dRMM Architects, the commission was set up last year. In its first assessment it announced that the inclusion of design at all stages of planning and delivery will ensure more cost-effective, higher-quality designs are provided for the UK public.

The new Architecture MSci is an integrated Master’s degree that compresses the Part 1 and 2 route of architectural education to five consecutive years with a final placement year included. As it awaits ARB Prescription and RIBA Candidate Status for Part 1 and Part 2 accreditation, applications for the inaugural year will open this October, coinciding with 2019’s ‘Bartlett 100’ – celebrating a century of the institution’s work in architectural education.

While the Bartlett is ranked number one for architecture study according to the QS World Rankings by Subject and will continue its successful Architecture BSc (ARB/RIBA Part 1) and MArch (ARB/RIBA Part 2), the new programme aims to accelerate the educational model, saving students tuition and living costs, while the integrated placement year aims to provide a higher level of industry knowledge at an earlier stage of training. For the first cohort, due in 2020, the Bartlett intends to select approximately 15 students.

The winners have been announced for the 11th year of the Design Guild Mark. Awarded by The Furniture Makers’ Company, the awards celebrate and hope to drive excellence in British design – from the best British designers working anywhere in the world, to the best designers, from anywhere, working in Britain. Across the domestic and contract markets, in both Furniture and 2D categories, 22 designs have been awarded the Design Mark Guild for this year.

BW: Workplace Experts has designed the new London headquarters for GAM, an independent global asset management firm. The office takes four floors and 48, 500 sq ft of the BREEAM Excellent-rated building located at 8 Finsbury Circus, London. The space allows GAM to consolidate its three existing offices into one, bringing the employees together, and encouraging a culture of interactivity. Other considerations include high acoustic-performance specifications throughout the office, cafe, and kitchen spaces.

Joining Bjarke Ingels, who was appointed chief architect of WeWork last year, is Mexican architect Michel Rojkind, in the position of senior vice-president of architecture. Rojkind’s own practice, Rojkind Arquitectos, was formed in 2002 with an innovative and extensively social-minded approach that appealed to WeWork. The first joint-project that Rojkind and Ingels will undertake, and the first developed as The We Company, will be a 20,000 sq m building in Bentonville, Arkansas.

The Marcus Prize goes to…

Architect Tatiana Bilbao has been awarded the Marcus Prize for 2019. Half of the generous $100,000 award goes to the winner, with the other half going towards setting up a course for the University of Wisconsin- Milwaukee School of Architecture & Urban Planning (SARUP), which will be led by the prize winner. Bilbao was awarded the prize in recognition of her work through her studio, Tatiana Bilbao Estudio, a Mexico City-based practice and urban think tank, as well as contributions to lecturing and teaching internationally for the past 15 years. Previous winners include Jeanne Gang, Joshua Ramus of Rex, Sou Fujimoto, and Diébédo Francis Kéré. While restoration work takes place on the Palace of Westminster from 2025 to 2033, the House of Commons is set to move to a temporary chamber, located in Richmond House, a former Department of Health building. The plans, released in May by AHMM, show its proposal for the chamber. The proposal includes significant internal redevelopment of the Grade II listed 1980s structure, which has prompted outcry from conservationist groups, but retains the visible frontages on Whitehall and preserves other parts of what’s called the Northern Estate. The design includes an accessible public gallery and overall improved accessibility for MPs and visitors, while fulfilling the needs and emulating the feel of the existing chamber in the Palace of Westminster.

The Lowry Hotel, a luxury five-star hotel in Manchester, has had its 2,228 sq ft Presidential Suite renovated by Goddard Littlefair. The refurbishment of the penthouse suite cost £700,000, consisting of an overall redesign and reconfiguration, as well as new features such as a bespoke marble bathroom. The suite includes two bedrooms, two bathrooms, a walk-in dressing room, lounge and dining room, mini grand piano, in-room bars, smart TVs and an Amazon Alexa. Design features such as a timber bedhead take inspiration from the local area’s industrial history, and landmarks such as the Trinity Bridge over the River Irwell are seen from the windows. The Presidential Suite is the first in a series of projects by Goddard Littlefair for the hotel.