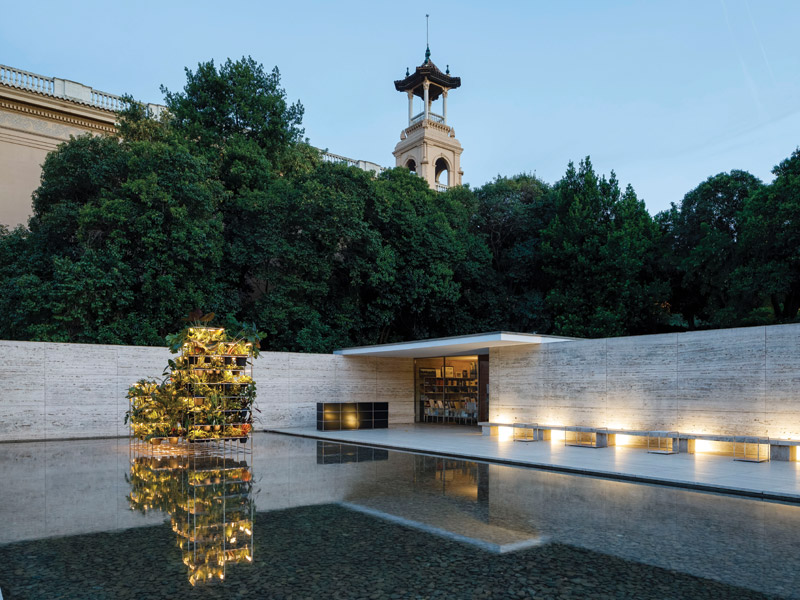 On Thursday 6 June, USM presented the latest instalment of its 15-year collaboration with the Fundació Mies van der Rohe. USM reimagined the Barcelona Pavilion as a workplace by using its furniture, including a living installation of plant-filled Haller storage in the large pond.

The original pavilion was designed by Ludwig Mies van der Rohe and Lilly Reich for the 1929 International Exhibition, complete with the iconic Barcelona Chair, designed specifically for the occasion. Dismantled in 1930, the foundation rebuilt the pavilion in 1986 in exact detail, using photographs and the correct materials: spectacular examples of Roman travertine, green Alpine marble and golden onyx from the Atlas mountains.

The foundation has since encouraged interventions on the site to locate it within contemporary architectural debate. Previous interventions were by Kazuyo Sejima and Ryue Nishizawa, Ai Wei Wei, Andrés Jaque, Enric Miralles, Antoni Muntadas, and Jordi Bernadó. USM once imagined it as a home, and another time the entire structure was overlaid in white (passersby apparently thought it to be a new Apple Store). A design competition run with Adeyaka BCN in collaboration with Herman Miller and Tecno led to this year’s intervention.

It was open to European architects, designers and students to reflect on the workspace design of tomorrow. Judging criteria included the boldness of proposals and the innovative integration of furniture. The winning projects were viewable on-site with the help of VR technology.
pavilionworkplace.com | usm.com

Designers in Residence for 2019 revealed Working with the theme ‘Cosmic’ London’s Design Museum has announced the four Designers in Residence for 2019 it will support and promote. This year’s selection is Marta Girait (wanting to demystify nanotechnology); Robert Johnson (reevaluating fat as a powerful resource with his concept of ‘Fatconomy’); Stiliyana Minkovska, with the ‘cosmic birthing experience’; and Mále Forés, who uses the surfaces of materials to create alternative narratives on key issues. Previous participants include Asif Khan, Giles Miller, Bethan Laura Wood, Yuri Suzuki and Sarah van Gameren.
designmuseum.org

BDG Architecture + Design has announced its expansion into the North and Latin American markets with the opening of a studio in New York to support a portfolio of new global projects involving clients such as Lego, WPP, Nike and Sony. BDG’s NY studio will be led by the company’s global CCO Colin Macgadie, architect Kelly D. Powell, and Rebecca Wu-Norman, a designer and artist with a multidisciplinary background.
bdg-a-d.com

A proposed Thames river project from Lifschutz Davidson Sandilands was launched at the Royal Academy’s Summer Exhibition last month. The ‘low-cost and low-impact’ pedestrian and cycle bridge at the Thames Barrier would provide an important crossing for the river – of London’s 30 Thames bridges, only one lies further east than Tower Bridge. The site is just upstream from the Thames Barrier, lessening impact on river flow, while the design is for a 530m-long multi-span, double-leaf bascule bridge.
thamesbarrierbridge.com

Milliken’s Artistic Liberties carpet tile collection has been awarded a Design Guild Mark this year. The collection uses Milliken’s Millitron digital printing technology, for a design that combines post-punk and street art influences. Artistic Liberties is made from Econyl yarn with 100% regenerated nylon, making for an innovative and sustainable carpet tile. The Milliken in-house designers responsible for the product were Claire Kimble and Helen Lloyd.
millikencarpet.com

KI made its Clerkenwell Design Week debut with a pop-up showroom at Paxton Locher House in London. Workshops were run by Plant Designs and Bute Fabrics, and KI’s new product launches included the Grafton chair, with its elegant yet durable perforated design suited for workplace and educational environments.
kieurope.com

The brief for its London presence was for a branded shop and cafe with the company offices above, plus Yeo Valley wanted to express its nature-inspired ethos and playful, friendly approach in this new public-facing space. The cafe is situated on Queensway, a West London area currently undergoing regeneration. Linking the design to the HQ, Phoenix Wharf enlisted artist-illustrator Natasha Clutterbuck for murals as well as artwork for special-edition products. A centrepiece is the ceiling lightbox installation of a stained glass-style abstracted map of Blagdon Farm. Surrounding this is an angled ceiling of white timber-style slats to reference the roof of a farm building.

Playful design elements include golden garden gnomes for table numbers, and an illustrated winking cow. The freshness of the produce is emphasised with cool colouring and blue undercounter lighting on one side of the space, while the dine-in area is warmer, with leather, wood and brick surfaces, brightly coloured seating and black marble tables. Black-and-white matt star-patterned tiles demarcate the grab-and-go and dine-in zones on either side, while a central off-white flooring section unites the two sides. Welcoming customers is backlit storefront branding with Yeo Valley’s heart-shaped identity above full-height windows and a double door entrance.
phoenix-wharf.com Moving from its original location in late 2018, specialist travel bookshop Stanfords recruited design agency Caulder Moore to develop a retail environment for its new store in Covent Garden. The design aims to bring its 160 years of heritage to a younger audience. The designers introduced a new focus on gifting, stationary and cards, an engaging children’s area, as well as a bespoke communal map table. Other elements include a double-height ‘illuminated wall’ of globes. The shop also hosts a coffee shop, creating a destination for to-be-travellers beyond Covent Garden’s busy streets.
cauldermoore.co.uk/stanfords

On 12 June 2016 49 people were killed in the Pulse nightclub in Orlando in a hate crime targeting the club as a LGBTQI space. In memory of those who lost their lives, the survivors and those who helped in the aftermath of the attack, the onePulse foundation will build the National Pulse Memorial and Museum, and the external ‘Survivors Walk’. An international open competition was launched for the design of the new memorial and museum, inviting interdisciplinary teams of architects, urban designers, landscape architects, exhibition designers and artists to create a new space of remembrance and acceptance. Halkin has designed a contemporary art deco office space in the heart of Mayfair, London. On the northeastern corner of Hanover Square, the offices were refurbished in collaboration with Meyer Office Solutions. The transformation of the space has involved minimal invasion into the existing fabric of the building, using bronze metalwork, polished Silestone and delicate lighting for an opulent reception. Spaces are light and airy while offering the comfort of a gentlemen’s club. In the office area features include a working fire, communal kitchen-cumbar, as well as breakout, library and lounge spaces.
halkin.com

Declare, ‘The Nutrition Label for Products’, aims to transform the materials marketplace for product specifiers and manufacturers with increased chemical transparency and a demand for healthier building products. Last month, Humanscale, which has currently published 60% of all Declare labels in the industry, shared their story at a launch event for the UK market. Declare aligns with multiple sustainability certification programmes including the Living Building Challenge, LEED and WELL.
living-future.org/declare | humanscale.com

Hailing from TP Bennett’s interiors division, directors Shane Kelly and Cristiano Testi have been promoted to principal directors and board members for the practice. Having been at the company for 15 and eight years respectively, both Kelly and Testi have been deeply involved in the growth of the interiors division. Testi has led projects for Facebook, Google and Spotify, while one of Kelly’s career highlights was designing the award-winning Guardian Media Group HQ at Kings Place, London.
tpbennett.com

Four of the awards we present at our annual FX Awards ceremony are chosen by you, the readers. We want to hear from you who of our shortlist should be awarded the following prizes: Breakthrough Talent, Product Designer, Interior Design Practice and Outstanding Lifetime Achievement. Last year’s winners were IF_DO, Jennifer Newman, Spacelab and Amanda Levete. Visit the website below to vote now.
???????fxdesignawards.co.uk/#reader-voted-awards