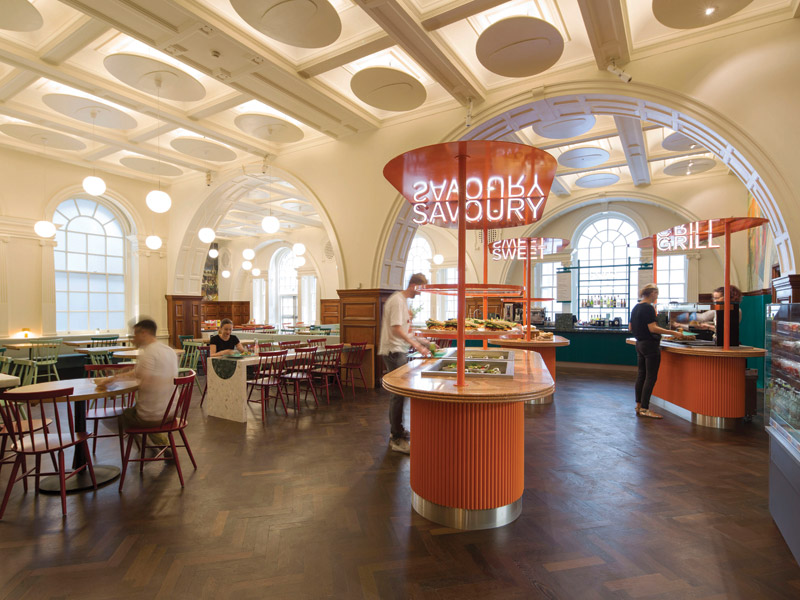 Though constrained by the building fabric’s listed status, LOT and Transit Studio have added pops of colour to the rich yet staid cafe interiors by picking up on the giant wall mural, while sorting out the queues

So far the redevelopments at the Royal Academy have been quiet. The new architectural interventions are not radical. But sensitive spatial interventions are allowing for a slowly building programme of events, all in celebration of its 250th year, dubbed RA250.

The transformations will be seen in the coming months, years and decades, when life starts to fill the new spaces created by such a transformative development. The Royal Academy will begin to occupy its reinvented home, not just with art, but also with learning, ideas and cultural change. But in one corner of the Royal Academy, the rebirth is immediately recognisable and the change rewarding. Collaboration between two multidisciplinary design studios, LOT and Transit Studio, brings direct transformation to two of the Royal Academy’s eateries: the RA Café and the Courtyard Café. Now the two new spaces will cater to the wealth of new visitors expected to come through the doors.

In the Grade II listed Burlington House, the two practices have reimagined the RA Café as its immediate context changes. The cafe remains in the same building, but previously it was in a more secluded, quiet part. Now, as the new link building embeds the Royal Academy into London’s public realm, the area has come alive; Chistopher Le Brun RA has dubbed it ‘the new Burlington Arcade’. As the link building requires a reimagining of the Royal Academy’s spatial programme, the RA Café’s offering must change. LOT and Transit Studio have created something much more specific to its changing needs. The main architectural shell is listed, thus they just retained and refurbished the historic panelling and parquet floor. With the interior, they were able to have more fun.

Leonard Rosoman’s mural ‘Upstairs Downstairs’ adorns the cafe’s walls and has done since 1986. Satirising the two worlds of the Royal Academy, it depicts the voracious crowds at the Summer Exhibition private view, atop the hidden bunker of the RA Schools with students eager to break upstairs. Timber panelling and the parquet flooring have been retained, but pops of colour are added with the seating

The artist’s wit takes on a new meaning; now the RA Schools are placed innermost to the new Royal Academy. The transition from RA Schools to Summer Exhibition is now being made clear and facilitated.

It is from this painting that LOT and Transit Studio have taken their colour scheme. The bright colours of the artwork have been drawn out to create a warm space – distinct from the gallery as having its own work and meaning.

This colour scheme permeates the playful materials that give the cafe its character. The deep greens of the marble columns and steps in the mural have been emulated in a terrazzo and marble mix to form bespoke counter tops. Painted dowelling in a complementing bluegreen colour fronts the counters.

This same terrazzo and marble mix forms a bespoke 10-seat dining table found in the lobby. Here, the orange in the background of the mural filters through into the geometric tabletop design, separated from the blue-green with two white circles. Contract wooden chairs, sourced by the contractor and custom sprayed in shades of green and red to suit the colour palette, balance the tables.

The new eating space is imagined as a marketplace. Individual island counters have been introduced, seeking to improve wayfinding with the canopy typology that includes integrated illuminated signage. Schematically the islands will limit queuing issues that the increase in footfall could bring; aesthetically, the bold orange references the iconic mural and ties together the playful colour scheme.

The same painted dowelling of the countertops is featured around the edge, and sitting on this is the same terrazzo and marble mix, both this time in shades of orange. ‘By offering a market stall ‘island counter’ approach we created an organic customer flow, making it just as easy to grab a coffee and cake as it is to pick up a three-course meal,’ says Charlotte McCarthy, director at LOT.

In the summer months, the cafe spills outward into the Royal Academy courtyard. This provided LOT and Transit Studio with a unique opportunity to create a venue grounded in its temporality. It is directly linked to its season, and as such the design can be directly informed by it with a vibrant mix of colours and materials. The kiosk service point itself is clad in blue Rimex mirrored stainless steel, reflecting an image of its immediate surroundings, and the central sculpture that changes periodically.

Adjacent to the kiosk, a large white canopy draws in new visitors and signposts the cafe. Underneath are Nolita chairs and bar stools by Pedrali in orange, turquoise and yellow. Accompanying these are splatter enamel tabletops, custom made by AJ Wells in reference to the creativity at play within the Royal Academy. If the new Royal Academy is about integration – into the community, of the two buildings, of its past and future – the new Royal Academy cafes do just that. An open, welcoming space, it invites the public in to see the art on its walls – through which the design story is told. A painting becomes a colour scheme, an exclusive club cafe becomes a space to welcome all, and the campus feels more united than ever before.

The transformation of the Royal Academy is largely yet to be seen; radical transformations that RA250 represents and the united campus affords, will emerge. In the new Royal Academy cafes, we see something immediately tangible. LOT and Transit Studio have made change that is material – and while not radical, still delights.