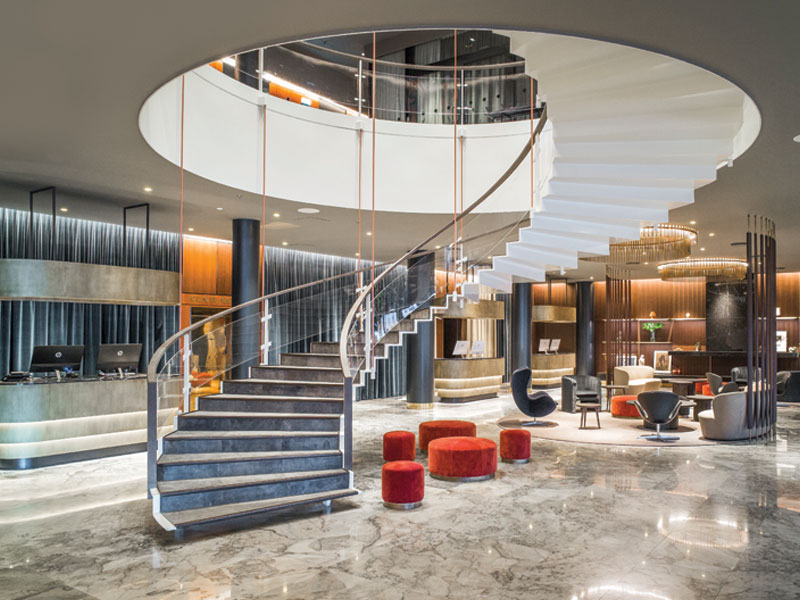 Jumana Shamma, interior designer at Halkin gives us her take on radical thinking

Can you pinpoint the thought, whether yours or someone else’s, that led you to a career in design?
I just knew I didn’t want to be a doctor like the rest of my family! Someone delivered a VHS of Frank Lloyd Wright to our house when I was a kid and I fell in love. Ten years later I started to train as an architect but preferred the interior element of design so became a designer.

In terms of the design and architecture industry, what do you consider the most radical era or pivotal moment?
Somewhat contradictorily, I think both the industrial revolution and the arts and crafts movement. This is because the industrial revolution made design accessible to everyone due to mass production, and the arts and crafts movement – more focused on traditional craftsmanship, looked in detail at the essence of design. Both are so critical when balancing a project’s speed, budget and design. Which radical thinkers have been inspirations to you in your career?
Zaha Hadid, probably because, like her, I am a Middle Eastern woman influenced by radical design and a sense of fluidity throughout everything I do.

Who are the radical thinkers who inspire you now? (Not necessarily forever or for a lifetime – just now!)
Right now… Arne Jacobsen who designed the [now] Radisson Blu Royal Hotel, Copenhagen. Specifically his suspended spiral staircase.

Who outside the industry can architects and designers learn from?
Tech geeks!

What will lead the way for more radical thinking in your/our field?
Technology is the radical frontier that we are living through right now, we’re wading out into unchartered waters and it’s exciting. Could you recommend a book/article/blog that inspired your thinking?
William Blake – Songs of Innocence and Experience.

Name two buildings/ pieces of furniture that you consider radical designs of their time, or perhaps still to this day?
Marc Breuer’s cantilever chair and Arne Jacobsen’s Egg chair.

I think best with … (for example, my hands/a pencil/with a computer)
Hands – unquestionably.

I think best … (for example, first thing in the morning/last thing at night)
The morning.

I think best when… (in a gallery/at home/ outside/over drinks/with friends/on the bus)
On the bus – it’s the only time I truly relax and just look out of the window and think.

The thought that keeps me up at night is…
Nothing; I’m good at switching off, which I think is very important with what I do.

The thought that gets me out of bed each day is…
I want to carve out a future that’s fluid. I don’t like sitting still and waiting for stuff to happen to me, I want to make it happen myself and I want to take my projects on the ride with me.

Do you like to think with, or think against?
I think with. You need to work with a building or a person or the people that will inhabit a space. Working against is when the ego takes over.

If you weren’t a designer/architect, where do you think your way of thinking would have led you?
Probably a therapist as I’m intrigued by the way people tick.

What’s the most radical thing you’ve come across today or this week?
Back to Arne Jacobsen for me – his spiral floating staircase.

Jumana Shamma was born in Italy to Middle- Eastern parents and grew up in south-east London before training as an interior designer. She is now an in-house interior designer for both Halkin and Meyer Office Solutions, a serviced office space provider and interior fitout company respectively. Her most recent work includes the luxuriously decadent 13 Hanover Square in Mayfair, a serviced office that feels more akin to a boutique hotel; the refurbishment of 10 Lower Thames Street in the City of London, and a project in Fredericksburg, Copenhagen that has seen her spend her thinking-time on a plane, not just in the studio.