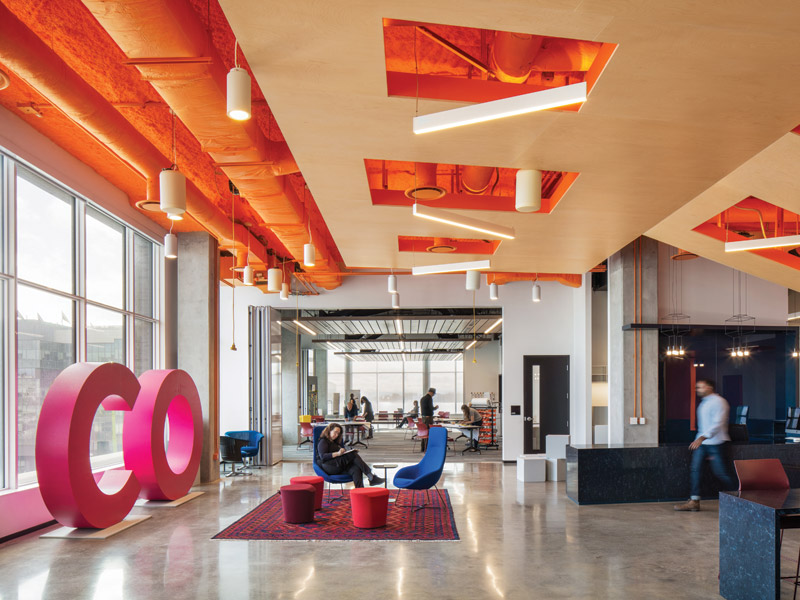 A new coworking and creative innovation business, OCAD U CO aims to build on the ‘legacy and reputation’ of the Ontario College of Art and Design – taking inspiration from its Will Alsop-designed 'Tabletop'

OCAD University (the Ontario College of Art and Design University) is well-known as Canada’s largest and – at 142 years of age – oldest educational institution for art and design, but architecturally it will be most likely recognised for its distinctive Sharp Centre for Design, the award-winning building by British architect Will Alsop in collaboration with Robbie/Young + Wright Architects. It is colloquially referred to as ‘the tabletop’ for its rectangular form balanced high up on legs above a park, and while critics at the time of its construction in 2004 believed it would soon be dated, 15 years after its completion it is still celebrated as a highlight in Toronto’s relatively uniform built environment. It is this ethos and legacy of innovation in design that the university desires to take into its new business venture: its creative innovation and training space OCAD U CO. While the building housing OCAD U CO is part of the mixed-use development Daniels Waterfront that does not have any architectural link to the Sharp Centre, interior design firm Quadrangle references the tabletop’s recognisable elements via the interiors.

The interior design uses bright colour blocking throughout, and the tabletop’s signature ‘pixelated’ corrugated aluminium facade is replicated in OCAD U CO’s bathrooms, via a graphically similar arrangement of black and white square tiles. These colourful and graphic elements serve as the visual counterpart to OCAD U CO’s USP. As the company’s executive director Kevin Morris explains: ‘The colour scheme is meant to be shockingly vibrant. You see a lot of muted blues in executive spaces. We wanted people to feel slightly unhinged.’  Unhinged? The design doesn’t seem like it would exactly unsettle its patrons, but communicates ideas associated with creativity and innovation: elements of play in a fluid and adaptable environment. Colour demarcates areas instead of physical barriers; informal meeting areas can be found in corridors, indicated by pockets of block colour, with wall, colour and custom furniture colour-matched to striking effect. Elsewhere, colour helps with wayfinding: locker areas, for example, can be identified by teal wall and floors complete with custom-coloured Hadrian lockers. The Sharp Centre for Design, part of the Ontario College of Art and Design. Caroline Robbie, project lead for UCAD U CO, Quadrangle principle, and also an OCAD U graduate, was familiar with the design language, having worked on the Sharp Centre project previously. Image: Tom Arban

But as with the Sharp Centre, the colourful sections are not jumbled together, but set against a neutral base palette of the white walls and polished concrete floors. In other areas the design toys with the usual application of interior materials: a pale wooden expanse that might otherwise be flooring is flipped to provide a suspended ceiling; playing with it one step further, this is not a uniform and level plane, but one broken up and angled in places, the gaps between sections revealing the exposed soffit. As a twist on the industrial stripped-back look, the exposed parts are painted a bright orange. The wooden panels are strategically placed to hide the mechanical and electrical elements that really do want hiding.

As might be expected of a building that provides for collaborative innovation, there is a mix of open spaces. There is the ‘transit zone’ for relaxed conversations over a drink or some food, and the more focused and secluded environment of the ‘innovation studio’.

Throughout, furniture, provided by Steelcase, Herman Miller and KI among others, helps to vary the feel and arrangement of the working environments. Elements such as bright yellow cable conduits marry flexibility with practicality, so that users might rearrange the furniture to suit their needs and still have a power supply. Note the intended similarity between the tiles in OCAD U CO’s bathrooms and the Sharp Centre for Design facade. Image: Adrien Williams

On entering the space, visitors are greeted by a reception area with striking, custom millwork desks, a scattering of white cubes (Pirouette rectangular nesting tables by KI) and most notably of all, two 7ft-high letters, a ‘C’ and an ‘O’, in bright pink. While much of the design communicates what is OCAD U about this space, these letters unmistakably announce the CO.