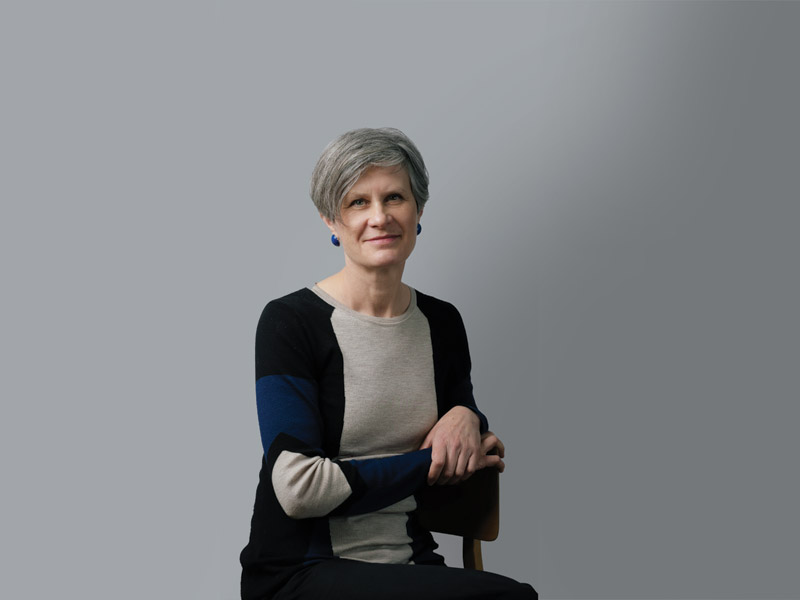 Sarah Wigglesworth had an unusual start as an architect: her practice, Sarah Wigglesworth Architects (SWA), was practically born into a media storm. Back in 1999 – five years after setting up her own studio – she and partner Jeremy Till were featured on Grand Designs’ very first series, constructing their own eco home on the edge of a railway line, near London’s Caledonian Road. A highly unusual building both in materials and design – a pioneering live/work space – Stock Orchard Street was really a live experiment around what it meant to build sustainably and affordably.

There were, understandably, many highs and lows – with the programme makers, as they do, milking as much drama as possible out of the lows. Looking back on it now, Wigglesworth says: ‘It was really bloody stressful. There is a moment where [presenter Kevin McCloud] says: “What’s your worst nightmare?” And I say: “That we’re just left with an empty frame and nothing happening.”’ At such an early point in any architect’s career, she says ‘it’s really only naivety and youth that drives you through. Because you’re inexperienced in your younger years you don’t realise what the risks are … you really don’t understand how difficult it’s going to be.

We just blundered straight into it. Including the media storm that came after it. I’m a different architect now. If I’d known at the time I might have thought twice about [doing the TV programme]. Everything was compromised – living conditions, finances, your professionalism, your detailing skills, your technical skills – and you’re out there in the public eye doing it. It was such a struggle at the time.’

However, she and Till – now head of Central Saint Martins – plus her expanding practice are still in that same distinctive building. So the experiment was clearly a success? ‘The rewards are great. I’m really happy here,’ she says. ‘In fact, we’re about to undergo another building contract here because we’re upgrading it. What was cutting edge 25 years ago is now quite naturally not cutting edge at all.’ Strangely, this bold scheme didn’t win them any friends within the architecture or green movement: ‘We were trying to find a way of bringing more innovation in architecture – because it’s not that innovative. This building really struck a chord with the public. But architects were completely bemused. It questioned the categories of high and low tech … We were making choices according to different kinds of categories. The aesthetic came out of the way we set rules, which were ecological rules.

We were trying to be good about carbon footprint and toxicity and making decisions on that basis. Aluminium was out because it’s so poisonous and it destroys the land it’s been mined from.

‘But the green movement didn’t like it. They thought we used the wrong products the wrong way … There is so much greenwash that goes with standard products – it’s really wrong. What’s missing is independent data on all of these products, which goes across all the categories: use of water, transportation, toxicity, carbon capture, etc.’

It took a little while, but their peers eventually caught up: in 2012 Wigglesworth was the first woman to be given a Royal Designer for Industry award for architecture, and in 2015 Architects Journal ran a reappraisal of the project, asking ‘is this the most influential house in a generation?’

Now, she says: ‘This building has enforced the ethos we believe in. It will never be copied because it’s completely unique.’ Strangely, until a couple of years ago, the practice had not been offered another private residential project.

But they have gone on to design exemplary public schemes, from housing through community centres to outstanding green school buildings – Sandal Magna School (2010) in Wakefield set a new standard, both for its passive, sustainable design and the collaborative process through which it was created. Mellor Primary School (2015) is an inspired contemporary take on a Forest School. Unlike many of her male contemporaries, Wigglesworth is more interested in finding a design that reflects the needs and aspirations of the people she is dealing with – in this, I suggest, she is closer in spirit to the radical, experimental practices that have emerged over the past decade, such as Studio Weave and Assemble.

Interrogating architecture and its uses through teaching and research has fuelled Wigglesworth through most of the practice’s life; from 1999 to 2016 she was Professor of Architecture at the University of Sheffield, establishing the PhD By Design in 2002. While there, the department kicked off a major research project into third age housing. Called Dwell (Designing for Wellbeing in Environments for Later Life) the research and findings have gone on to inform Sheffield Council’s housing strategy.

Wigglesworth says: ‘The housing sector essentially treats its market as a series of brand products targeted at specific age groups. Generally, they are building for small families, first-time buyers … Retirement housing is its own niche – usually assisted living or extra care (if local authority). In the private sector it is a big complex with other facilities on offer, from basic right up to the more resort-style, prestige developments, which are really gated communities. It’s all being driven by a business model that is very institutionalising.’

The Dwell research, in contrast, demonstrated that ‘people live longer and better in their own homes. A move into residential care is a transformative event, and not usually for the better. People would rather be independent and autonomous. Seven out of 10 people in Sheffield said they would be really interested in downsizing to smaller spaces, but only three in 10 do it. Why? Because the product they want isn’t there – not in the right place at the right price.’ Intergenerational housing is where smart new neighbourhoods are heading now, but that needs new typologies – something Wigglesworth is exploring with an extension to one private residence that’s about to complete. The practice is also working with Ebbsfleet Council, putting together elements of a masterplan towards ‘a healthy garden city’. Says Wigglesworth: ‘They are really interested in how to embed health in every aspect of living there. For example, making the public realm really attractive and beautiful draws people out, and when people like to go out and about it means there are more people in the public realm, so it’s safer. It’s about making the whole town’s strategy work. We have done about five projects with them now.’

With education, the practice has a great track record for designing inspired and quietly (or quirkily) enriching refurbishments that create better functioning, more socially sustainable spaces. Wigglesworth also finds time for campaigning, being outspoken on gender issues. She was on the jury for RIBA’s Gold Medal prize two years in a row, and argued for Denise Scott Brown – for her influence as much as anything. She was shouted down both times, but hasn’t abandoned the fight. In March 2019 she spoke at the Glasgow School of Art’s inaugural Missing in Architecture conference, about the need to recognise the contribution of women and how to work towards genuine equality and inclusivity.

But spring 2019 also sees her happily engaged in planning a programme of activities to celebrate her practice’s silver anniversary. From March to October SWA is sponsoring an artist in residence. Selected from 150 applicants, Becky Shaw will be working in the studio, producing at least one piece of work and an exhibition at the end of the year, with her work shown alongside the studio’s. There will be a round table on education, a talk on the role of the physical and tactile in the era of digital, at SDS, and a cycle tour of SWA buildings during Open House, from East London to Kingston.

Looking to the future, Wigglesworth would love to do another similarly challenging cultural project like SDS, but says: ‘It’s quite hard to get work like that when you’re not in the 6a echelons, or working with the V&A. Working with Siobhan Davies has been one of the richest and most fulfilling things I’ve ever done … There are things we learned and explored in SDD that we have not had the chance to pick up on or expand.’ Cultural leaders, please take note.