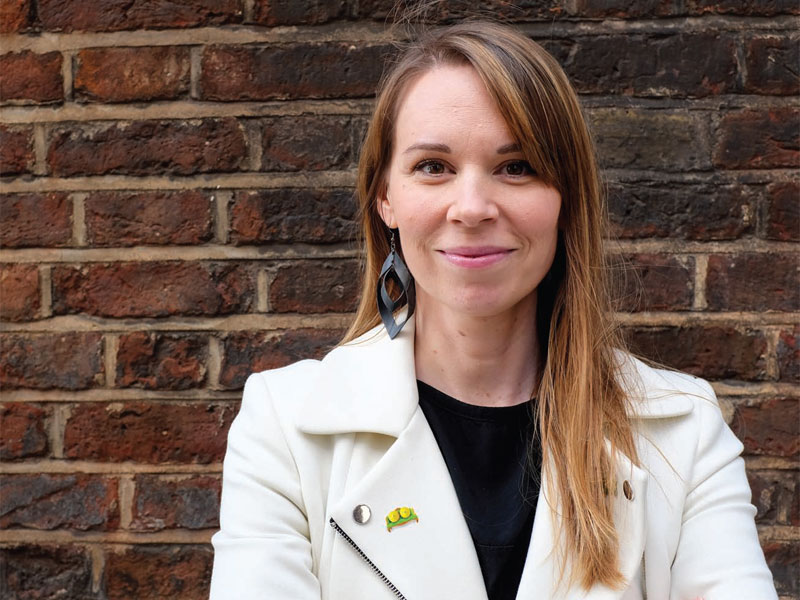 A trained graphic designer, Corrine Beaumont was spurred into action by the deaths of three close people from breast cancer into designing easily understood graphics to spread knowledge about the disease to a wide-as-possible audience

Corrine Beaumont is a name that very quickly found its way into news stories all around the world earlier this year after her work, being used for breast cancer charity Worldwide Breast Cancer, went viral on social media. It’s because Beaumont is responsible for innovative ways of helping identify both common and not-so-common symptoms of breast cancer, which have now worked their way to audiences all over the world. But what is unique about her story is that Beaumont is not a medical doctor, but a designer.

Her PhD is in design and healthcare, and she quit her full-time lecturing job at Kingston University to dedicate her time to solving what she says is a ‘design problem’ when seeking out breast cancer information. It was a project she started in the mid-2000s after losing both grandmothers and a close friend to the dreaded disease.

Today, she dedicates her time wholly to her Know Your Lemons campaign, part of American-registered charity Worldwide Breast Cancer and a project born out of her PhD research, featuring a very zesty metaphor to communicate awareness of breast cancer around the world.

‘When my second grandmother died from breast cancer I started to be concerned for myself; I didn’t know if I should be getting a mammogram or at what age I should be getting concerned about things,’ explains Idaho-born Beaumont. ‘I was in my early 20s so I went to a cancer library, and asked what I thought were very simple questions: What does a lump feel like? Is my risk normal or high? When should I be getting a mammogram? And the people there really weren’t able to answer these questions, because people in their 20s don’t normally go into cancer libraries.’ Beaumont recalls having an overwhelming sense of confusion and concern, and being stumped by the apparent lack of information available about breast cancer for healthy people, or people living without cancer. She says: ‘It shouldn’t have to take two people dying for someone to get interested in a topic like this.’ Corrine Beaumont’s Know Your Lemons campaign includes a graphic for self-examination, and a visual guide to symptoms

A trained and experienced graphic designer, her strengths include branding, typography design, illustration and business start-up. Beaumont decided to use her design skills to produce clear and easy-to-understand information about breast cancer, which then formed part of her PhD research in design thinking and healthcare. She moved to the UK in 2006 to do it.

Of some of the material she came across during her studies, she says ‘A lot of the design was quite standard for the medical industry; there were lots of smiling faces, images of four women representing different races, and a lot of reading – it was very text heavy. It’s interesting because medical information is a lot about what you can see, but is often not communicated through visuals, but instead uses words and fancy terminology.’

Beaumont has reviewed breast-cancer medical information being distributed by numerous organisations in numerous countries, including the US and the UK, and noted key common themes. Some were, what she describes as, ‘scare tactics’, offering images of women with mastectomy scars, while other information sources would censor their visual communication by not showing a breast.

‘Some information [I’ve seen] will…try to make the disease look beautiful, using pink satin ribbons [to] represent something that is really quite ugly,’ she says. ‘The pink ribbon has a role, it’s been a powerful tool for raising awareness as well as getting people to campaign [for funds]. But, while we’re aware that breast cancer exists, we’re not actually well-educated about its symptoms.’

And this lack of education is partly down to awkwardness, she says. Beaumont recalls meeting women – and men – who were simply too embarrassed to look at pictures of breasts when being educated about breast-cancer awareness. Another issue she discovered was getting around the taboo – censorship – surrounding the public display of breast imagery, difficult in many cultures – including in the West and developed countries – with breasts regarded as sexual.

‘You may say, “We need to change the way people think about breasts”,’ says Beaumont. It’s a statement, but it does generate some clear questions: shouldn’t she be promoting a campaign using breasts and not lemons?

Doesn’t further censorship fuel the taboo? ‘But that strategy is going to take a long time and is an impossible task when you think about this on a global scale,’ she counters, ‘and so rather than trying to change the way people think, we can change the way people see. By using a substitute for a breast that’s not connected to the body, such as a lemon, then it makes it possible to do a lot of teaching because it’s a strong metaphor that’s not already used.’ Corrine Beaumont’s Know Your Lemons campaign includes a graphic for self-examination, and a visual guide to symptoms

So, the need to comfortably communicate information about the cancer was key when educating global communities, and a lemon is a strong metaphor. Indeed, a lemon couldn’t be a more perfect metaphor for breast anatomy; it has a nipple and skin, and when you cut it there are milk ducts and fatty tissue. And when you talk about a cancerous lump it is described as being hard and immovable, like a lemon seed. Beaumont’s communication material showcases this in a crystal-clear fashion, while producing a visually striking campaign suitable for all audiences.

The need for detailed information has been raised by a number of people, one being Erin Smith Chieze, who had breast cancer. A post on her Facebook page told of her frustration of being asked to showcase a heart on her profile to promote breast-cancer awareness. She was diagnosed with Stage 4 breast cancer shortly after conducting a self-examination and says ‘without having seen a picture randomly with real information, I wouldn’t have known what to look for’, in her public message. She accompanies her post with one of Beaumont’s colourful graphics, showcasing lemons in an egg carton: each one carefully Photoshopped to provide realistic visual examples of what breast cancer can look like. It has been shared some 45,000 times.

As well as being freely shared on social media, Beaumont’s campaigns have been popular with LGBT communities by promoting non-gender-specific information, as well as being popular in many countries for its non-race-specific visuals, Beaumont says. ‘It’s a reverse of traditional marketing techniques, which is to find a segment and tailor a specific message,’ notes Beaumont. ‘So, when you’re trying to reach the whole world with that same message it’s about not having a segment at all.

‘And these friendly yellow lemons, sitting in egg cartons, have this ability to communicate in a way that words can’t.