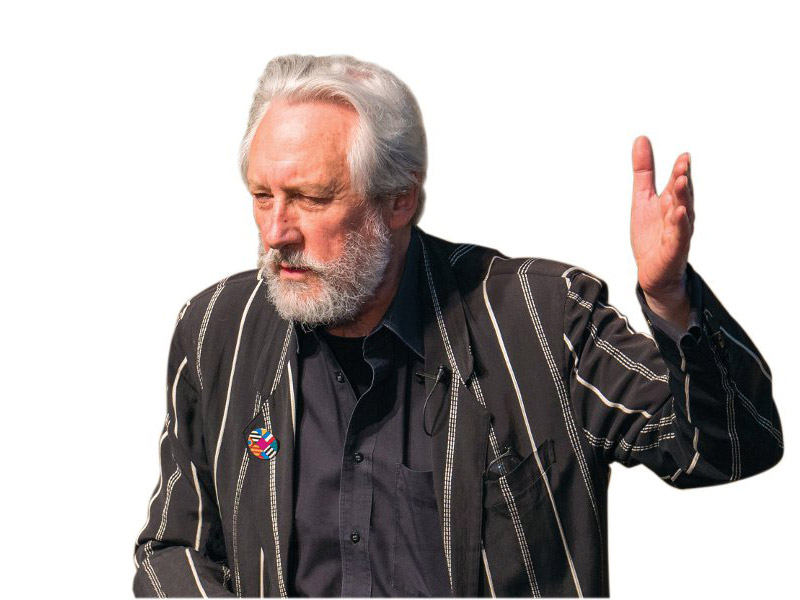 The creator of October’s cover for FX, Alan Kitching has been a leading light in graphic design for decades, garnering accolades and awards and a portfolio of clients that includes the National Theatre, Royal Mail and The Guardian. His latest book, Alan Kitching’s A-Z of London, is due out next year

Alan Kitching is no ordinary graphic designer. This man has a passion for letterpress print using old-style wood and metal blocks in a fine art capacity. No catalogue publishing for him. Alan Kitching is a man of letters: some are metal forms, others are wooden blocks. He has spent his life using letterpress techniques to create fine works that have conveyed information and evolved into much-admired and sought-after works of art. The first in Kitching’s large-format Broadsides, from 1988, designed to be cut up into individual items of stationery

Post-war Darlington was, perhaps, an unlikely place to foster the creative talents of a young boy destined for work in heavy industry or a factory production line, but Kitching was to prove the exception. With a talent for drawing and an inquisitive intelligence, Kitching’s school art teacher encouraged an apprenticeship with a local printer, his father having opposed a desire to attend art school on the basis that there was ‘no guarantee of a job’. For the new Alan Bennett play Allelujah! at the Bridge Theatre, London

He embarked on a six-year vocational training with J W Brown & Son as a compositor. Pre-computer and digital print technologies, Kitching – aged just 15 – learned the skills of typesetting and printing on the press in exactly the same manner ‘as Gutenburg had done 550 years before’, he tells me. He also discovered the value of refining his ideas by sketching a job’s layout – and this lifelong habit has filled hundreds of notebooks that reveal his imaginative approach to letterpress design. A1 poster for The Globe Theatre

What transformed his printing career was the time he spent as a technician at Watford College of Technology in the printing department, where Anthony Froshaug was the resident tutor. Froshaug was a hard taskmaster and instilled in Kitching rigour and respect for type and press conventions, while simultaneously challenging him to observe and innovate. In 1964 Kitching co-founded with Froshaug the Experimental Printing Workshop. He had left behind the conservative restrictions of the North East and felt liberated by the changing attitudes of the Swinging Sixties – in sharp contrast to what he was used to. However, he never forgot the austerity that he had witnessed as a child and remains a man with a deep social conscience for humanity and justice. In the early Seventies graphic design as a recognised career was in its infancy but Kitching foresaw an opportunity and moved to London to set up his own design practice. Later he joined Derek Birdsall and Martin Lee at Omnific where he established letterpress printing. At the time Clerkenwell was populated with printers, whereas today it is home to architects, and it was there that in 1989 he founded the Typography Workshop, dedicated to letterpress. To advertise his services he sent out a series of Broadside mailers: beautifully organised A1 sheets that suggested letterheads, compliment slips and business cards; depicted expressive forms of typography; and presented the heritage of print. These pre-empted his typographic maps of London districts. Kitching’s wit and skill attracted commissions from the media, corporate and public sectors, resulting in bold posters for the National Theatre, covers for The Guardian magazine and postage stamps for Royal Mail.

Meanwhile, meeting Celia Stothard at the Chelsea Arts Club was the beginning of a remarkable professional collaboration and whom he later married. Together in 1996 they purchased the Wrington types – an enormous, comprehensive collection of wooden fonts owned by a defunct West Country printer who’d created theatre billboards and programmes.

With the collection, now called Entertaining Types, they moved to Kennington where today Kitching’s studio is filled with compositors’ cases and hand-proofing presses. It is here you will find him with his letterpress, designing, setting and printing. His extraordinary output includes book covers, stamps, magazine covers, protest signs, theatre posters, wine labels and more. While digital technology has transformed the printing process, Kitching has adapted his skill as a compositor and printer into the craft of the letterpress artist – and using this traditional process, he has achieved world-wide renown.

In 1994 Kitching was appointed Royal Designer for Industry (RDI) and elected member of Alliance Graphique International (AGI). In addition to teaching there, he is an Honorary Fellow of the RCA and a visiting professor at the University of Arts, London. In 2016 Alan Kitching – A Life in Letterpress was published by Lawrence King. His latest book, Alan Kitching’s A-Z of London, is due out next year. Spirited discussions of political questions, for The Guardian newspaper

A man long past retirement age, and with no intention of doing so, Alan has just finished the poster for Alan Bennett’s new play at the Bridge Theatre, Allelujah!, and is pursuing his own projects. As a passionate Europhile his anti-Brexit banner, For *U*Ks sake stop Brexit, proclaims his dismay at xenophobic, parochial English sentiments. Alan Kitching’s A-Z of London is an artistic adventure to capture in type the essence of Kitching’s London. Each letter of the alphabet signifies the city’s landmarks and secret haunts, its personal pleasures and public realms, all in witty, graphic posters.

In all of Kitching’s work he has challenged the letterform and the letterpress, employing his knowledge and experience to make the tight discipline and constraints of typesetting, inking and repeating an art form. He employs rigour and wit; character and vivid colour. Kitching is an artist who has made the letterpress his own and who continues to influence and inspire a new generation of graphic designers and letterpress enthusiasts across the world.