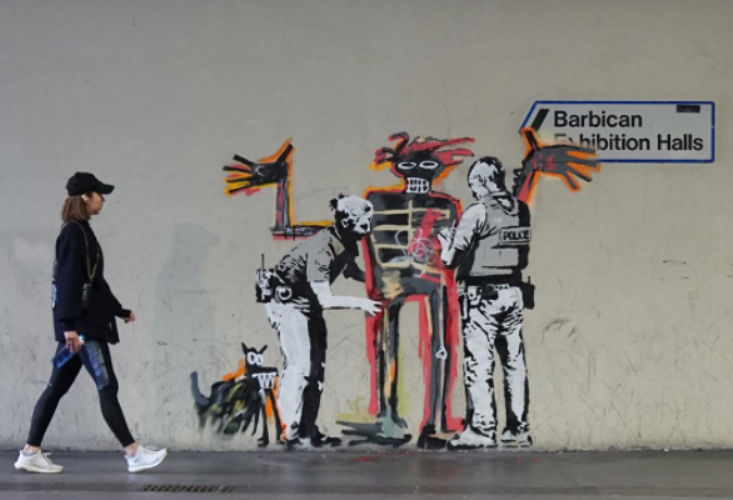 Street artist Banksy has been at it again. Two new artworks by the graffiti artist have appeared at the Barbican Centre, London, overnight.

The artwork appears ahead of the upcoming Jean-Michel Basquiat Exhibition at the centre. Banksy confirmed that the murals were genuine on his Instagram account, posting pictures of the work alongside captions that poke fun at the centre and gives a nod to former graffiti artist Basquiat.

The first mural depicts people queuing up to ride a Ferris wheel. The carts of the wheel have been replaced by crowns, a recurring motif in Basquiat’s own work.  Beside the Instagram photo of the mural Banksy wrote: “Major new Basquiat show opens at the Barbican - a place that is normally very keen to clean any graffiti from its walls.”

In the second mural, Banksy depicts Basquiat entering the Barbican and being searched by the police. The work appears to be strongly influenced by Basquiat’s style of painting and resembles his famous work entitled, Boy and Dog in a Johnnypump, produced in 1982.

On Instagram Banksy captioned the photo of the mural with: “Portrait of Basquiat being welcomed by the Metropolitan Police - an (unofficial) collaboration with the new Basquiat show.”

Perhaps Banksy’s piece is highlighting the fact that Basquiat’s work has been inexplicably absent in the UK art scene, with his work only appearing in two previous exhibitions in the last 40 years.

The show at the Barbican is the first large-scale Basquiat exhibition and comes nearly 30 years after the artist died from a heroin overdose. It will feature over 100 artworks, photography and film materials. The show also includes items that inspired the artist.

Banksy’s Barbican artwork is his latest work since he painted a Brexit inspired mural in Dover which depicts a man chipping away at the stars on the EU flag.

Acting as a sort of artist vigilante, Banksy’s often has a political edge and his latest work certainly seems to have something to say. He has often expressed disdain about his artwork being sold for huge amounts of money at auction and last week he donated the proceeds raised from the sale of his latest work to human rights charity Reprieve and Campaign Against Arms Trade.

Basquiat: Boom for Real opens at the Barbican Centre on Wednesday.