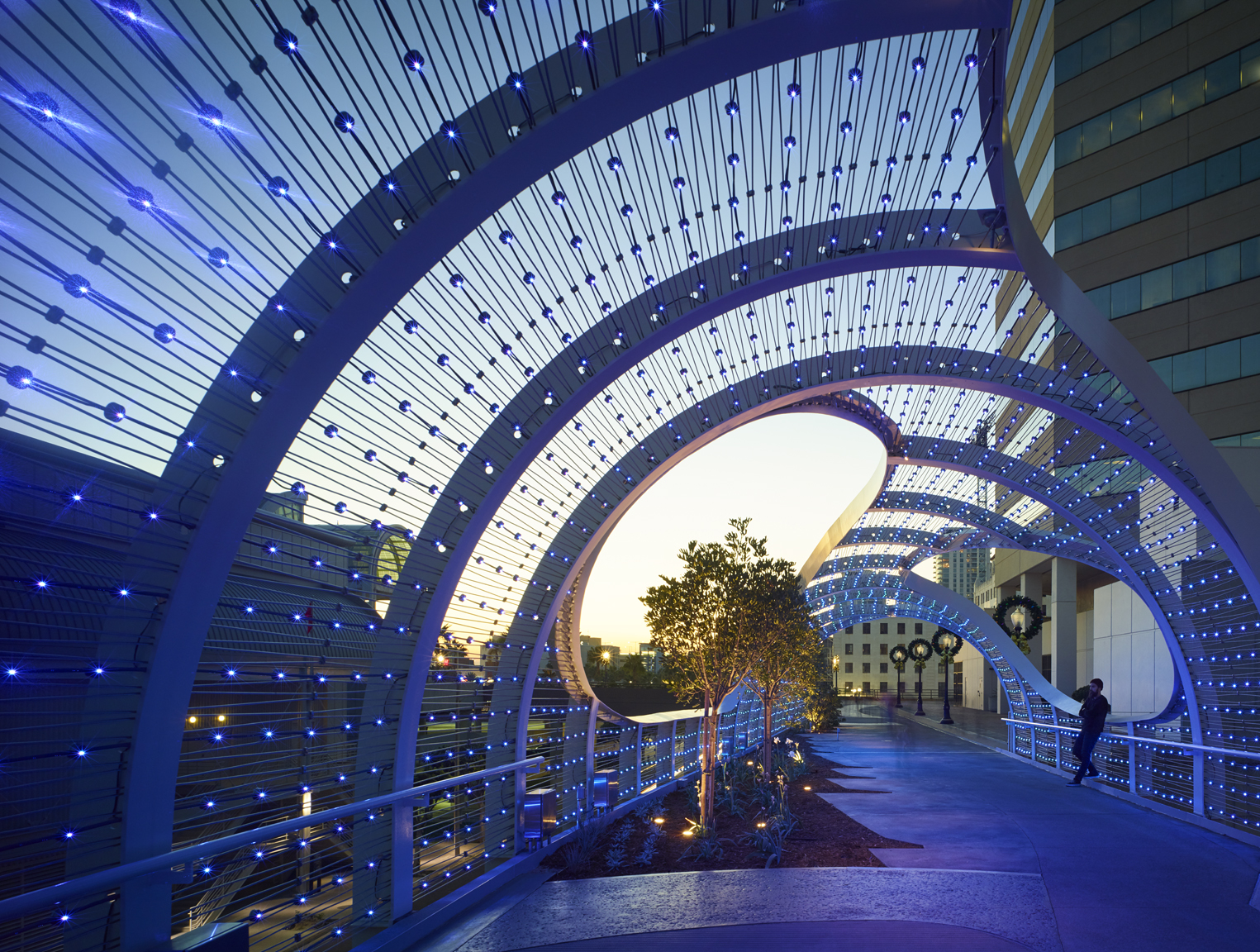 The reason for the project was that two major venues in Long Beach – the Convention Centre and the Performing Arts Centre – needed a connection that allowed attendees to circulate freely between both venues.Previously, visitors had to navigate flights of stairs and traverse the dangerous stretch of road known as Seaside Way, which was largely characterised by loading docks. At first, the solution to this issue was to build an elevated sidewalk, but this was then changed to the Rainbow Bridge design – a 600 foot pedestrian bridge framed by 76 custom welded bent-steel ribs. Within the bridge’s canopy, 3,500 colour changing LED lights were installed, which gave the bridge its iconic name. SPF:a mention that the Rainbow Bridge’s overall design was heavily influenced by imagery that “characterises Long Beach” – the structural concept of a ribcage, or ship’s hull, has been complimented by the elegance of rolling waves. The LED lights have been attached to the bridge by cables, and were designed in such a way that they “convey a net-like feeling or the rigging of a ship”. The design team have carefully managed to conceal all power sources and drainage systems on the bridge by putting them within the concrete spine beam that runs along the full length of the structure. By simplifying the steel geometry, modifying the concrete profile and adding a significant amount of greenery along the bridge, SPF:a have created a simple, but timeless design. The founder of SPF:a, Zoltan E. Pali, worked closely with the City’s Public Works Project Manager, Eric Lopez, and the CEO of the Long Beach Convention Centre, Steve Goodling, to bring the project to life. Interestingly, Seaside way is also a segment of the Long Beach Grand Prix race circuit, so it was imperative that construction was coordinated around the race schedule. The Rainbow Bridge’s opening ceremony was held just before the New Year – and though we are only 46 days into 2018, the project has already received the Honour Award for Engineering Excellence from the American Council of Engineering Companies of California. Providing visitors of Long Beach with a unique experience that reflects the area’s aura, the Rainbow Bridge is certainly a welcome, one-of-a-kind addition to the neighbourhood.