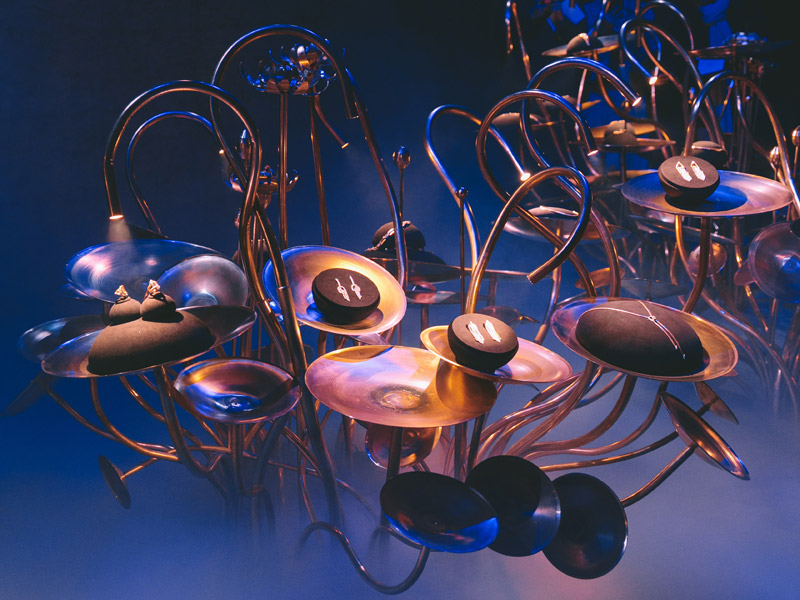 By definition, good lighting is such an intrinsic part of the overall design that the two are seamless and inseparable. There are also schemes where it might play a more overt, active role but is equally integral in the sense of underlining the intention and objectives of the project. Either way, the light is entwined with the design – it’s the way it’s been lit that clinches it, as the following three recent schemes demonstrate.

The Musicon Path in Roskilde, outside of greater Copenhagen, is a newly developed pump track that forms part of a new cultural area designed to create an exceptional experience for cyclists, skaters and bystanders. Part of a large research project examining innovative lighting solutions, the lighting concept is based on simulating the movement of water.

The system responds to the cyclists using the track by creating waves of coloured light as they move. As an incentive, the faster they move, the longer the wave of light. The aim is to help both the physical and psychological wellbeing of local users, especially during the dark Nordic winter.

The concept comprises two layers of light: an architectural layer and a behavioural layer. The first is both functional and aesthetically attractive, designed to ensure sufficient visibility for the users and for the general appearance of the area. The behavioural layer, the flow of light following the cyclists, creates ‘a playful interaction, both direct and indirect, between the users and the pump track’, says Light Bureau’s Frederik Waneck Borello. The lighting installation involves seven dark red-coloured poles along the 90m-long track, featuring 23 spotlights customised with honeycomb louvres to avoid glare. Each spotlight is controlled individually by DMX with the signals generated in real time by the lighting controller. Laser scanners (LiDAR) are integrated into the light poles, detecting and triggering the response to user movement. After 10 seconds, the lighting reverts to the standard neutral light setting. Sensors play a major part in the design and a substantial amount of study and testing was put into their positioning, which would have an impact not only on the general appearance of the installation during daylight hours, but also the level of the sensors’ performance and the likelihood of vandalism. The solution was to integrate the sensors inside the poles.

‘They react quickly and detect movement very precisely in order to measure the users’ activity, and achieve a functional site-specific and responsive lighting design,’ says Borello.

The pump track also has preprogrammed, dynamic, coloured light scenes that will reflect the municipality’s cultural and yearly events. The colour of the behavioural layer will be orange during the annual Roskilde Festival, a music event, for example.

‘The lighting design accentuates an urban park space with its own unique identity, inviting people to be playful and socialise at all hours,’ says Borello. The display was dramatised with a freeze fog effect. Image Credit: George Pahountis

Jewellery designer Nikos Koulis elected to use the Rodeo Gallery, in the area by the port of Piraeus, outside Athens, to launch his latest collection. An old industrial warehouse comprising two rooms, the setting afforded a gritty contrast to the opulence of the exhibits.

A series of organic copper sculptures, resembling plants with water lily flowers, formed the display structure in one room, with individual pieces of jewellery sitting on blossom-like bases. These were each highlighted with custom mini lights integrated into the stem-like elements that curve over the small display platforms. A variety of custom-made lenses were also attached to each stem to give the appropriate angle depending on the size of the exhibit. The display was dramatised with a freeze fog effect. Image Credit: George Pahountis

As it was crucial that the diamonds and other precious gems were literally shown in their best light, LED sources with high colour rendering (CR95) were specified. The fact that it was a temporary exhibition enabled a battery-operated system to be used, avoiding the complications of wiring and power feed. A battery is housed inside the base of each stem with an LED.

The display was dramatised with a freeze fog effect, resembling the mist over a lake and painted with subtly changed colours from overhead theatre spots (ETC’s Lustre 54 LED profiles). The new 130m-long Royal Wharf Pier, which replaced an existing, derelict jetty, is part of the Royal Wharf residential and commercial development on the north bank of the River Thames near the Thames Barrier. Stretching 40m over the river it’s reminiscent of traditional British seaside piers, albeit in rather more streamlined form. An angular 162 sq m public viewing platform with integrated bench seating sits at the centre of the structure allowing unobstructed views up and down the river.

The lighting is skilful in its simplicity and sympathy with the structure. As the pier is an embarkation point for the Thames Clipper, the scheme had to meet stringent Transport for London (TfL) passenger safety standards. But it was important that functionality did not compromise lit appearance, says DHA director Desmond O’Donovan. ‘While working to meet TfL requirements we wanted to create a memorable public realm for this new London neighbourhood.’

The waiting area is lit using linear lighting under benches and ceiling fittings carefully integrated into the folded aluminium ceiling, following its pattern. These have been positioned to ensure a good level of illumination for passengers. The floating gangway has linear lighting concealed within the handrail and directed onto the deck. Additional lighting at the base of the slatted wind break creates drama and illuminates the ceiling.

‘On conventional piers of this type, downlights would be used to provide illumination but we argued against this, citing the benefits of uplight to the slats,’ says O’Donovan. ‘Uplighting also meant we could limit the light level on the surface of the water, a requirement of the brief.’ The triangular viewing platform is lit using concealed lighting within the base of the perimeter glass balustrade, washing light across the deck. ‘This meant that no unsightly handrail would be required into which lighting could be integrated and that the glass balustrade could be completely clear for views up and down the river,’ says O’Donovan.

The fixed deck is lit in a similar way to the cover floating deck, linking all elements of the scheme.