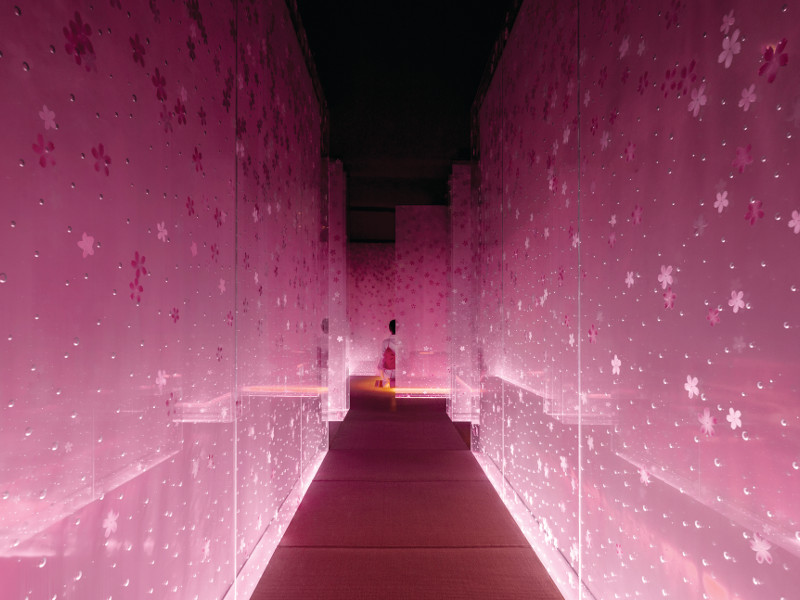 The Chinese interior design firm Shanghai Hip-pop has taken the ultimate step of fusing material and light for two Japanese restaurant schemes. Located in China, Setsugekka, Changchun, and Omakase, Shanghai, are designed along similar lines – rooted in Japanese tradition but with a very contemporary sensibility. Each brings together the themes of texture, colour, tonality and integration. The glazed walls of Omakase ‘form a delicate balance between openness and mystery, as people can see through but not enough to encroach on the privacy of others,’ says chief designer Sun Tianwen. Image Credit: Boris Shiu

Setsugekka, which translates as ‘snow, moon, flowers’, recalls an artistic theme from the Edo period that relates to the seasons: snow (winter), moon (autumn) and flowers (generally referring to cherry blossom, and depicting spring). This forms the inspiration for the palette of the interior of the restaurant, which specialises in kaiseki, traditional multi-course Japanese dining, analogous to Western haute cuisine.

High-clarity, low-iron glass is used for floor-to-ceiling partitions that break up the 1,300 sq m, four-storey space into multiple dining zones, many of them private, plus a large tea-drinking area at a long table. At the entrance, the glass is etched with a life-size rendition of a Japanese cherry tree. The cherry blossom motif appears on other partitions, the individual petals visible from close quarters but dissolving into a snowy winter scene in the blue light of colour-changing LEDs. These are installed in the coves that line the walls and are diffused with specially treated glass that produces a uniform, soft light.

The 160 sq m Omakase, also a kaiseki restaurant, has a similar labyrinthine and glass-partitioned (in this case semi-transparent) interior. As with Setsugekka, Shanghai Hip-pop was apparently inspired by the hyperreality of computer games and wanted to create a romantic interior that would make diners feel as if ‘they were a character in this magical scenery’. The lit effect is even more immersive than Setsugekka, featuring underlit, translucent glass floors.

Here the focus is specifically on the cherry blossom, or sakura, lending itself to the overtly pink light and evoking the idea of blossom petals falling in a gentle breeze, the ‘sakura rain’. The blossom motif is interspersed with raindrops.

The glowing pink glass is offset by the golden light of the private tatami room on the first floor, ‘which stands out against the pink interior, providing clear direction to the upper level. This solid block is also formed to allow a group to enjoy a more intimate experience,’ says chief designer Sun Tianwen.

‘Whether a kaiseki cuisine is attractive is just determined at the moment when one is entering the door,’ he continues. ‘The entire space is just like a freehand brushwork painting, in which every dinner becomes a part of the scenery.’