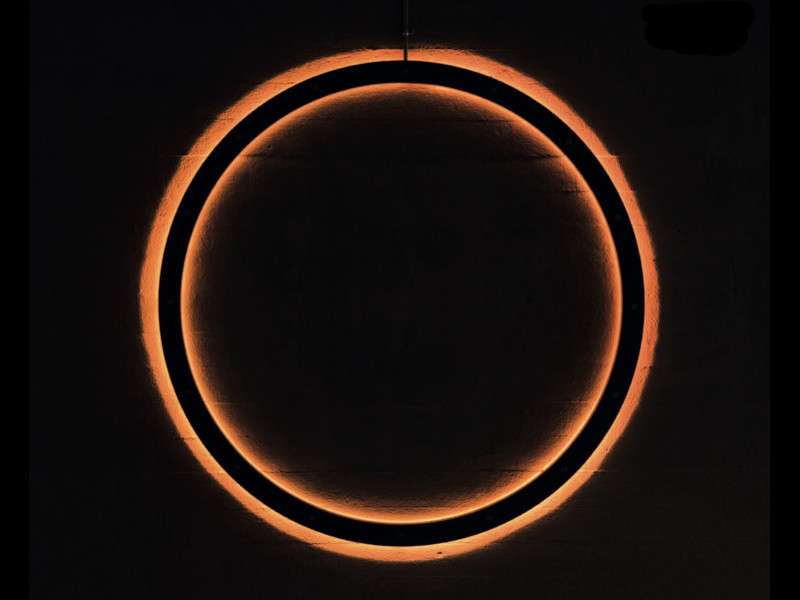 Paul Traynor of Light Bureau looks at three schemes with a strong social impact, and how lighting approached creatively can elevate the functional to a higher level

The continuum between lighting design and light art is a long one. At one end it concerns lighting that is highly pragmatic – light to see by, to find your way safely from point A to point B. At the other there is light that exists just to delight – it could serve no practical purpose whatsoever but to make our hearts glad. Public realm lighting exists on these dimensions and all of the ones between. Take one particular project we are doing on the island of Svalbard, Norway, which is well inside the Arctic Circle. For the Longyearbyen masterplan we have designed the column amenity lighting to dim down automatically in the event that a natural light show – the aurora borealis – occurs. It’s a spectacle that nothing we can create could compete with.

The following three projects all involve creativity but they also share a practical purpose. Two are located in Denmark and both concern cycling; it’s well known that the Danes like cycling more than most other nations (nine out of 10 Danes has a bicycle). Closer to home, the Optic Cloak is very visible – especially from London’s Blackwall Tunnel approach road.

What all three projects have in common is the positive effect that lighting has had on communities. These are not lighting installations posing as art; they are about how lighting approached creatively can elevate the functional to a higher level. They seek to improve the user’s perception and reinforce a sense of place and identity.

Cycling is a real popular form of transport in Denmark, and based on statistics provided by the Cycling Embassy of Denmark, 36% of all Danish adults commute by bicycle to work daily or at least once a week, and 45% of Danish children cycle to school. Therefore, providing good lighting to support these journeys is at least as crucial as lighting roadways.

The Cycle Superhighway project concerns a 21km route connecting urban centres in the Gladsaxe Municipality near Copenhagen. Known as the Farum route, there are 12 tunnels that have to be navigated by the cyclist, and at the time this project started they were doing little to promote either a feeling of safety or accessibility. A third issue the project wished to address was how to create a recognisable visual identity through means of light that would encourage more people to cycle.

Light Bureau’s Copenhagen office co-created the Tunnel 11 project with an urban planner and lighting design students from Aalborg University in Copenhagen (one of the lecturers on the lighting design master’s degree programme works in the Light Bureau Denmark office). The students carried out user surveys as part of their semester project for the selected tunnel. Users reported that they felt Tunnel 11 to be unsafe and that the transition between the outside in daylight and the relatively dark interior of the tunnel was hard to adjust to.

Three core values were identified as parameters for the tunnel: identity, flow and presence. Identity is achieved through the emblematic form of the illuminated ‘bicycle wheel’ – which we developed as a wall fixture – and its warming orange colour as determined through collaboration with the urban planner. The second – flow – comes from the dynamic effect of the concealed light that rotates in the same direction as the cyclist’s wheel. And presence is suggested through the rotation effect decelerating gradually, leaving a sense of activity for the next cyclist who enters the tunnel.

There are two forms of lighting in the tunnel – the dynamic wheel and soffit-mounted downlights. The latter are needed particularly during the daytime to balance the light levels on the inside with the outside – overcoming the transition issue. The fixtures selected emit warm white light, creating quite strong circular pools of light centrally – reinforcing the wheel motif. Being directional they reduce the spill light to the tunnel sides, so that the impact of the wheels is not diluted.

Control is automatic – a daylight sensor at the tunnel mouth adjusts the dimming of the amenity lighting while motion sensors detect the approach of cyclists and trigger the wheel’s light rotation. Different effects on the control system can be accessed by SMS.

Resilience is needed in outdoor public situations and that quality was amply demonstrated by the designers hitting the wheels and hanging off them physically. However, positively, there have been no instances of vandalism since completion and, based on the success of Tunnel 11 the remaining tunnels have had lighting installed. Because the tunnels are different structures, the concepts vary sometimes, so that instead of the wheel motif the spokes of a bicycle are interpreted as luminous lines on the side walls.

Around 30km from Copenhagen is the city of Roskilde on the island of Zealand. In 2003 the municipality bought the former concrete factory and gravel pit, Unicon, and since then it has developed into a unique and dynamic urban development called Musicon.

Because of its industrial heritage, there was already a legacy of old factory buildings, and these attracted curious and creative people to the district. There was no overarching masterplan – the potential was unlocked in steps in collaboration with the new residents. Temporary events and spaces helped to activate Musicon, and early settlers included skaters and artists, and a dance theatre was an early project in 2008. Roskilde is no newcomer to culture – since 1971 it has hosted an annual music festival, so it wouldn’t come as a surprise that the ambition of Musicon was a people-centric regeneration where citizens need to play an active part in shaping their community.

Alongside the repurposed industrial sites, new buildings are being erected – arguably the most recognisable is the Ragnarock museum designed by COBE/MVRDV, built for young people and featuring a huge cantilevered overhang to give shelter for concerts and events outdoors. There are already skate parks (one with a highly innovative drainage design), and as an initiative to encourage cycling and walking between Musicon and the train station, around 20 minutes from the neighbourhood, the municipality conceived a permanent intervention – one that would really come into its own after dark. The Musicon Path, a pump track, is a piece of urban landscape with a difference.

Central themes were play and learning. The track is undulating and the lighting concept was based on the flow of water. As water can exist in many different states – calm, agitated, flowing – so the pump track was designed to react to the user. Based on how fast the rider navigates the track, sensors in the lighting columns pick up the speed and create a coloured light trail; the faster the rider can go, the longer the trail becomes, so encouraging competition between riders and sustaining interest in the track. When the track is ‘resting’ the light projection reverts to white light, and after around 10 seconds the track is again ready for the next attempt.

In any public project safety obviously cannot be ignored at the expense of creativity so the concept was supported by two principles – or two layers. The first is architectural – ensuring that there is sufficient amenity and visibility. The second layer is the behavioural layer – the flowing wave, which is responsible for the playful interaction between user and track.

Light Bureau’s Copenhagen office was responsible for the project, working with public artist Simon Panduro. As with all successful interventions, the pump track is a strong, simple concept but complex to realise. There are 23 projector heads mounted on seven posts. The heads are finished red and fitted with honeycomb louvres to avoid glare to the users. The sensors are lidar – compact, fast and reliable laser devices – the technology that is being used in autonomous vehicles. Different scenarios are programmed – so for special events like the music festival the lighting can be turned a different colour by using SMS.

Vandalism is, unfortunately, a fact of life and Musicon has its own share of such problems. We always hope, as designers, that the gesture of improving a public situation will be rewarded by the users not wilfully damaging the lighting and so far this has proved true. Musicon is a young community and there are a lot of young people interacting outdoors together. The pump track has given them another destination in their neighbourhood and it’s a great example of a city being well connected to its inhabitants.

In 2014, quite out of the blue, we received a call from UK artist Conrad Shawcross’s studio asking if we would be interested in lighting a new sculpture he had been commissioned to build in London. I had experienced Conrad’s work before – at The Light Show at the Hayward Gallery in London in 2013. The piece on show was called Slow Arc Inside a Cube IV, and was evidence that Shawcross fully understood how to manipulate light and shadow – it was an unsettling work.

Overlooking the Blackwall Tunnel Approach and marking the gateway to the Greenwich Peninsula, the sculpture envelopes the future Low Carbon Energy Centre, designed by CF Møller, that will power the 15,000 new homes on the peninsula. With gas turbines come flues for exhaust gases, and the architect’s initial response was to design a narrow shroud to conceal them. The local authority rejected the proposal and a competition was launched to reimagine what could better conceal the 49m-tall flues.

Shawcross, the artist on the winning team, was adept in working with metal and he drew inspiration from two sources. First was the moiré effect – the interference patterns that occur when a permeable or perforated surface overlaps with another, usually similar pattern. The second inspiration was dazzle camouflage, a popular technique, used especially in World War I, of painting a warship in a bold way to confuse an enemy ship or submarine. The principle is that it’s hard to understand which part of the ship you’re looking at, and therefore which way the vessel is headed.

The latter effect is called hiding in plain sight. And that was the idea of the sculpture that became the Optic Cloak – a massive structure (50m tall, 20m wide and 3m deep) that was concealing something else, its surface shifting and changing appearance depending on the light and time of day. Nothing we had worked on before prepared us for a structure like this: perforated metal plates arranged in shards and an internal skeleton that was undefined. And the energy centre would be populated with more turbines as the development progressed – we couldn’t know how many flues, how wide, how much space between them or even what colour they would be. We eventually settled on two solutions, which would play to the geometry of the cloak and also the permeability. By varying light intensity on either inside face we could draw the eye through the cloak or effectively block the view.

Unusually for a sculpture it was constructed under a design-and-build contract as a building. There were no opportunities or budget for a mock-up so we had to validate our proposals by calculation models and small- scale tests. We did get to trial different aiming angles prior to completion, and the lighting internally does indeed alter the permeability of the structure.

But Shawcross didn’t want light to define the sculpture and we were in agreement with that. The objective for us was to help to create a night-time identity for it but in a way where the public would appreciate the form more than a light show.

After completion, we checked social media and the cloak really had gained great attention. In this case, it turned the negative image we have of industrial fumes coming from a power plant into a symbol of civic pride in Greenwich.