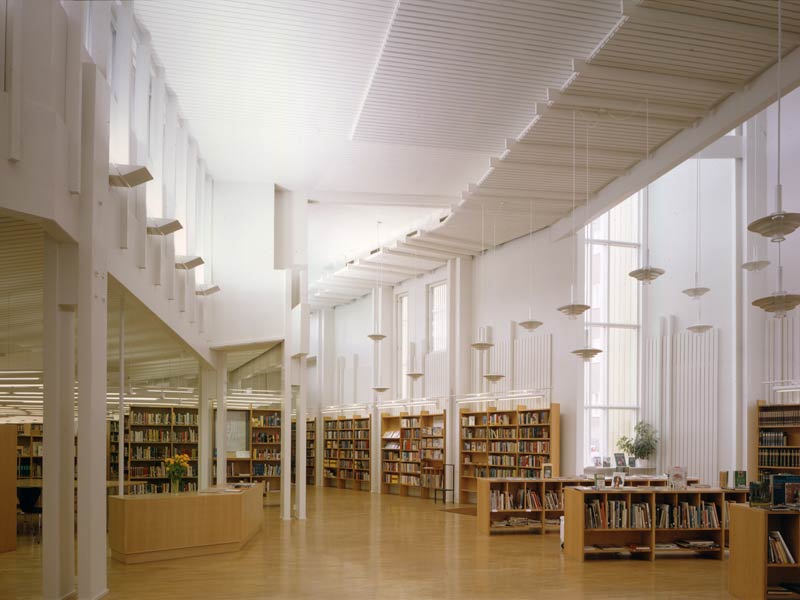 The introduction of artificial, especially electric, lighting has rather distracted and diverted us over many decades from the value of natural light. Concerns over glare and solar gain plus the economics of office development are just two factors that have militated against us fully exploiting a free and far superior source of illumination. However, the drive to use less energy and, more recently, the growing understanding of the profound links between daylight and how our bodies function, physically and mentally, have led to a growing momentum for the use of and access to natural light.

‘We must return to a condition where daylight becomes the primary source of illumination wherever possible, effectively turning the clock back 100 years or so in lighting design terms,’ believes Arfon Davies, director and UK lighting design leader at Arup.

This year the Daylight Award, established to support daylight research and daylight in architecture, ‘for the benefit of human health, wellbeing and the environment’, marks its 40th anniversary. The impressive aspect of the biennial award, as its mission statement suggests, is that it views and applauds natural light in its broadest sense. This year’s three laureates are perfect exemplars: an architect, a neuroscientist, and an architectural writer/photographer.


The Daylight Award 2020 For Architecture
Juha Leiviskä, Architect and designer Finnish architect Juha Leiviskä receives the award ‘for his works of architecture that demonstrate a unique ability to make daylight an integral element of his buildings’, say the judges. Russell Foster, a British professor of circadian neuroscience and instrumental in the discovery of the third photoreceptor in the eye, was honoured ‘for his clinical studies in humans addressing important questions regarding light’.

US architectural academic, writer and photographer Henry Plummer, receiving a special lifetime achievement award to celebrate the 40th anniversary, was honoured for ‘recording daylight phenomena in his brilliant photography and writing’.

‘While laureate Russell Foster studies the science behind the effect of light on human behaviour and physical and mental wellbeing, laureates Juha Leiviskä and Henry Plummer approach the effects and implications of daylight intuitively through architectural design, photographic expression and verbal mediation of these human responses,’ said the jury.

‘Whether elucidating the neural effects of light or invoking the poetic essence of light, the laureates of the 2020 Daylight Award demonstrate to us the power of natural light.’ The 84-year-old Juha Leiviskä is one of the most significant contemporary architects in Finland. Daylight is an integral element of his buildings, used in an exceptional way to define interiors and evoke atmosphere.

‘Daylight solutions in modern architecture are usually based on variations of zenithal light, or narrow roof or wall slits to guide light along the surfaces of the architectural space,’ said the judges. ‘Leiviskä’s light is an oblique light that both strikes vertical surfaces directly and is reflected to create experiences of layered light with a distinct sense of depth. His light does not only illuminate surfaces, it appears to originate and exist vibrantly in the architectural space itself.’

He first came to critical attention with Kouvola Town Hall, designed in collaboration with Bertel Saarnio in the late 1960s and still regarded as one of the most significant public buildings in Finland. He came to international attention with a number of refined religious buildings, notably with the completion of a new church and parish centre in Myyrmäki (1984), part of the city of Vantaa that lies just beyond Helsinki’s northern suburbs, and described by architect and author Professor Richard Weston as ‘one of the most exquisitely lit interiors of recent decades’.

Leiviskä’s churches are ‘masterfully articulated instruments of daylight’, commented the judges. His sources of inspiration include Bavarian baroque churches, and the De Stijl movement (exemplified by the painter Piet Mondrian and the architect Gerrit Rietveld). Leiviskä is also inspired by music (a possible career was as a concert pianist) and his architectural projects, observed the judges, ‘have a musical quality evocative of, notably, Mozart’.

While Leiviskä’s architecture echoes architectural and musical precedents, his treatment of light also reflects the natural light conditions in Nordic forests, ‘especially counterlight seen through foliage, and the ambience of birch trees with their white vertical rhythms’.

The Finnish architect is also known for his use of reflected colour, which makes it appear a constantly changing, pulsating phenomenon, said the judges. ‘The colours brighten and then fade, appear and disappear according to the intensity and direction of sunlight, like breathing. In his design of residential buildings, Leiviskä pays the same attention to the quality and intensity of daylight for the occupants’ visual comfort and wellbeing. He does this calmly, simply, and in a refined way without seeking effects.’

Leiviskä’s most prestigious projects include the extensive German Embassy near Helsinki, but according to Weston, his library at Vallila remains, arguably, his finest ‘secular’ project. ‘Externally, the building is modest in scale and almost recedes into its setting,’ says Weston. ‘Internally, however, the library is unexpectedly grand, its multiple spaces unified by a play of light every bit as masterly as that in Myyrmäki.’

Leiviskä continues to enrich the significant traditions of the Nordic masters of modern architecture,’ said the judges, using daylight ‘in a way that combines emotional stimulus, functionality, and a subtle yet thrilling presence of light as part of the spatial experience. In the current context of environmental values of architecture and the use of natural resources to create natural and sustainable comfort, the work of Leiviskä on daylight is particularly relevant today.’ Henry Plummer is an architectural academic who has specialised in researching daylight in architecture. An emeritus professor, he taught architectural history and design at the Center for Advanced Study, University of Illinois Urbana-Champaign. He gained his MArch degree from MIT, studied light art with artist, photographer, educator and art theorist György Kepes, and was an apprentice to the US photographer Minor White.

‘Through extensive critiques and photographic investigations, he provides a thoughtful and evocative assessment of countless buildings through history. His unique approach to revealing the transformative, metaphysical qualities of daylight is to combine his power of narrative analysis with his outstanding skill as an architectural photographer,’ commented the judges. ‘In this way, his extensive body of work has inspired generations of architects to reveal and celebrate the experiential aspects of daylight in architecture.’ Plummer has described the complementary roles of the written word and the photograph. ‘Words examine ideas and thoughts, observations and analysis concerning light, while images present the phenomena themselves,’ he says. ‘It is with this in mind that the photographs are intended not as textual illustrations, but rather to form their own mode of enquiry, one that seeks to carefully examine the metaphysical aspects of architecture whose significance lies, to a large extent, beyond the domain of words.’

He has published numerous books revealing the transformative power of daylight in architecture, including early contributions to the Japanese journal Architecture + Urbanism, such as The Poetics of Light (1987), Light in Japanese Architecture (1995), and Masters of Light (2003). The latter is an extensive catalogue of more than 50 20th-century architectural masterpieces, and provides the first comprehensive and compiled analysis of daylight in projects by architects ranging from Alvar Aalto to Frank Lloyd Wright. The Church of the Light in Ibaraki, Japan, by Tadao Ando

The judges said that Plummer was unique in having studied and photographed architectural light in varying cultural, climatic and geographic contexts. ‘In addition, he has succeeded in emphasising and mediating multisensory experiences – as exemplified in his recent book The Experience of Architecture (2016) – in his images and writings, especially the interplay of silence and light. Plummer’s studies capture the ephemeral, spiritual and metaphysical phenomenon of light for future generations.’

At first glance, an Oxford neuroscientist might appear not to have much relevance to the world of design, but in fact his research is of crucial importance to how we shape and light our environments in the future.

Professor Russell Foster is director of the Nuffield Laboratory of Ophthalmology, and head of the Sleep and Circadian Neuroscience Institute at Oxford University. The author of nearly 200 scientific publications and four popular science books, his research focus is in understanding how the circadian rhythm and the sleep-wake rhythm are generated and modulated.

His most significant scientific discovery was that, in addition to rods and cones, the eye contains a specialised cell, a non-visual light sensor that aligns the body clock and the sleep-wake rhythm to the day-night cycle. ‘This singular discovery has changed fundamental tenets of knowledge regarding the effects of light on biological systems and human physiology,’ said the judges. ‘In identifying the neural substrate for a non-visual light pathway to the brain, he has demonstrated the powerful and wide-reaching impact of light on human health.’

On average, we spend 90% of our lives inside buildings, and the built environment is a primary moderator of the light to which we are exposed, continued the judges. ‘The architectural community acknowledges Professor Foster’s work that identifies the short and long-term health consequences of light, and addresses when and how light ingress should be encouraged, and conversely, when it should be reduced and blacked out.’

The Daylight Award was established in 1980 by the philanthropic foundations Villum Fonden, Velux Fonden and Velux Stiftung, which were set up by Villum Kann Rasmussen, founder of Danish window company Velux and other firms in the VKR Group. It is given in two categories: The Daylight Award for Research and The Daylight Award for Architecture. Previous laureates have included James Carpenter, Steven Holl, Peter Zumthor and Jorn Utzon.

The Daylight Award for Research Given to individuals or smaller groups of scientists who have distinguished themselves as outstanding contributors to internationally recognised daylight research. It acknowledges highly original and influential advances in the areas of natural science, human science or social science, with special emphasis on the effects of daylight on human health, wellbeing and performance.

The Daylight Award for Architecture Awarded to one or more architects or other professionals who have distinguished themselves by realising architecture or creating urban environments that showcase unique use of daylight. Special emphasis is put on architecture that considers the overall quality of life, its impact on human health, wellbeing and performance, and its value to society.
thedaylightaward.com