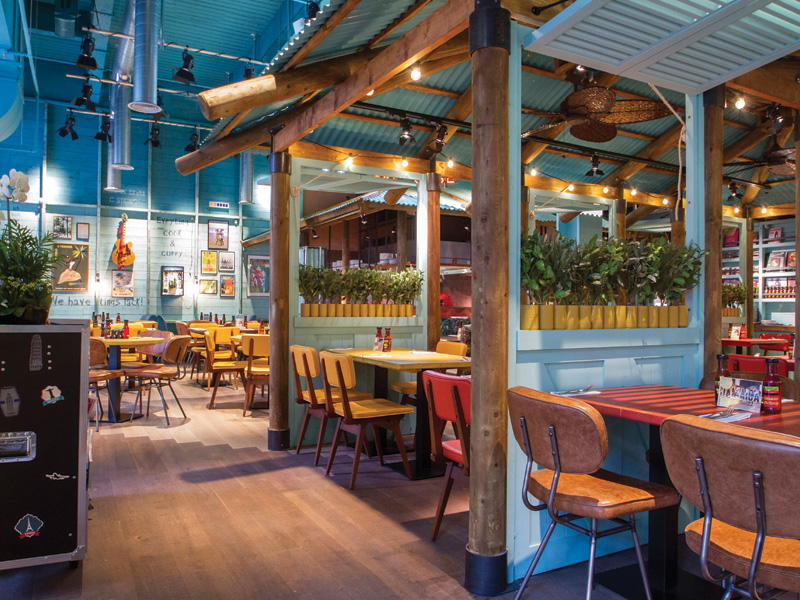 Singer, sauce maker and Dragon’s Den alumni Levi Roots needed some help when he decided to bring a taste of the Caribbean to London, so he turned to B3 to help create his first Smokehouse restaurant.

When the reggae singer-turned-sauce maestro Levi Roots was looking for designers to realise his vision of Levi’s Caribbean Smokehouse he turned to hospitality design specialist B3.

Initially taken on to deliver the restaurant environment for the new Caribbean concept, B3 ended up creating the brand identity as well. Levi Roots teamed up with Eren Ali, former owner of the Las Iguanas chain, for the new restaurant venture, and earmarked the Westfield Stratford shopping centre in East London as the site for the first branch. The two went to the Caribbean on a research trip, returning with photographs and ideas to inform B3’s design concept for the restaurant. ‘I travelled to Jamaica a few times in the early stages of the design. It was really important to me to get into the right mindset so we could capture the spirit of the Caribbean,’ says Roots. ‘We took lots of photographs on these trips and referred to them constantly during the design process.

‘I wanted the space to resemble a Jamaican beach hut and replicate the fun and relaxed atmosphere that goes with that...I’m really pleased with the results. The look from the outside makes you feel as though you’re about to enter somewhere really special.’ Extractor pipes are placed high up, fading into the background and not competing with the restaurant’s bright colours

B3 took inspiration from the roadside shacks and entrepreneurial attitude found in the Caribbean region as well as the vibrant colours and upbeat atmosphere for the Smokehouse, which aims to convey the flavours and atmosphere of Caribbean food and culture in an open and welcoming manner.

‘We’re trying to create a bit of illusion that you’re in the Caribbean without being themey,’ says B3 design director Mark Bithrey.

Crucially, the concept was also infused with Roots’s personality – not just the Caribbean Levi of his childhood but the Brixton Levi after he moved to England. The result incorporates a retro vibe of music and Caribbean-related bric-a-brac, including albums from Roots’ personal record collection and other artefacts. ‘We wanted to make it as much like Levi as possible, so there is the underlying story of his heritage and down-to earth personality,’ says Bithrey.

Previously occupied by two shops, the Westfield unit offered a wide, double shop front and space inside for 134 diners. One of the most challenging elements for B3 was the servicing, achieved with huge extract pipes set high up that fade into the background, in contrast with the bright colours of the restaurant interior. There are three focal points to the restaurant. At the back is the cooking pit hut where the meat is rubbed and cooked on a wood-burning grill in keeping with Caribbean cooking style. The pit is constructed from a cut-down shipping container with a corrugated tin roof and timber frame.

A counter arranged around the pit offers ringside seats for the cooking, and can be utilised for cooking demonstration sessions.

‘The jerk pit was the hardest part of the design. It was vital to me that people would be able to see and experience the theatre of the smoking process,’ says Roots. A second, open-sided, timber-framed hut occupies the centre of the restaurant. As well as providing a space suitable for tables for two, this area can also be used as a separate dining space by closing down some of the bottom-up opening shutters to create a more secluded area.

The third focal point is the row of raised banquette seating along one wall, which can be easily relocated to allow the area to be used as a stage for occasional live music from Roots himself or for open-mic sessions. This gives flexibility of use without losing precious covers – indeed the banquettes have turned out to be the most popular seats in the restaurant.

Drawing clear inspiration from the upholstered seats of cars and gigging vans, they are made in the same aqua colour suggestive of sea and sky also used on the timber-clad interior walls of the restaurant.

Elsewhere, bespoke furniture, including seating with Matthew Williamson’s tropical print fabric, captures not only the colours but also the handcrafted aesthetic popular in the Caribbean. There’s even a hand-made cart similar to those used by roadside sellers. The industrial character is carried through with steel mesh and exposed steelwork and also at the mezzanine level. Here storage boxes are visibly stacked, covered in bold, hand-painted graphics and handily hiding servicing. For the tiled floor, B3 specified a bespoke citrus pattern to add to the highly colourful environment.

As well as plentiful use of artefacts to dress the space, B3 engaged a signwriter to paint graphics on the walls, including phrases in Jamaican patois. The whole ensemble is topped off by the illuminated restaurant logo, displayed on metal structures above the cooking pit and in the window.

Roots intends to roll the Smokehouse concept out to other locations and expects to be looking at a second site early next year.