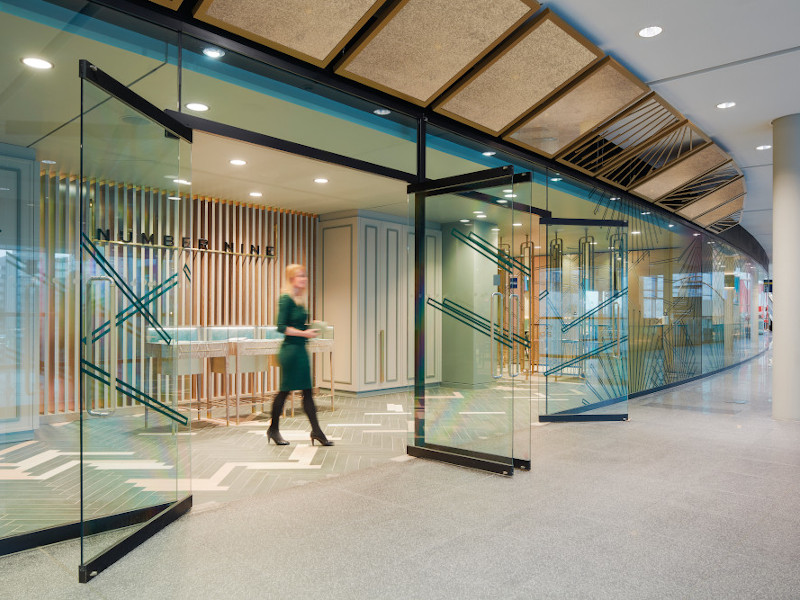 The hospitality facilities at Wembley Stadium have been undergoing a transformation, with the latest venue targeting a cooler crowd

The Number Nine Lounge at Wembley Stadium is the latest project by KSS Architects in the refurbishment and redesign of the location’s Club Wembley hospitality offering. Membership for this area, named after the number nine jersey and the iconic footballers to have worn it for England, is priced from £6,000 including VAT per year, and is aimed at ‘those who want to play with flair’, says the venue’s website. Number Nine is situated in the North Stand, in a location that takes a little finding, explains Debbie Power, associate director at KSS Architects. KSS chose to take advantage of this by theming the design around ‘an adventure’, making it an exotic and unique destination in its own right.

That led to tropical-influenced interiors: the colour palette is pinks and aquas with liberal use of brass, while the tiles of the herringbone flooring are laid out to depict palm leaves. Standout features include a large central bar with striking aqua blue tiles set off by brass detailing, and the entrance to the space. Power explains that KSS likes to create ‘entrance portals’, and the entrance to Number Nine features a suspended ceiling of antique mirror panels and a screen separating the reception area from the adventure that lies behind.

All loose furniture was supplied, delivered and installed by independent furniture dealer Rainbow, which has access to a wide range of furniture and fabric suppliers. The materials it worked with – led by KSS’s overall design for the project – are luxurious while also being hardwearing, and met the budget, the timeline, and strict fire regulations. Rainbow’s process included thorough testing and sampling, as the company’s Seyhan Ahmet explains: ‘On projects where the architect has a vision [including] the type of materials they want – if they haven’t been tested on this kind of products then they need this testing… for example, for a curvy shape, the fabric might not be stretchy enough.’ One of the key furnishing fabrics, described by Ahmet as ‘a really good find’, was a material from Perennials Fabrics, a Dallas-based company. A key furnishing fabric was a material from Perennials Fabrics called Plushy, which was velvet-like but extremely durable.

Named Plushy, it appears like velvet yet is ‘bombproof’. As Ahmet says: ‘I’d never seen anything so durable – you can practically use anything under the kitchen sink to clean it.’

Rainbow was also responsible for the tables across the site, including high bench tables, booth tables, as well as dining tables with distinctive marble tops. These marble table tops used combinations of white and green marbles, set within powdered steel frames.

Ahmet explains that it was a tricky process creating the table tops; they used ‘five pieces of marble that had to be bonded together and sit flat within the frame, [and] had to look like one piece’. After KSS and Rainbow designed the tables they sent the designs to manufacturer Wycombe 21, who would send back technical drawings and samples of the frame – and even full table tops, for the client to see. Ahmet sees the challenges of these ambitious furniture designs as positive. Rainbow was keen to push the creativity of the project, and Ahmet explains that the company’s approach was ‘to be as creative as possible’ with the products they selected and the bespoke designs they developed – he credits this for Rainbow being awarded the job.

Catering supplier Delaware North helped to ensure the right ambience for the space. The food offer is a buffet, which Power suggests is the direction sports hospitality is taking. Despite their solid appearance, both the bar and the catering facilities are modular and can easily be broken down and moved out of the room if necessary, ensuring the space has the high levels of flexibility desired.

As KSS also has a branding team, its remit extends to the details of restaurant menus, buffet trolleys and tote bags. Power comments that it is a pleasure to be able to work seamlessly like this on all those touch points.

The design has created a distinct space for Club Wembley, and if it seems a little (too) unusual for a football offering – Power says some members of the Football Association, which owns Wembley Stadium, were appalled – that is partly the point: it’s meant to be different to traditional football hospitality. Power says it is intended to appeal to a demographic that is younger but still has money to spend and desires the luxury experience, is cool and flashy, and ‘gets invited to the best parties’. After several years of KSS working with Club Wembley across a range of its hospitality spaces, the client is pleased with the outcome of this latest venue. Two further dining offers, Arc and Venue, are due to open shortly.