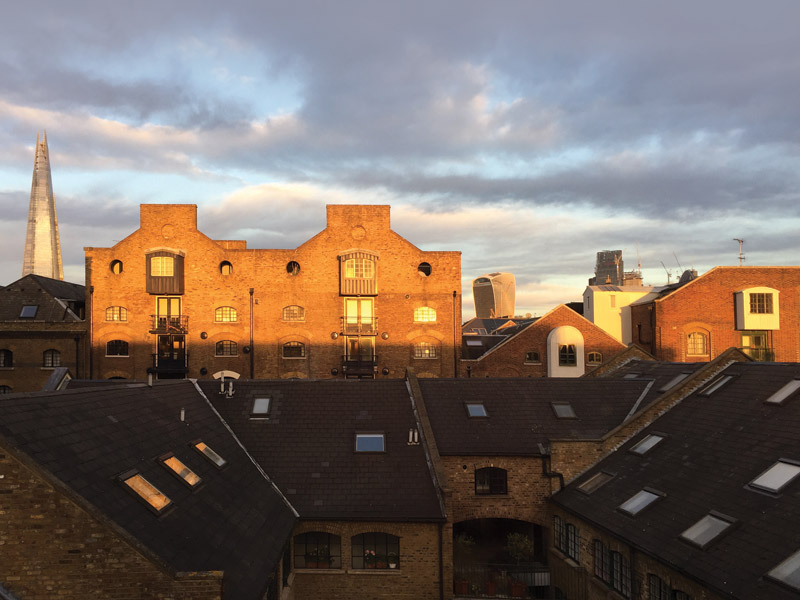 For our flooring focus, Rebecca Lewis-Chapman of The IAD Company explains how her team renovated a historic London Penthouse

The Loft is a luxury penthouse apartment in the centre of London. Perched alongside Tower Bridge on the Thames, it comes with stunning views of the Shard, the Gherkin, and several other iconic London skyscrapers.

The property is located in the St Saviour’s Dock conservation area, on the 4th and 5th floors of a converted biscuit factory originally built in the early 1900s. It began deteriorating after becoming a residential unit in the 1980s and was in desperate need of modernisation and TLC, while the entire layout of the original apartment was poorly conceived and did nothing to take advantage of the building’s immense character and enviable location.

The current owner is in the entertainment industry and regularly does voice and piano exercises, but there are offices directly beneath the apartment and there is only so much operatic singing that can be endured during a working day, no matter how good it is! The sound insulation between the apartment and the floor below was not sufficient to prevent the sound from travelling between the areas. To address the issue, the team completely stripped the apartment’s ground floor level, which included ripping up the floor and removing the first 50cm of all the separating walls, enabling the sound insulation to be installed in one solid piece.

It was decided quite early on that the new flooring would need to be solid oak, as this would be hard-wearing and give the occupier the opportunity to re-sand and re-varnish at a later date if required. Once we had settled on oak, it was delivered to site straight away, to allow it as much time as possible to acclimatise to the property and its temperature.

The next challenge came when we had to get the timber into the apartment, as the only access internally was via a staircase or a small service lift, which we did not have permission to use for construction purposes. Therefore, a spider crane was used to hoist the timber up through the windows of The Loft. The design team couldn’t find a stain that provided the required finish. To get the colour just right, they rubbed stain into the timber and then wiped it back off again before it could be fully absorbed, and then added a top coat of satin varnish for a soft sheen

We also replaced all of the old and outdated electrics and plumbing, and because the sound insulation was to be a sealed system all of the plumbing used continuous run pipework.

The oak flooring was laid straight from front to back through the entire 180m² apartment. As each section was completed it was covered over using ply boards to protect the timber from any marks or spills while the rest of the project was completed. When the ply covers were removed, the team began the process of testing different staining products and methods. The goal was to achieve a light and neutral finish that complemented the existing structural beams, which varied in tone and density in different areas.

After much trial and error, we couldn’t find a stain that gave us the finish we were looking for, and so to get the colour just right we rubbed stain into the timber and wiped it off again before it could be fully absorbed. After this coat had dried out, we finished the process by adding a top coat of satin varnish to protect the timber and give the flooring a soft sheen. This was a really important part of the process as it kept the floor slightly reflective and allowed the timber to reflect the natural light that came in to the space. Our client was blown away by the colour, and the finish looks beautiful in the converted warehouse setting.

The decoration and soft furnishings were chosen to highlight the character of the building and allow the eye to focus on the structure’s details. For example, rather than using a bright paint scheme for the newly plastered walls a neutral colour was used throughout, which allowed the historic brickwork and interesting window shapes to stand out. We used simple designs and tones for the window dressings, and the light fixtures were either understated downlighters or very simple concrete fittings that linked back to the industrial history of the building.

As well as completely redesigning the internal layout of the property we also converted a part of the apartment, which involved removing the entire roof and raising it up by half a meter. After the roof had been lifted, we constructed an extension out onto the terrace to take advantage of the iconic views on display from that part of the building.

This was a challenging, but very rewarding, project and it is always a pleasure to work on historic properties, with all the character that comes with the age. Our goal was to showcase the history and fabric of the building, while bringing its functionality up to date and making it suitable for modern-day city living.