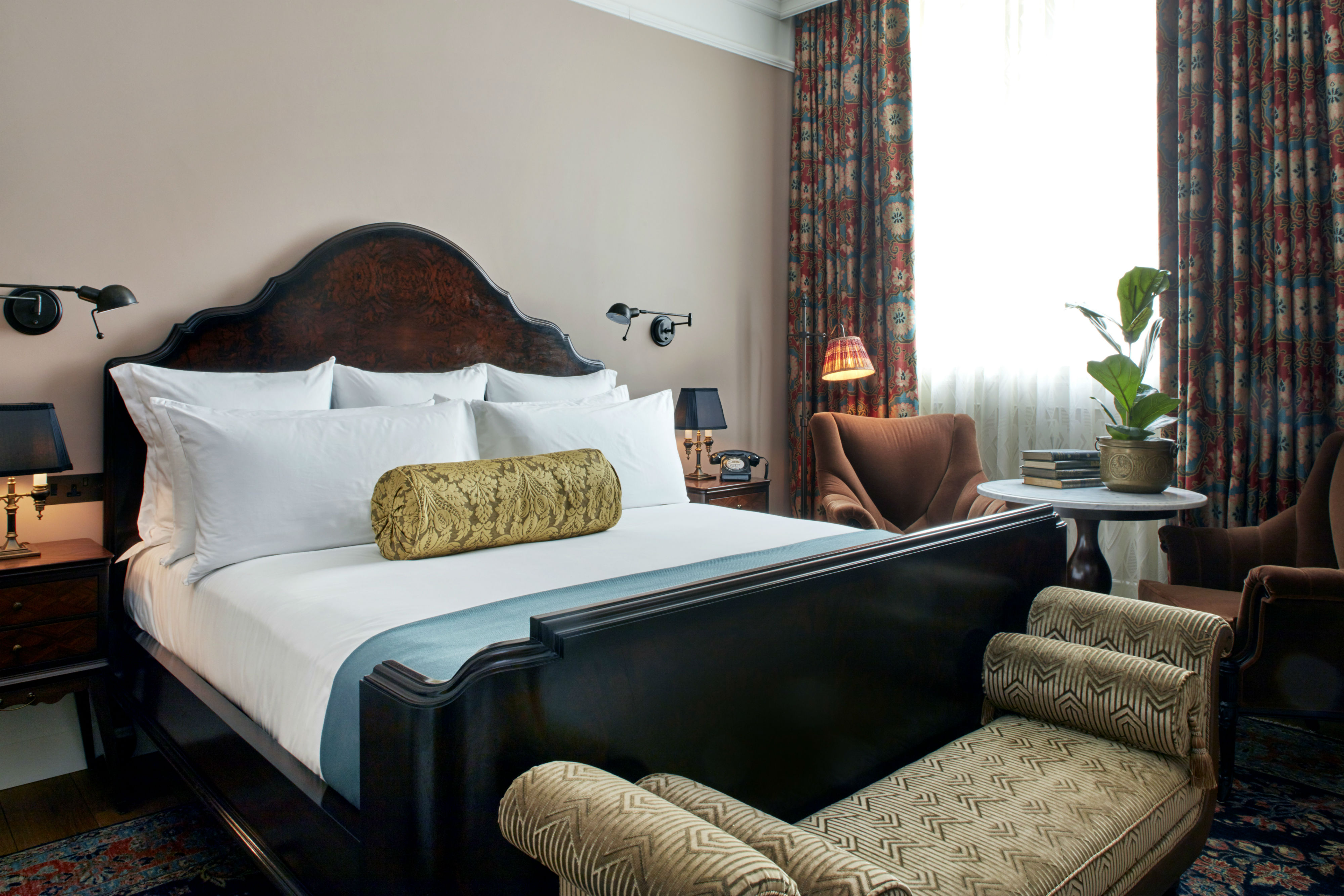 From the ‘first night effect’ to gadgets and apps, a roundtable held by Nulty tackled the ways design can be used to help hotel guests sleep better.

In late May, whilst the sun was shining on London and Clerkenwell Design Week was in full swing, a very special meeting of minds took place in the Zetter Townhouse boutique hotel. Tucked away into the Georgian townhouse’s private dining room, leading lighting design consultancy Nulty hosted a unique roundtable event.

Inviting an exciting range of experts from the hospitality design industry to offer their thoughts, Nulty were hoping to discuss an intriguing theme: the often intangible ‘good night’s sleep’ — how to achieve it, and what sleep means in the context of hospitality design. Conversation began to flow over food and drink, with guests surrounded by antiques and delightful oddities. Once the first order of business was taken care of – a round of G&Ts for all – the experts settled in to debate.

So why were lighting design experts Nulty so keen to discuss sleep? As Nulty’s director Emilio Hernandez explained to the table at large, the company is “working on a manifesto for sleep”. Having researched the elusive topic, the team at Nulty had decided it was time to see where sleep lived in the minds of other designers. As Hernandez continued, “[We] want to get some discussion going [so that] hopefully… we’ll begin to understand where [sleep] sits on your list of priorities”.

One of the most complicated topics emerged early on: what defines a good night’s sleep? How do we achieve it? Associate director at Dexter Moren, Lindsay Bean-Pearce, believed it came down to what is inside guest rooms.  “We’ve found we’re doing a lot fewer guest rooms with desks in them, and doing more of a kind of flexible working zone,” she explained. “Seeing your desk means you’re still attached to your work and your stress load.”

Tom Hupe, director of hospitality at Perkins + Will, revealed one of the major challenges in hospitality design: the ‘First Night effect’. “You’re in a heightened state of awareness anyway because you’re in a new environment,” he said. “Overcoming the ‘First Night effect’ is one of the challenges we have to look into when designing hotel rooms… It’s finding clever ways of [hiding] things [that make] you react.” Speaking of reactions, talk turned to one of our biggest bedroom distractions – technology – and how much choice hotels give their guests within the guest rooms. David Mason, a project director at Scott Brownrigg, mentioned that hotels are about “customer choice. You generally pick a hotel room based on what the amenities might offer, and also its location to where you need to be.” However, he also raised an interesting counterpoint: “Giving a customer too much choice, as well, is an absolute nightmare”.

Bean-Pearce reckoned that omitting technology from a guest room would need “re-coaching an entire mind-set… if you took away technology [now], then everyone would feel like their right arm had been cut off.” However, Hupe argued that in the future, “a brand will appear where you can’t spend long in your room anyway. It will encourage people to do their living and working elsewhere; and then, if you do remove as much technology - or conspicuous technology - from the room as possible, you can make the room into this perfect sleep experience.”

Seconding this notion was Oli Morgan, a founding director at expert technology consultancy, Blend. He added that there might be scope for designing “a management system to provide both experiences. We’ve this on the sort of high-end, bespoke hotels, where the switch plates are very traditional, but behind it sits a complicated system.”

With so many design experts sat around the table, discussion naturally shifted to how they themselves would consider a user’s overall sleep experience, when designing for hospitality projects. Is sleep at the forefront of the design process? Bean-Pearce explained that for her, it is. “It’s at the forefront, I think,” she said. “You have to do that research on what you’re putting into the hotel, and who your guest is going to be.”

However, Mason and Hupe agreed that it was dependent on who the client was. “Whoever the hotel is, they’ll have a set parameter of what they want in the rooms,” suggested Mason. “I think we design to a brief and every brand has its own USP – some of them do say one of their core values is about sleep,” Hupe added, continuing, “[but] when you end up designing for a brand [where sleep is not a core value]… sleep is [a] very, very low [concern] – it’s not a selling point.”

In response, Tom Bishop – a senior project manager at Future54 – made the point that “it’s not until you build the mock-up room and test it that you fully appreciate what it would be like to sleep in there.” The statement gave the roundtable pause; after all, it is certainly true - but if brands are still not considering sleep a concern, where does this leave the future of the hospitality industry? Should developers and designers put more focus on creating a ‘good night’s sleep’ in guest rooms? After all, with high-tech apps and gadgets, sleep is a growing business.

Used to providing specialist hospitality advice, Hupe suggested that this growing business could almost create “two layers” to guest room design. The first, he said, would be to “simplify [the room] and create a space that’s easier to sleep in. On a more futuristic layer, you bring in sleep-enhancing technology and that is where it has to be part of the core selling point – creating a hotel that is specifically for the sleep experience.” Mason agreed: “You’re going there for the lifestyle option. It’s almost experiential travel, you’re paying for the experience and you know what you’re signing up for.” But it was the business development director of TRILUX, Helen Loomes – who also happens to be extremely interested in how bodies react to light – who called attention to something that had previously been overlooked. “We have to be really careful about isolating [sleep],” she warned. “It’s the whole 24-hour cycle that’s important. I think we, in this discussion, are ignoring what’s going on in the daytime – and you can’t isolate it. It’s not a single symptom, it’s part of a whole.”

Conversation progressed, ebbing and flowing as the creative minds around the large oak table did what they do best: offered suggestions and ideas on how to find a solution, the same way they might adapt to a particularly complicated brief. However, this time the challenge came from finding ways to improve our sleep quality in hotels, and how to help designers move past obstacles that could get in the way of this goal.

One suggestion that stood out was from Loomes. “What we really need,” she said, “is a sleep hotel standard – like we’ve got the WELL building standard.” Bean-Pearce agreed: “That could be part of their star rating,” she posited. “If you don’t get a good night’s sleep, you lose stars.” But, over the general murmur of accord, the idea brought its own queries – after all, getting a good night’s sleep is no easy puzzle to solve.

By creating a ‘sleep standard’, could we then create a universally sleep-aiding guest room? Tom Hupe thought not. “There are so many different sectors that are facing the same dilemma – a move away from demographics to psychographics. So, you no longer group people; you have to treat them as individuals. The best thing you can do is create an environment where they can adapt it to suit their own requirements; so that you can be you, wherever you go. Otherwise you just end up generalising and making nobody happy.”

From corridors to creating sleep pods, designing for non-staying guests to those who were checking in after a long-haul flight, several angles were covered in the quest to understand how sleep can fit into hospitality design. Suggestions seemed to lead to more questions; personal horror stories were shared, as were insights into sleep gadgets and apps. As conversation wrapped, we might not have been any closer to finding an answer to our questions – but some of the best minds in design had certainly started turning.

Feature image: The Ned, with lighting design by Nulty