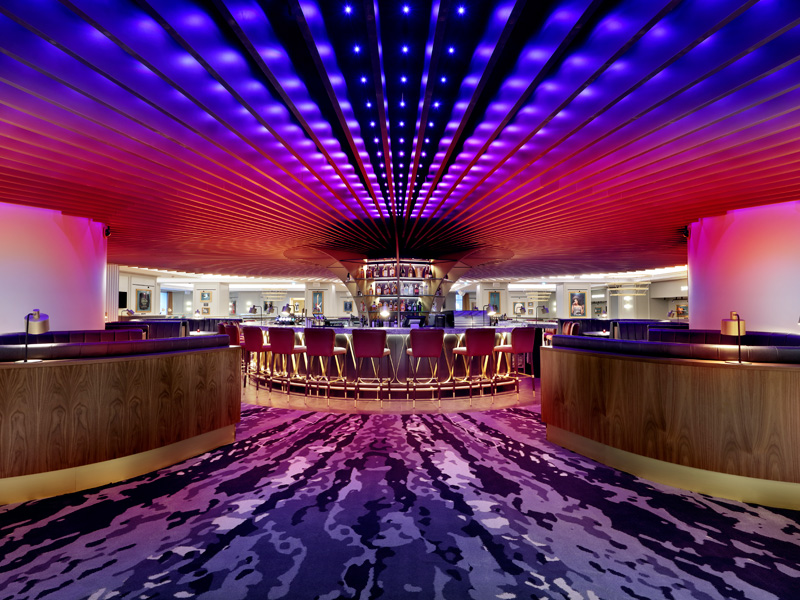 Architectural practice Scott Brownrigg faced some challenging acoustics in renovating the site for the Hard Rock Hotel, situated by London’s Marble Arch. The hotel doubles as a live music venue, so setting out the space to meet the needs of all users meant creative solutions were needed.

The brief was to renovate the public areas of the hotel, which included opening out the entire ground floor to create a welcoming space for arriving guests. The lobby, reception, GMT lobby bar, cocktail bar, Hard Rock Café, shop and lounge were all part of this. The challenge of opening up the space is that while removing walls suits certain aesthetic sensibilities, it also removes a room’s acoustic barriers, resulting in noise that can reverberate around the now cavernous area.

The question posed to the architects was how to provide a lively buzz for guests without the background noise becoming cacophonous? Getting the acoustic balance right is crucial in a building that holds both live bands and sleeping guests. Scott Brownrigg has worked with Oscar Acoustics on previous projects so knew its products and what would work in this situation.

A mixture of Oscar’s SonaSpray FC and SonaSpray FCX was specified throughout the bar and cafe areas, providing a decorative solution. The spray absorbs excessive noise, creating a pleasant ambience by giving clarity to speech and music, transforming what would otherwise have been an incessant din.

The seamless finish also made sure the acoustic treatment would not intrude on the overall design, and instead blended into the background, as, for example, in the GMT bar, which, in line with Hard Rock’s signature style, used the idea of a 1970s record player as inspiration, where the vinyl drops into place after being held aloft. David Mason, director at Scott Brownrigg, says: ‘Our experience over the years teaches us that architecture and interior design are so much more than just looks. We consider every factor with each project we work on, and acoustics is no exception.’

Ben Hancock, MD at Oscar Acoustics, adds: ‘This was such a wonderful opportunity to work with a world-famous brand on a brilliantly innovative and creative project. It’s always great to see a practice taking acoustics into account right from the start. Too often design is entirely focused on aesthetics, with noise taking a back seat. Thankfully, this was not the case and Scott Brownrigg has skilfully designed an acoustically comfortable space perfect for live music, retaining its atmospheric buzz.’ Housed in the former Camden Town Hall Annexe overlooking London’s King’s Cross, the 266-room Standard Hotel for Standard International was developed in partnership with Crosstree Real Estate Partners. Lead consultant was Orms, responsible for the exterior architecture/shell and core, and it worked alongside interior designer Shawn Hausman Design and interior architect Archer Humphryes on behalf of Crosstree and Standard.

A former theatre in the 1920s, Camden Town Hall Annexe was redesigned in the brutalist style in 1974 by Camden council’s in-house architects, as an annexe to the adjacent neo-Palladian Camden Town Hall, to provide offices and meeting rooms for the council’s workforce.

Orms began the conversion to a contemporary boutique hotel by retaining and cleaning the original brutalist concrete frame. The original tinted windows – in their distinct, rounded, rectangular frames – were then replaced with clear glass, and on the building corners, rounded panes with high-grade acoustic specification were inserted to combat noise from the busy roads below.

The facade’s existing precast concrete panels formed an integral part of the building’s structure and so could not be removed or altered without significant structural remodelling, and separating the annexe from the neoclassical town hall was necessary to convert the former council offices into a shell and core suitable for premium hospitality facilities.

To do this Orms had to remove the stair core and the concrete plant enclosure at roof level that joined the annexe and town hall together and allowed access, but blocked important views through Tonbridge Walk to St Pancras and beyond. This allowed the sculptural mass of the building to be expressed as a stand-alone building for the first time. However, removing the core also meant that the building’s stability was partly reduced, and so the architects added a new internal goods lift core and a shear wall to re-stabilise the building.

John McRae, director at Orms, says: ‘Remodelling existing buildings requires extensive research and analysis to understand the site, its context and history. The research has to be forensic in order to establish [both] the parameters of the existing structure and construction and [the] rules that will inform and guide the proposed design. Refurbishment and remodelling is not for the faint-hearted and requires stamina and energy.’

Adding three new-build storeys to the existing structure was a key component of Orms’ brief, and to accommodate the additional weight of the three new floors, Orms collaborated with structural engineers Heyne Tillett Steel to add new steel columns to the existing structure. These were threaded like needles down through the existing waffle slabs to the first floor transfer slab and concrete columns below. The columns needed to be carefully aligned with the waffles on each floor and be incorporated into the build-up of the new dividing walls between bedrooms.

‘Upgrading the envelope, integrating new mechanical and electrical services, and changing the fire strategy to meet current standards can prove challenging,’ says McRae. ‘However, the capturing of embodied carbon provides a great opportunity to target net zero carbon and make the most of our existing building stock.’

‘There does seem to be an increasing appetite for retaining buildings now that the climate emergency has come to the fore. The choice of building is often aligned with the hotel brand and ethos, and with new buildings it is more difficult to capture that character immediately as it can take time to mature, and in the case of Camden Town Hall Annexe, be accepted.’