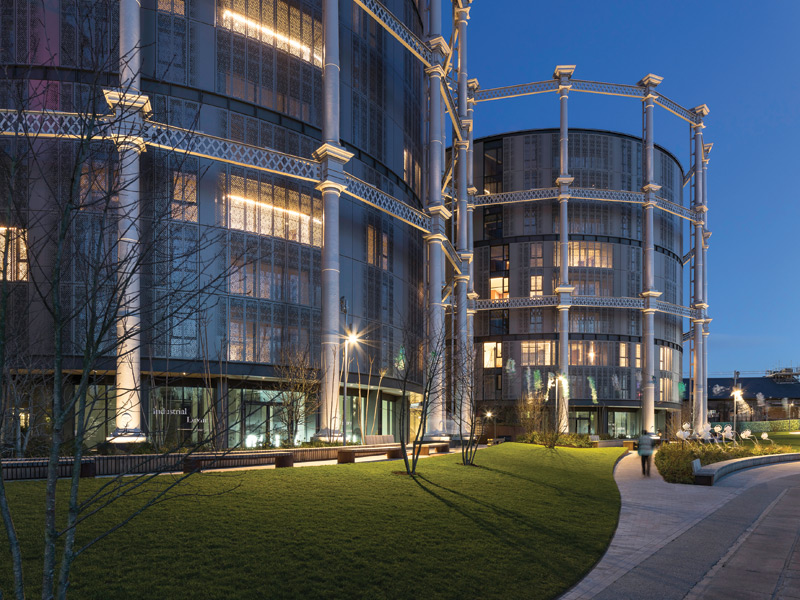 A unique trio of Victorian iron frames in which gas tanks once rose and fell, now host another unique structure — a trio of cylindrical apartment blocks. Referencing the industrial heritage, they are the latest additions to the trending, creative quarter of King’s Cross, London

Beneath the towering, skeletal structure of a remarkable conjoined triplet of gas holders at St Pancras Gasworks on Battle Bridge Road behind King’s Cross, London, a gang robs an armoured vehicle. The heist goes like clockwork and the gang, posing as a string quartet, hole up with the loot in a nearby house, where they plot to kill the landlady. All this happened in the 1955 film The Ladykillers. Those wrought-iron circular structures, designed by John Clark and completed in 1880, were masterpieces of Victorian craft, with capitals on their columns and emblems mounted on their horizontal lattice beams. They became Grade II listed. But then they found themselves in the way of plans for the expansion of St Pancras Station for the Channel Tunnel railway. The gas holders were dismantled and shipped off, and Battle Bridge Road has ceased to exist.

But it’s alright now, in fact it’s a gas — or more precisely, Gasholders London, a 23,950 sq m residential complex of 145 flats, all neatly contained within the listed structure. The gas holder frames, numbered 10, 11 and 12, were painstakingly restored by Shepley Engineers in Sheffield, and re-erected just north of where they stood before, beside the Regent’s Canal, but on the other side of it. Now, new WilkinsonEyre-designed cylindrical volumes, engineered by Arup, fit snugly within.

They are the latest addition to the enlightened urbanism of developer Argent’s vibrant 27ha King’s Cross estate in the hinterland of the station. It already includes a host of stand-out buildings, including the reborn Granary House, now home to Central St Martins, and there’s a lot more in the pipeline, such as Heatherwick Studio's retail repurposing of the Coal Drops (previously Bagley’s Warehouse), which is adjacent to the Gasholders, and the new 330m-long Google HQ by Heatherwick and Bjarke Ingels’ practice BIG, which has started construction nearby. WilkinsonEyre won the Gasholders design competition in 2002. ‘How do you turn the industrial aesthetic into a building?’, founding partner Chris Wilkinson asked himself. The answer lay in the elegance of Clark’s original design. Each of the three gas holder frames, which have different diameters from almost 45m to just over 30m, share perimeter columns with the other two, as if they were locked together like frozen clockwork wheels. Their rhythms and the way they touch suggested an approach to Wilkinson: ‘We view it like a watchmaker would a beautiful timepiece,’ he says.

That aesthetic informs key elements of the architectonics of Gasholders London. Wilkinson imagined ‘watchlike plans’ in which the floor plates were divided into slices like a pie, inspired by the segments of a clockface defining minutes and hours. Their divisions had to take into account the Victorian columns to preserve views between them from the apartments, which range from one- to three-bedroom flats as well as penthouse duplexes. They radiate out from a central axial atrium in each gas holder frame. ‘Working with circular geometry has resulted in really beautiful ideas,’ says Wilkinson. The circles of floors in each of the three volumes have a bite taken out from them, an arc segment like the Moon may make in the Sun’s disk during a partial eclipse. These arcs join together to create a fourth circle 25m across, a central void between the three volumes, and in which the three old ironwork frames meet. Each floor has a circular balcony passage around this central, shared atrium, looking down on a contemporary segmented courtyard of dark stone and water.

The internal atria at the heart of each gas holder are also circular, and surrounded by balcony walkways, from which the residences are accessed, but they are narrower and have no Victorian ironwork crossing them. They each rise to a skylight.

In diameter, they range from 6.2m in Gasholder 12, the smallest of the three and containing the entrance lobby, to 13.8m in Gasholder 11, the largest one. Their elegant spatial form and white aesthetic has a touch of Frank Lloyd Wright’s New York Guggenheim (although without a continuous spiral balcony passage), or the dramatic tubular atria found in some skyscraper hotels. Looking down into the internal atrium of one of the Gasholders. Image Credit: Peter Landers

Highly visible contemporary volumes could have easily distracted visual attention from the heritage structures surrounding them, and Wilkinson reports that Heritage England had concerns that different windows and inset exterior balconies ‘could become a bit of a hodgepodge’. His response was to design bespoke automated floor-to-ceiling steel shutters for where the flats look out, with brass accents that appear as they fold. Even when closed for privacy, they allow light in with their fields of perforations. Along with the grey-finish metal rainscreen cladding that forms the solid part of the buildings’ skin, there is a powerful evocation of the gas tanks that were housed by Clark’s frames, and the shuttering details give an echo of intricate Victorian metalwork.

Because the residences are wedges, when you enter one ‘you walk into a space that’s opening out’, Wilkinson notes. Their interior architecture is by Jonathan Tuckey Design, with living areas that can radiate from the interior where the entrance door is, to the exterior edge with its views and light. Resin floors help create a sense of height. The geometry varies between apartments, and Tuckey himself talks about how the kitchens ‘twist and turn like a Tetris object’. These incorporate bespoke brushed steel and brass surfaces, not quite steampunk but nevertheless an echo of the gas holder’s classical mechanical workings. Bedrooms are entered through timber, which brings warmth to apartments. Bathrooms have an appropriately hard, clean feel underlined by concrete tiles and sinks, but brass elements quietly jazz them up. The original gas tanks (or ‘lifts' as they were known) were telescopic, each rising and falling within its frame on vertical rails. The tanks would thus rise to different levels from each other, and this is referenced in the varying heights of the new blocks' volumes. Gasholder 11 is the tallest at 40.5m and 12 storeys (the only volume rising above the ironwork frame), and the other two have heights of 31m and nine storeys, and 27.5m with eight storeys. The idea works brilliantly, charging the ensemble with a slow but massive dynamism, just like the tanks had.

Gasholders London offers communal facilities, including a business suite and cocktail bar by the lobby and a spa on the ground floor of Gasholder 10, while a gym and screening room are on the first floor. These and the lobby itself have interior design by Katie Earl and Emma Rayner’s No.12 Studio. Their aesthetic is masculine and modernist, and much of the furniture deployed is bespoke. They can bring striking, unexpected twists — a pool table in the entertainment suite is covered in black rather than green felt, instantly contemporary yet nodding to the industrial location. Action plays out in the shadow of the gas holders in 1955 film The Ladykillers. Image Credit: 1955 Studiocanal Films Ltd Hr

No.12 Studio is also responsible for the furniture on literally the crowning facility for residents — a shared roof garden on Gasholder 10. Along with the private penthouse roof terraces that top the other two gas holders, the landscaping is by Dan Pearson Studio. Forming a ring around the skylight, it has to be said that it’s more boardwalk than garden, but there are patches of bee-friendly, meadow-like planting with diverse herbaceous perennials, and larger plants are in boxed enclosures, flowering plants spill over their edges.

For Gasholders London, Dan Pearson also landscaped the adjacent space by the canal towpath, and previously, the neighbouring Gasholder 8, which Bell Phillips Architects transformed into the ground-level Gasholder Park in 2015. By contrast, most of the industrial structures that Argent has or will have brought back to life are great brick buildings. So how does Gasholders London fit into its King's Cross estate, with its creative buzz and diversity of forms and textures?

In the hands of many architects, Gasholders London could well have adapted the standard cookie-cutter vernacular of contemporary luxury residential developments, merely curving the form to adapt to the gas holder frames. That could have killed their unique visual impact as a monument to not just its fine Victorian engineering, but other, grittier times — such as those of The Ladykillers. Time for a spoiler alert. In the 1955 film, the gang fail to kill their landlady, and she ends up enriched with the loot. WilkinsonEyre’s architecture certainly doesn’t kill the unique aesthetic of the ironwork structure and, if anything, Gasholders London actually enriches their standing in the skyline. And just like the loot, the gas holders have been shifted just slightly from where they were. The whole estate is enriched by their renewal and the watchwork-inspired treasure inside them.