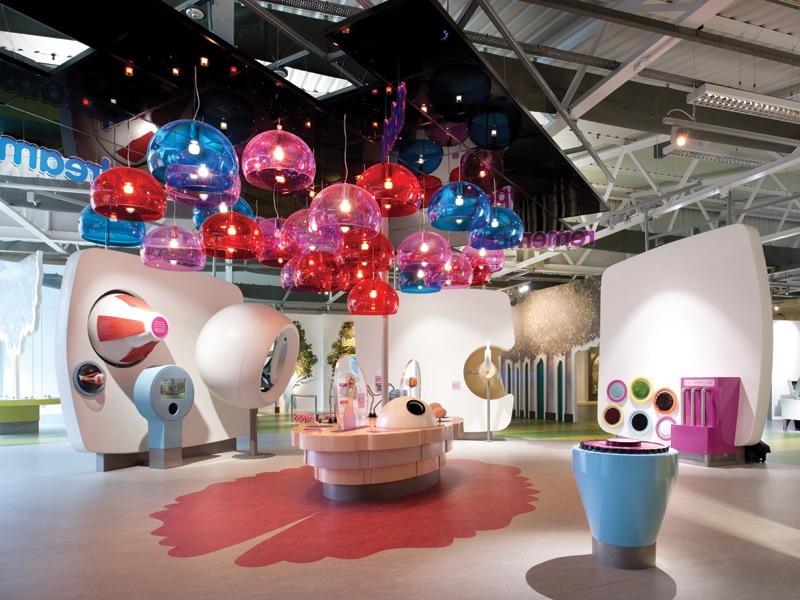 Is linking commercial with attractive, durable and eco-friendly oxymoronic? No! We have sustainable options that tick the boxes

Reduce, Reuse, Recycle. It’s a simple mantra, tripped out merrily by green activists keen to persuade us all to be kinder to the planet. But can it be applied to commercial flooring choices? Well, the reduce aspect is difficult – the average client probably won’t be tempted by a packed earth floor, but the other two are a good starting place.

‘We are frustrated by the existing status quo, which is that everything is going in the skip every five to 10 years,’ complains Ben Allen, principal and architect at Studio Ben Allen. ‘Everyone these days claims that their floors are sustainable, but the big question is longevity. Manufacturers may say that something lasts for 10 years, but the more important question is does it look good for 10 years? For example, we avoid carpets in a workplace environment as, generally, we don’t think they have enough durability. With the average office refit cycle being five to 10 years we find that, by that time, people are desperate for a change.’ Interface’s new Scandinavian collection uses a revolutionary new latex substitute in its carpet tiles. The polyvinyl butyral (PVB) is extracted during the process of recycling laminated car windscreens and replaces the use of the existing petrochemical pre-coat that sticks the fibres to the backing

The challenge he sets himself as an architect is to specify a flooring solution that can be reused through successive refits and redesigns because it still performs and looks good. ‘We’d rather create something that’s too impressive to throw away as it gets more beautiful with age, such as a timber floor,’ he says. ‘An untreated oak floor, for example, needs a bit of maintenance to begin with, but the maintenance becomes less as it develops a wonderful patina of age. And reused parquet looks great.’ Kebony wood was used for the flooring of an eco-award-winning safari lodge located in the Mara Naboisho Conservancy in Kenya. Kebony was selected for its durability by practice Hitesh Mehta Design.

Natalia Meleshkevich of Natalia Interior Design shares this love of reclaimed parquet. She recently specified it for the lounge of the Russian Spa Club in London, which she redesigned with a warm, traditionally Russian feel. ‘I chose the reclaimed parquet because it’s been used before and it’s natural wood; what else could be more eco-friendly? It’s a bit more expensive than some other finishes, but it lasts forever and it’s not complicated or difficult to work with.’

‘Fashion can be problematic,’ says Ben Allen, expressing his frustration at the vagaries of the Pinterest era. ‘If it’s sold as this year’s big thing then in five years’ time it will be out of fashion – and that is unsustainable. We spend a lot of time struggling with colours so that the floor is not fashion-based and conceptually it won’t look out of date in five years’ time. Natural materials are good as they are less susceptible to fads.’ Havwoods’ Relik range is made from reclaimed planks and beams, mainly salvaged from demolition sites in Transylvania, then planed and sanded into straight solid or engineered boards. The tough timber can be painted or finished in many ways to provide bespoke solutions, such as this floor at the Z Hotel in Piccadilly

Wood in particular can be both reused in the same project and recycled into other projects. ‘Engineered floors are better if they are not glued as they are easier to recycle,’ advises Allen. ‘And materials that are thick enough so they can be resanded or repolished are much better than something you have to replace when it gets worn.’

Reclaimed timber is a popular sustainable choice, but covers a multitude of different products. At one end of the scale are actual reclaimed floors such as parquet or Victorian pine floorboards that have a patina of age and use and are simply relaid in a new location; at the other end are what may appear to be sleek, modern, engineered boards, but are actually made from timber reclaimed from other uses; from railway sleepers to barn struts. The solid and engineered bamboo floors from the Bamboo Flooring Company are sustainably grown, biodegradable and FSC-certified. Shown is a solid Rustic Natural Strand Woven Bamboo floor with a click fitting and a 25-year warranty

Russell Calder, marketing director at timber flooring company Havwoods, explains: ‘Reclaimed wood is generating immense interest because of its combination of an intensely interesting appearance and ecologically sound credentials. But traditional sources of reclaimed timber can be a risky specification since supplies can be unreliable and the lack of uniformity makes installation a lengthier and, therefore, costlier process. All our timbers are planed, profiled and sanded using 21st-century production techniques so that they may be confidently specified for any residential or commercial application.’ But timber isn’t the only sustainable flooring, and it isn’t suitable for all applications – a busy call centre, for example, wouldn’t appreciate heels clacking on solid wood all day long. Ben Allen has just specified Bolon flooring for the first time as part of the refit of One Carter Lane, the offices of international engineering company Cundall. The company wanted the highest levels of sustainability for its headquarters, and it became the first project in Europe to obtain the new WELL certification at Gold level (along with BREEAM Excellent and SKA Gold ratings). WELL is a performance-based certification system that takes into account seven categories of building performance – air, water, light, nourishment, fitness, comfort and mind, so the flooring choice had a big part to play. Colour Compositions, Milliken’s first collection of carpet tiles in a plank format, opens lots of design possibilities. It is made from Econyl recycled nylon and also has a cushioning backing made from 90 per cent recycled content

Bolon is a Swedish company started 60 years ago by Nils-Erik Eklund, who began by turning waste textiles into rag rugs. The company is now run by his granddaughters Annica and Marie, who have launched a company recycling plant that means around a third of the flooring comprises recycled materials, and the PVC floor is recyclable at end of use. But it wasn’t just the recycled content that attracted Ben Allen: ‘Bolon is heat sealed and non-porous so it’s easy to keep clean – that means it’s possible to have lighter floors, getting away from the darker colours that predominate in commercial spaces. As it’s possible to create a lighter, fresher feel to the design, the company will have something that will keep looking good for years to come.’ At SHH architects, creative director Neil Hogan adds: ‘Bolon is in a league of its own; nothing else gets close to it.’ Modulyss carpet tiles were specified by building consultancy Woodfellows for the Kingsley Healthcare offices in Lowestoft. The Pure Air100 tiles reduce dust in the atmosphere for a healthier environment and are made from 100 per cent Econyl recycled polyamide

Improvements in the carpet-tile industry have been extensive – the introduction of Econyl recycled nylon fibre has meant that finally, hard-wearing, long-lasting nylon flooring can be sustainable as well. Made by Aquafil, and used in products by Desso, Interface, Danfloor, Forbo, Modulyss, Milliken and many more, Econyl nylon is made from recycled fishing nets rescued from the oceans, wornout nylon carpets and industrial plastic waste, and can be recycled an infinite number of times (although of course the process itself does use energy). Elite Flooring chose Desso’s AirMaster to carpet the Drill Hall university library in Chatham. The clever loop-pile carpet tile has a special construction that reduces the concentration of fine dust in the air, making for a healthier environment. In addition, it is made from Econyl nylon, recycled from waste fishing nets, and has a base made from upcycled calcium carbonate from local drinking-water companies

As well as being made from a recycled material, Econyl also has the advantage of being extremely easy to clean with just water, meaning it has ecological advantages during use as well.

While FSC-certified or recycled wood and Econyl might be the obvious choices when thinking about flooring, there is a wealth of other sustainable options that can be suitable for commercial uses: Havwoods Relik range is made from reclaimed planks and beams, mainly salvaged from demolitions in Transylvania, then planed and sanded into straight solid or engineered boards. This project shows Relik Reclaimed Elm at the Cleaver Restaurant, in Oxford

Cork – Cork is bark, harmlessly stripped from cork oaks that live for 250 years. Cork oak forests are a rich environment for wildlife and cork production employs more than 100,000 people in rural areas of Europe and North Africa, so it’s an all-round winner on sustainability. ‘Cork is a fantastic product,’ says Neil Hogan, ‘although it’s not durable enough for many contract uses. It’s warm to the touch and absorbs sound – we’ve used it successfully in schools. Cork has to be well-sealed to protect it against surface wear, and it is susceptible to damage from water or highly variable humidity. Reclaimed Strip Wood oak flooring was chosen by design company Macaulay Sinclair for the Foxlow restaurant in Farringdon. The wood is some 80-90 years old and mainly comes from the USA

Marmoleum – This resilient flooring is made from 97 per cent natural materials, including linseed oil, wood flour, pine resin and jute, with 43 per cent recycled content. The naturally antibacterial ingredients mean the floor is hygienic and needs less cleaning with fewer harmful chemicals, and Marmoleum is both recyclable and completely biodegradable. However, it can be damaged by things such as stiletto heels.

Bamboo – Bamboo grows rapidly and organically and is, therefore, totally sustainable and biodegradable. ‘Bamboo is superecological and you can’t beat it for density,’ says Hogan. ‘It’s seriously robust.’

Kebony – This softwood from sustainable Norwegian plantations is treated with a bio-based liquid residue from sugar production. The treatment alters the wood at a cellular level until it has properties resembling the toughest hardwoods. It has a 30-year warranty against rot, but is still biodegradable at end of life.

Natural carpeting – There are many natural fibres such as jute, sisal, seagrass and coir that can be used in some commercial environments. As they are less hard-wearing than many other solutions they tend to be more popular in retail where refits are carried out more frequently than in offices or hotels.

While most architects are clued up enough to think about the embedded energy in a product and its lifespan and recyclability, Ben Allen believes that many don’t look closely enough at what they specify. ‘It’s too easy to just make LEED and BREEAM a tick-box exercise; we really need new standards that set higher goals. For example, if it’s made abroad, are the workers paid fairly? Does it promote well-being in use? Ultimately, I’d like to see a more holistic approach.’