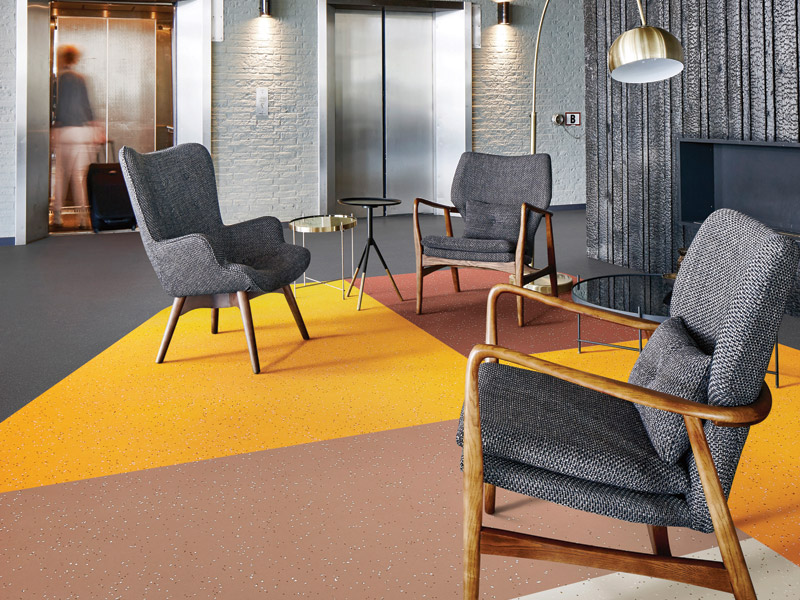 Four pages of flooring products to inform the designer’s choice when it comes to specifying this all-important project element.

The palette is a compendium of 24 colours, all containing a mix of gold, silver, glitter or transparent chips to add depth, expression and draw curiosity.

The range is split into three visual themes created to work alongside each other as well as in their own right: Plain, a collection of striking, solid colours with silver or gold highlights; Shaded, consisting of a darker colour palette with contrasting metallic glitter effects; and Pearl, a range of lighter tones featuring transparent chips and a pearlescent effect.

Interface has introduced a prototype of what it believes is the first carbon-negative carpet tile. The manufacturer says that its Proof Positive tile is a product with the potential to help reverse global warming, claiming that after the tile is made there is less carbon dioxide in the atmosphere than if it had not been manufactured in the first place.

Every day plants pull carbon out of the atmosphere through photosynthesis but release it when they decompose. Interface has taken specifically selected plant-derived carbon and converted it into a material that stores that carbon for at least a generation. The carbon is stored in the materials that make up the Proof Positive tile. The tile’s materials can be recycled to create new carpet tiles at the end of the product’s useful life. Keeping this carbon in Interface’s recycling system ensures that this carbon stays in a closed technical loop, rather than in the atmosphere where it has negative effects on climate.

The Proof Positive prototype tile has a negative carbon footprint, which Interface says it has achieved through design and manufacturing, without purchasing carbon offsets. Since 1996, Interface has reduced its cradle-to-gate product carbon emissions from an average of 20kg of carbon per sq m to just over seven kg per sq m in 2016. While only a prototype at this stage, at less than minus 2kg of carbon per sq m, Interface’s concept tile suggests that it is possible to store carbon in products rather than emit more carbon in the process of making those products.

‘This prototype builds on the 20 years of work we’ve put into creating closed-loop design and manufacturing processes,’ says John Bradford, Interface’s chief science and technical officer. ‘This is an exciting milestone as we endeavour to commercialise ways to store carbon in the products we make, giving our customers the opportunity to choose materials with the potential to reverse global warming.’

Depending on the responses from visitors to the exhibition, each of the three new patterns – Retrostone, Mirage and Magma – will be considered for possible inclusion in the company’s 2018 catalogue.

Desso has extended its Make It Your Own carpet collection with the launch of two new product ranges: Pixelate and Metallic Shades. The collection combines textures, colours and material effects to give architects and designers the opportunity to create unique spaces with an individual atmosphere, identity and personality. Pixelate is inspired by colour layering, and is available in eight colours. The carpet tiles have a soft gradient design with a transition between two yarns, one plain and one multi-coloured. The tiles are designed to be installed randomly with the gradient of the products appearing in different directions.

The Metallic Shades range has been created to inspire designers and architects to experiment with lustrous and matte effects. The 10 colours, which include Copper Mauve, Silver Black, Gold Griege, Silver Light and Pearl Beige, are each available in two different tile formats with differing intensity of metallic yarn. The tiles can be used as a single colour on a large surface, or in combination to create zoning and transition between spaces.

Vinyl flooring manufacturer Moduleo has expanded its Impress range with a number of new designs. Five wood, one stone and three abstract designs have been introduced, providing a total of 12 designs, 44 colours and 72 SKUs.