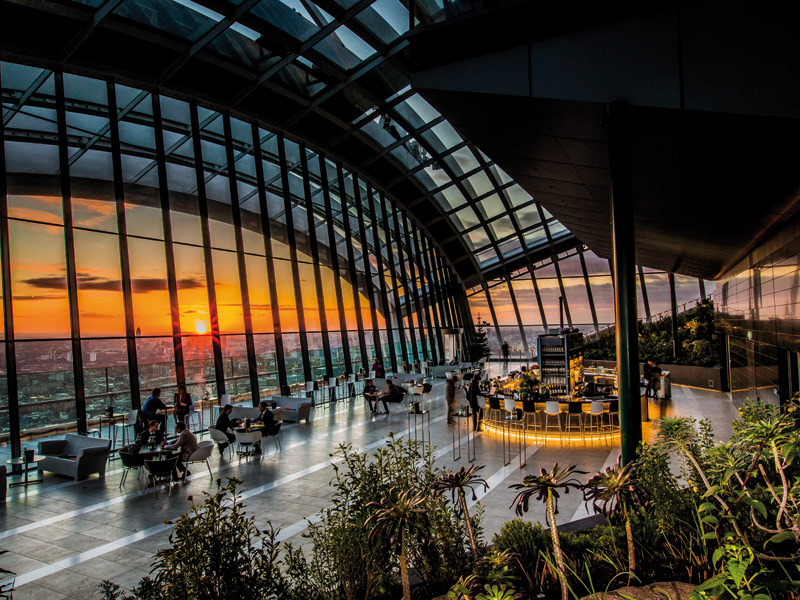 The ins and outs of the Sky Garden - comprising three floors of food and drink offers, all different but designed by o1creative.

As the Architect of the so-called Walkie-Talkie building, Rafael Viñoly has garnered his fair share of adverse publicity. But there is another design story to tell of the 37-storey building at London's 20 Fenchurch Street.

The small interior design agency o1creative has completed not one but the three venues on three floors under the glass dome at the top of the building, collectively known as the Sky Garden - on time and on budget for the operator Rhubarb. And because of the unusual nature of the building, its remit went far beyond furniture and fabric choices.

The team, led by directors Sue Heaps and Derrick Plover, are behind the Sky Garden's offer of the Sky Pod Bar on Level 35, the Darwin Brasserie on the floor above, and the Fenchurch, a seafood bar and grill on the building's top floor, Level 37. To describe the project as logistically challenging is an understatement. o1creative had to contend with a space that had been conceived as a single restaurant with just one kitchen and one toilet block. It had to cater for both a daytime and a night-time audience, and there were non-combustibility issues on Level 35.

On top of all that, the build had been delayed by - among other things - bad weather and when o1creative took over the space, a crane was still there and it was surrounded by what Heaps describes as 'a forest of scaffolding'. In fact, the day the flooring company arrived to lay the floor, 'they had to be turned away; the floor was flooded because the roof wasn't completed,' says Pover. The Fenchurch seafood bar and grill at the very top of the building.

The designers' first job was to figure out where to position the plant rooms for the air-conditioning, and to try to find somewhere for the toilets in the highly glazed site. 'There was nowhere for them to go,' says Heaps, because of the building's three sides of glazing, the kitchens and the plant. 01creative came up with the idea of taking an area that had been allocated as 'landlord's space'. 'We couldn't penetrate the floor for the drainage,' she adds, so instead they raised the level of the floor.

Once the design concept had been signed off, it was a question of getting the materials up. No mean feat when all the office floors below were being fitted out at the same time. 'One of the big challenges was securing the lift space,' to achieve this, explains Heaps. As for those two distinct daytime and nighttime audiences, the space had to cater to the free-access sightseers who might have a coffee in the Sky Pod after spending time on the viewing platforms, and the evening guests who come up for a cocktail and a swanky dinner.

So the design team specified Philippe Starck's polypropylene Bubble sofa, which is as hard as it is hardwearing. Hard finishes were needed across the whole of Level 35, because there are fewer sprinklers on that level. 'We had to discount 90 per cent of the materials that we would have liked to use,' says Pover. Heaps adds that they were considering 'beautiful timber finishes' for the bar on Level 35. 'Instead, we used a lot of glass, metals and mosaic tiling.' A softening of the space is achieved through the Rhubarb's seasonal styling. So in winter Starck's Bubble sofas are covered with faux fur rugs and in spring there are pots of daisies and colourful throws. There are also plans to improve the acoustics by adding drapes at the windows, which will add to the softening effect. The result of the project is three different areas that not only feel very different but that belie the efforts that went into their creation.