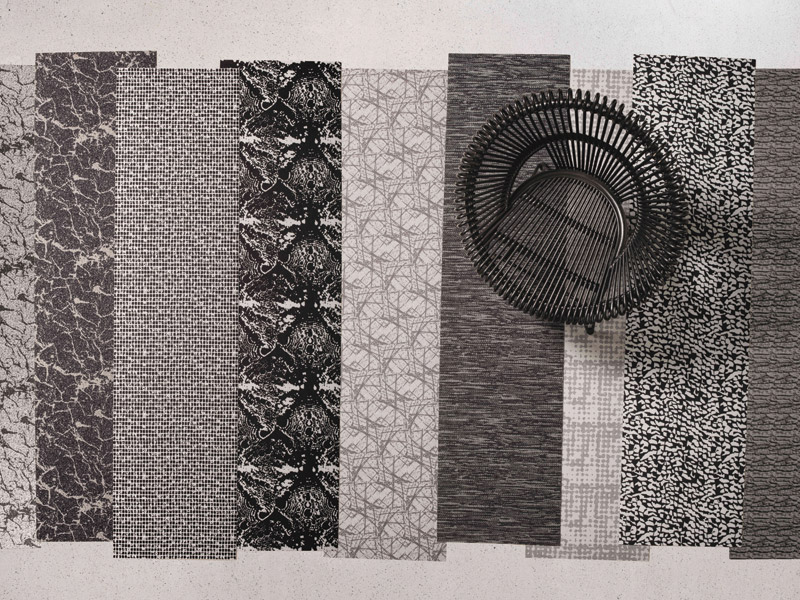 The work of 20th-century textile design icon Tibor Reich lives on in a new collection from Forbo marking his centenary, plus more new surface products

New surface products include Forbo’s centenary Tibor collection that gives a nod to a design icon of the 20th century, Tibor Reich

Forbo
October saw the 100th anniversary of the birth of textile designer Tibor Reich, an icon of British mid-century design. The centenary is being commemorated with the launch of a new Tibor collection, a collaboration with Forbo Flooring Systems. The collection showcases eight of Reich’s designs; from designs that have never been seen to classic statement pieces, highlighting  his pioneering talents. During the latter half of the 20th century, Reich revolutionised surface pattern design and was instrumental in developing many cutting-edge design techniques still relevant today.

These methods and techniques, together with his passion for texture and the way in which he synthesised nature, offer an inspirational approach that takes Reich’s vision into the modern era. The collaboration with Forbo came about after Jason Holmes, head of design for textiles at Forbo, contacted Sam Reich, MD of the company Tibor. Holmes says: ‘There was a major retrospective exhibition of Tibor Reich’s work in Manchester and I discovered his grandson had relaunched the Tibor brand, focusing on reproducing some of Tibor’s high-end upholstery fabrics.

‘Sam and I met and quickly realised that there were opportunities for Tibor’s designs to work on other mediums. I particularly liked the idea of digital printing on to Flotex as it not only linked in with Tibor’s textile heritage but could also faithfully reproduce Reich’s original designs, many of which came from a process called “Fotexur”, in which he would create designs inspired by nature using a variety of innovative photographic techniques.’ Reich was a prolific creator and has left extensive archival material, some of which is housed at the V&A and in the University of Leeds’ textile archive. His family also has a significant record of his work and it was from that Forbo was able to develop a number of design concepts.

‘It was clear from the beginning that what we had was a wonderful opportunity, and in truth the hardest job was in design  selection,’ adds Holmes. ‘Being a textile designer, Reich worked in the same way we do and as such we didn’t need to interpret the ideas, which were meticulously worked out, very often in repeat and some even came with colour suggestions. This made the process really intuitive.’ Reich had collaborated many times in his career across many design disciplines including textile, floor covering, wall covering and ceramics. He was commissioned by the Queen, designed for the Festival of Britain and created the fabrics for Concorde.

Many of his fabrics were also used by leading furniture manufacturers including G-Plan and Ercol. But this latest collaboration shows the versatility of his work and how timeless many of his ideas were. In developing the collection, Forbo has selected a group of patterns that capture the spirit of Tibor and as such the collection is fresh and modern, but with a distinct mid-century feel. Holmes says: ‘It was critical to us that the collection would be relevant to today’s market, and that meant careful design choice and the right colouration. We worked closely with the Tibor design team, headed  by Hannah Auerbach George, to achieve an overall range that does just that while still being true to Tibor’s vision.’

Desso has launched two new additions to its Essentials collection that celebrates iconic textiles. Inspired by the diversity of denim, new Jeans provides six individual interpretations of denim in three structures, to zone or create large spaces through different textures and subtle patterns. Also added is Ridge, a finely textured carpet tile available in 12 shades. With a detailed structure it is intended as an ideal base for minimalist surroundings. ‘We are constantly looking for honest and simple solutions to meet the needs for creative and sustainable carpet designs,’ says Ludwig Cammaert, design and technical development director at Desso. ‘As the Essentials collection focuses on fundamental archetypes, we have selected denim as a great source of inspiration, a starting point that offered numerous possibilities.’

Reed Harris’s Wood-Stock and Type 32 collections were specified for the London office of Merkel Insurance, along with some 400 sq m of durable wood-effect porcelain planks measuring 2000mm x 200mm x 5mm. The office space, designed by EDGE Architects, is at 20 Fenchurch Street, the landmark skyscraper otherwise known as the Walkie Talkie building. Wood-Stock is a porcelain wood manufactured using the latest slim technology to produce planks that are very long and thin. Six shades reproduce the movement and texture of real timber, with the technical advantages of porcelain including an antibacterial surface treatment created by Microban. The Type 32 range comprises of four graphics, available in either cool or warm effects on four base colours from Reed Harris Wood-Stock Slimtech range.

Hakwood has launched Wall Tiles, a new collection that uses a hanging system for easy installation and allows architects and designers to create bespoke feature walls. The wooden tiles make it possible to create a vertical style statement by designing an individual pattern landscape.  Each tile is a Duoplank pre-fabricated wood tile available in a variety of designs, dimensions, thicknesses, colours and textures. Italian flooring brand Alpi has launched the first fruit of its partnership with Piero Lissoni since the designer joined the brand as its art director in 2015. The Designer Collection includes two products: Xilo 2.0, a new collection of natural-toned veneers in a chromatic range of four colours, and Tarsie, a representation of three geometric motifs from the wood-working tradition, reproduced through inlay-effect printing on the variations of Xilo 2.0.