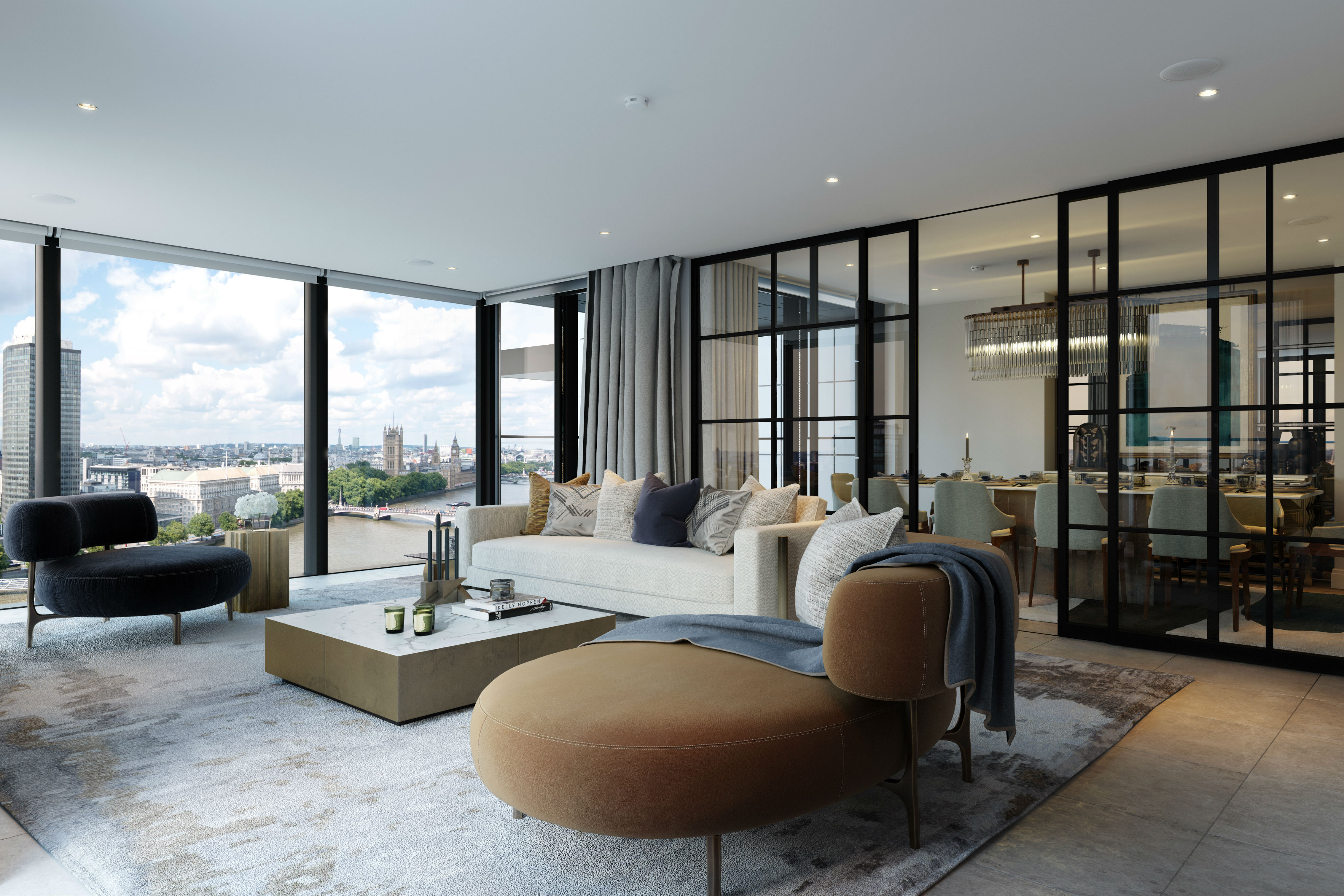 St James, part of the Berkeley Group, has launched its final collection of homes in the Dumont, the last of its developments on Albert Embankment.

Set across the Thames from Tate Britain, the prestigious riverside address Albert Embankment continues to thrive under St James’ redevelopment, adding to the South Bank’s vibrant cultural scene. Part of the Berkeley Group, St James has recently launched the final release of homes at its third and final development project for the area, in the David Walker Architects designed residential building called The Dumont.

Consisting of three structures at varying heights, the Dumont’s angular design complements St James’ other Albert Embankment developments – the curving Corniche, and the brightly coloured, RIBA-award-winning Merano Residences – which sit either side of it. Creating a rich contrast against the other buildings with its sharp angles and textured terracotta facade, the Dumont completes St James’ architectural vision of the new Albert Embankment and solidifies the redevelopment of the area.

Known as the Alta Collection, and comprised of six large, light filled four bedroom apartments, the final homes available within the impressive development boast views across the river, overlooking landmarks including the London Eye, Battersea Power Station, the City and the Houses of Parliament. Located from the 18th to the 29th floor of the Dumont, each of the new properties is defined by large, open plan living areas with floor-to-ceiling windows that flood the rooms with natural light.

These bay windows are especially magnificent in the living rooms, where they feature panoramic views of the city of London. In all of the Alta Collection properties, the living areas and kitchens are orientated towards the river to maximise light, space, and the view outside. The spaces are also divided into a living and dining room by a geometric, glass sliding door; replacing a traditional wall, this unusual design feature creates a fluid, open area perfect for living or entertaining.

Within the Alta Collection apartments, the open plan design is accentuated by a chic, neutral colour scheme; a cream and taupe palette is complemented by shades of caramel and hints of blue in the soft furnishings. Buyers also have a choice of two colour palettes in the fully furnished kitchens, which are finished with metallic highlighting, chamfered stone details, and Miele appliances.

The interiors of the Alta Collection have been created by British interior designers Spinocchia Freud, who have used refined features and clean lines to create stylish, airy spaces. Discussing their work, the designers said, “as an interior design studio, [we] create a new kind of luxury through a curated approach. Our team collaborates with artists, designers and craftsmen to develop bespoke pieces and finishes that are project specific. This focus on the attention to detail creates unique residences with elegance, comfort and culture in abundance.”

One of the apartments is also being used as a show home for potential buyers; its interiors were dressed by Honky, with the aim of complementing the incredible view. “As you enter the apartment you are greeted by a long corridor leading down towards the large open plan living space. Fitted mirror offers a glimpse of the view to come while the textured geometric wallpaper creates a luxurious feel,” explains Millie Parker, a senior designer at Honky.

“With views over Parliament, [we took] inspiration from the 16th Century interiors,” she continues. “Green accessories, plump green velvet cushions, the splashes of green in the artwork and upholstered dining chairs are all inspired by the green seats in the House of Commons. Chairs upholstered in a boucle with hints of green, soft velvets paired with dark timbers, brass accents and white marbles create the luxurious feel deserving of such an apartment.”

As well as benefiting from a prime London location complete with a selection of transport options, residents of the Alta Collection – and all other residents living in the Dumont – will be able to access a range of five-star amenities. Shared with the neighbouring Corniche, these include a games room, ten-pin bowling lane, and private cinema in the Dumont’s basement floor; residents can also easily walk through to the Corniche’s gym, spa and pool facilities via an underground walkway.

With the aim of connecting the community living within the new Albert Embankment development, St James has also created several public areas across the Dumont and the Corniche that can be used by both buildings’ resident. These include the Skyline club lounge on the 19th floor of the Corniche, as well as the 12th floor Observatory in the Dumont, which features a private residents’ lounge, dining area, and secret garden.