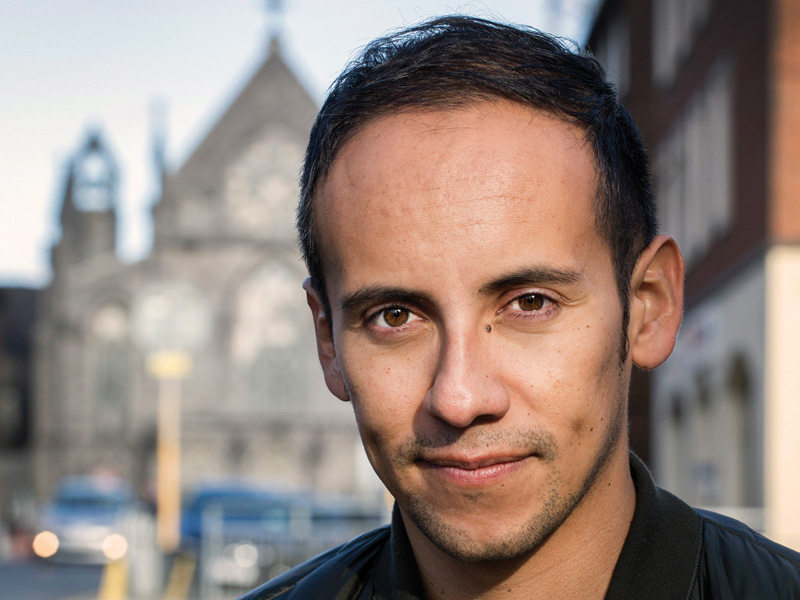 Inti Guerrero, the curator of this year’s EVA International — Ireland’s Biennial, shares his recommendations for the best exhibitions, books and events of the spring

Born in Bogotá, Colombia, but currently based in Hong Kong, Inti Guerrero is Tate’s adjunct curator for Latin American Art, and this year will be curating the 38th EVA International — Ireland’s Biennial, opening 14 April in Limerick. Guerrero was previously associate artistic director and curator at TEOR/éTica, an independent not-for-profit art space in San José, Costa Rica. He has curated exhibitions at Tate Modern in London, the Museum of Modern Art of São Paulo (MAMSP) and the Carrillo Gil Museum in Mexico City, among other institutions in Latin America, Europe and Asia.

Fourth Plinth commission: The Invisible Enemy Should Not Exist by Michael Rakowitz
Until March 2020 The new commission for Trafalgar Square’s Fourth Plinth is unveiled on 28 March, and is perhaps the plinth’s most politically challenging work yet. Created by American artist Michael Rakowitz, it forms part of an ongoing project in which Rakowitz attempts to recreate thousands of archaeological artefacts destroyed by the so-called Islamic State (IS). For the Fourth Plinth commission, Rakowitz uses empty Iraqi date syrup cans, representing the nation’s once-booming industry, to recreate the Lamassu sculpture that stood at the gates of the ancient city of Nineveh from 700 BC, but was destroyed in 2015. Trafalgar Square, London This comprehensive retrospective from the celebrated British artist Frank Bowling — exploring work from the Sixties to the present day — marks his first major exhibition in Ireland. During the Sixties Bowling moved to New York, where he first experienced painterly abstraction. Taking influence from the Colour Field movement, Bowling’s work has moved increasingly towards pure abstraction, with influence from his native Guyanese heritage, with references to its landscape. IMMA, Dublin This exhibition, curated by Cosmin Costinas, considers Bengal’s position at the core of various geographical networks, reflecting on the circulation of people and ideas in different historical periods, and focusing on the material histories of textiles as a central element. I see the pertinence of this show, as it occurs during a moment of intensified social division in this region. The exhibition is co-produced by Dhaka Art Summit, Para Site in Hong Kong and the Museum of Modern Art, Warsaw — and will also tour to TS1 Yangon in 2018. Para Site, Hong Kong Having gone to art school in Colombia, I couldn’t be more proud and excited to see the much-awaited retrospective of Latin American artist Beatriz González, whose work has gained recent international canonisation following its inclusion in The World Goes Pop exhibition at Tate Modern, and Documenta 14. Her work, which perceptively documents political violence in the second half of 20th-century Colombia, engages with mass media to solidify the memory of a nation. Employing a variety of media including paint, sculpture, drawing and press cuttings, González challenges the way we view art. Palacio de Velázquez, Museo Nacional Centro de Arte Reina Sofía, Madrid

5 Is the Living Body the Last Thing Left Alive?: The New Performance Turn, Its Histories and Its Institutions
Out now, published by Sternberg Press This book is for performance lovers; dedicated to the renewed encounter between dance, performance and global contemporary art institutions, it discusses a ‘new performance turn’ that has emerged in the second decade of this century. The book includes 18 essays and conversations by a variety of art world experts, as well as inserts by 11 artists and artist groups. I had the pleasure to publish a conversation between the Peruvian curator Miguel Lopez and the Chilean critic and essayist Nelly Richard. Para Site and Sternberg Press Naturally, I’m looking forward to the opening of EVA International, which I will be guest curating this year, following on from Koyo Kouoh’s brilliant presentation in 2016. It’s based in Limerick and reaches across the whole city. I’m working on showcasing interconnected narratives of early 20th–century Ireland — taking the construction of the Ardnacrusha hydroelectric dam and its impact on Irish society as a starting point — with the sexual and identity politics of the present day. I’m excited to feature new commissions from artists such as Malala Andrialavidrazana and historic works by artists including Bruce Conner. Limerick, Ireland