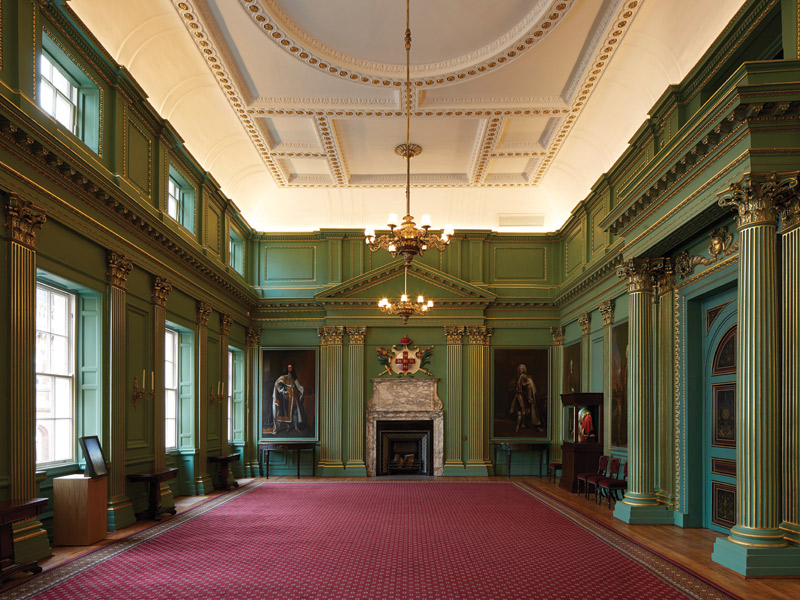 A civic asset that few in York knew they had, this 18th-century building is now welcoming the public for historical appreciation, tours and events following a £2.4m restoration and refurbishment

At times it must seem a thankless job being a conservation architect: you put so much skill and sensitivity into restoring a building to the point where the work is barely visible. York’s Grade I listed 1732 Mansion House – the UK’s first purpose-built house for a Lord Mayor – has just completed £2.4m and five years’ worth of restoration and recuration, courtesy of architecture practice De Matos Ryan, stripping out decades’ worth of accretions. But to walk around it you would think the building had always looked much like this.

The same serviceable but dull council-issue rugs and carpets are here, along with the richly varnished furniture that has seen many a banquet and council meeting; the state room walls are still covered in the same coat of slightly too-bright (for Georgian) green paint they received in the Eighties. But to those in the know, the difference between the partially used civic facility of 2013 and now is huge. Called Open Doors, the renovation proposal was awarded £1.2m of Heritage Lottery Funding because it was about opening up the house as a community resource, a historic asset with space for meetings, events, and activities. The mayor’s flat (relocated to the attic space decades ago), has been given a lick of paint and a new IKEA kitchen – so far, so austerity-friendly. But ‘open doors’ is what the building now has: one of the most tangible differences to the community must be that the grand front doors now do, literally, remain open all day, thanks to a simple, curving, glazed draft lobby. Says practice director Jose De Matos: ‘People used to be able to visit the house by appointment...But as far as the public were concerned it was closed. The perception was that only the mayor and important guests were allowed in… The moment you open doors... people come in, because they are curious.’ By clearing out every room that had previously been co-opted as offices or storage, the original grand mansion is restored to its original splendour and its rooms programmed to enhance the house and city’s heritage narratives as well as its commercial appeal. A thread of subtle interpretation runs through each space, utilising the treasures that had been either hidden in archives or displayed in ways that obscured their beauty or meaning. The Mansion House has an impressive collection of ceremonial gold and silver, previously locked in a safe, which is now displayed strategically, along with paintings and other objects. De Matos Ryan worked closely with curator Richard Pollitt, exhibition designer Redman Design and interactive specialist Peel to keep the displays subtle. Says Pollitt: ‘What we didn’t want to create was an environment that felt like a museum. We didn’t want labels. We didn’t want that feel of being set in aspic.’ Once through the front doors, visitors see the entrance hall and stairway restored to their original states, with a large dining room on the left, now repainted a rather contemporary (but authentically Georgian) sage colour. The dining table has been laid with the mansion’s exquisite silver, glass and dinnerware, but in such a way as to evoke all stages of a banquet. Two ceremonial swords and the Mayor’s Mace are hung o. the wall in a display case, with minimal captions – a small interactive nearby provides all the necessary insight, a format followed pretty much throughout the house. Keeping labelling to a minimum, in part stops the house from feeling like a museum, but also allows the spaces to be inhabited fully for a whole variety of functions, during which the screens can be removed. A major improvement in De Matos Ryan’s scheme is the removal of every kind of fancy drapery that previously obscured the deep-set Georgian windows. Now visitors can revel in Mansion House’s location, looking on to medieval York at the front, Guildhall and river at the back.

The first floor holds the main event: the stateroom, running the whole width of the house, with tall windows looking on to St Helen’s Square. In front of these windows, an interactive screen gives the view that would have been seen in the past, from Roman through medieval times. While the budget didn’t cover a repaint, the walls have been hung with a very coherent sequence of huge oil portraits of York’s past dignitaries, once in storage. Only the ceiling has been repainted, a crisp white, to offset the lavish gilding (not original) of the plasterwork and consuming a large chunk of the conservation budget. The dining room’s table is set with sliver, glass and dinnereare to evoke all the stages of a five-course dinner

At one point in the past – probably when the mayor’s flat moved into the attic – the decision was taken to tie the state room ceiling to the roof to ‘stabilise’ it, which ‘caused all sorts of problems’, says De Matos. The structural engineering work to correct this was intense, with the roof having to be completely redone. A lot of the work here – and elsewhere – has gone into making services invisible, removing night storage heaters, for example, installing a new museum-standard heating and ventilation environmental system, and embedding most of the services in the floor.

While some of the existing paintwork and wallpaper has been retained, De Matos Ryan created a completely new colour strategy based on Georgian tones, partly through paint analysis, so that there is a sense of coherence of palette throughout the house. The grand front doors can now remain open all day, thanks to a curving glazed draft lobby

Behind the state room, the Lord Mayor’s Drawing Room has been largely untouched, in shades of pale yellow, set with some of its priceless china collection. A staircase to the right has been restored, removing partitions that had obscured a small room, which must have pivoted off an original, smaller staircase. This room now floats, suspended and inaccessible, with a rather poetic air to it – the ‘lost room’, De Matos calls it.

The reintegration of this rear staircase into the general circulation scheme has also played a major role in enhancing the state room’s appeal as a wedding venue: previously, with access to only the main staircase and one door, health and safety had deemed it too dangerous to allow more than 60 guests in there (though it had been designed for 200). Now it can now take 120.

On the second floor is a balcony overlooking the state room, behind which two rooms – most recently offices – have been transformed as silver and gold galleries. The choicest items from the collection are displayed in tall cases designed to be as unobtrusive as possible; De Matos says the idea was to ‘blur the boundaries between room and display case’. For me, one of the most atmospheric newly restored public spaces is the basement, where De Matos Ryan has fully reinstated an 18th-century kitchen. Says De Matos: ‘The kitchen has always been there and has always been used. But it had acquired layers and changes through time.

In the 19th century, they completely relined an 18th-century floor, probably due to damp. A whole new floor was added. And, sometime in the Fifties, someone decided to cover that with a damp-proof membrane and applied vinyl asbestos tiles, and then everything else was lined in Formica.’

All of that clutter has been stripped back and the kitchen – complete with coal-fired stove – is now presented as a working Georgian kitchen, .it for cooking demonstrations. On one table, an interactive element uses X.Box Connect technology to coach users through the creation of Georgian dishes – such as roast guinea fowl – assisted by food historian Dr Annie Gray, who guides cooks through the process on the adjacent screen. There is a charmingly worn, well-used look to the kitchen, including small areas of peeling paintwork. ‘We didn’t want to sanitise it too much,’ says De Matos.

The adjacent scullery has been converted to a gleaming 21st-century catering kitchen, so that the Mansion House can handle everything from small dinner parties to wedding banquets. The public was invited to take part in several stages of the design, including what to do with the exterior. Its choice, shown here, is probably close to how Mansion House looked in the 1890s

There is a holistic and authentic quality to the experience, which De Matos says is down to the unity of the team. He says: ‘The joy has been to be involved in the day-to-day process of curating and designing the stories and narratives that run though this house, to make it engaging – and particularly for younger year groups.’ There is plenty of choice as to how the public engages, Pollitt says: ‘They can come in and wander around. They can pick up a leaflet. They can have free iPad or audio guides (after paying for admission). A lot of people do take them and use them.’

The public was invited to participate in several stages of the design, including the choice of what to do with the exterior. Over the centuries, 69 layers of paint had been added to the original stone and brick facade. A variety of options were offered up for public vote (from neutral brick and stone to a range of painted finishes). The public chose the current one, probably close to how it was around 1890.

In all, it feels like the building hasn’t been so much refurbished as rehabilitated. As Pollitt – mustering the famed dry, Yorkshire wit – states: ‘It’s not bad for a two-bedroomed council house.’ De Matos concludes: ‘There are nine million visitors a year to York, who needed to be made aware of this asset they have always had.’ It would appear that message was received: on its opening weekend in January this year, 3,000 visitors flowed through its doors.