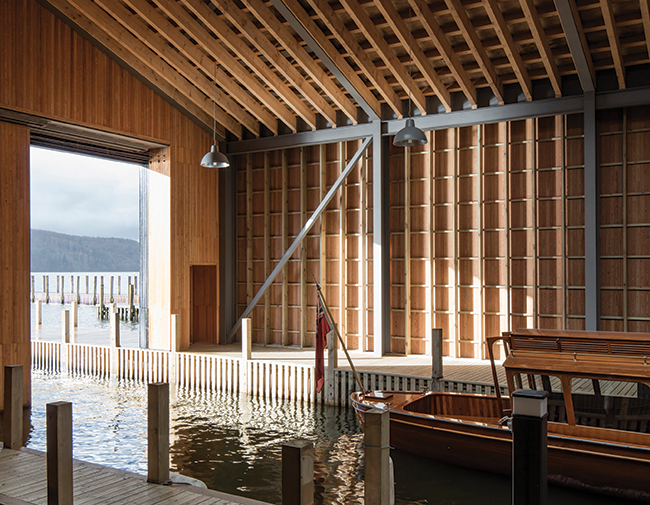 Nestled on the shores of Lake Windermere, Carmody Groarke’s new Windermere Jetty museum harnesses history, craft and landscape to curate a visitor experience that will evolve over time

‘We wanted the picturesque and the industrial to hold equal balance within the museum,’ says Andy Groarke, co-founder of Carmody Groarke, as we walk towards the practice’s new project in the Lake District. Indeed, when your site is based on Lake Windermere and is the first new building for 50 years on its shores, retaining a close connection to both the history and the landscape will always be central to the brief.

Windermere Jetty is the successor of the defunct Steamboat Museum, founded in 1977 by George Pattinson, a private collector of steam launches. Since then the collection has grown to 40 vessels that represent the history of boating on Windermere since 1780. Made possible by a £13m National Lottery Heritage Fund grant, it was important for the client — the Lakeland Arts Trust — that the new 2580 sq m museum not only repair boats but also present the knowledge associated with 200 years of local nautical history to the public, with the aim of appealing to both the local and the visitor.

The cluster of buildings sits subtly within the landscape but appears as a monolithic whole when viewed from the lake. Credit: Christian Richte

With the aspiration for the museum to create a physical and visual connection between the land and water, each of the five buildings is either orientated around a view across the water or according to the requirements of transferring a boat from the water to land for repair. Set on the largest public piece of land bordering the west side of the lake, the museum hosts an ambitious programme. Two lofty exhibition halls, one indoors and the other a ‘coats-on’ undercover wet dock, sit centrally within the cluster. The public jetty, soon to be connected to the lake’s ferry service, runs past the cafe and education space and creates a public link from the road through to the water. The technical aspect is complemented by the conservator’s building, which sits removed from the other buildings next to a custom-built slipway.

The structure was never just going to be a traditional littoral boat house. ‘This is bigger in scale and purpose than the vernacular,’ states Groarke, referring to the choice of a new material and structure. Supported by a utilitarian steel portal frame, four of the buildings are clad in folded copper sheets — only the Douglas fir cladding of the wet dock recalls the familiar local boat houses to any extent. Formally, the pitched roofs borrow from the agricultural vernacular typical to the area. These aspects lend an industrial feel, referencing the gravel-extraction mill that sat on site in the earlier half of the 20th century. Four of the buildings are clad in folded copper sheets, partly the result of a conversation with local planners. Credit: Christian Richte

According to Groarke, the buildings are shaped around the need to move very large objects from land to water: ‘Preconfigured movements dictated much of the plan — boats are part of the process.’ The wet dock has been built in line with the century-old gravel channel to allow access for the deep hulls of the steamboats, and the need for a slipway dictated the height and orientation of the conservator’s building, which sits at an angle to the others. A datum is set across site by the blasted river gravel plinths, which raise the less resilient materials above the risk of flood.

Within the workshop, Penelope sits hull up, Lady Elizabeth waits for a final coat of varnish and Esperance — the houseboat filmed in an adaption of Arthur Ransome’s Swallows and Amazons — waits in the yard. These two main elements of the brief — conservation and display — tie together the arrangement of the buildings within the landscape, suggesting this museum’s role is more than to simply exhibit but also to perpetuate an interest in the objects it displays. This is particularly clear within the wet dock, where the water penetrates the exhibition space, allowing users to look down into the boats from various levels. The exhibition hall, one of the key moments in which 200 years of local nautical history is presented to the public. Credit: Christian Richte

Described by Groarke as ‘a counter-change of colours and form’, the cluster of buildings sits subtly within the landscape but appears as a monolithic whole when viewed from across the lake. The material choice is partly the result of a conversation with the local planners, where a series of pre-oxidised copper models was shown to suggest the ageing over the next century. Designed as a building that is ‘all front’ because of the multiple access points, the relationship between the cladding and water is crucial — from the lake the dark mass of the building seems more noticeable where it is reflected on the wind-flecked waves than against the shadowed topography rising around Windermere.

When you get closer to the museum on land the large dark forms are punctuated by fleeting views of the lake through 3m-high windows and through the voids between the forms of the buildings’ protruding eaves. Here the museum’s cladding takes on new qualities and stands in stark contrast against the lighter sky. Internally, the finish and treatment of timber creates a hierarchy of spaces relevant to their future uses within the museum — the varnished Douglas fir boards in the entrance area are markedly different from the planed scaffolding boards cladding the conservator’s space. It is one of Carmody Groarke’s strengths that its projects often add to the brief — such as the attitude towards re-use of materials in Studio East Dining (2010) and the Filling Station (2012), and the addition of a walkway suspended around Mackintosh’s Hill House (in progress) when the brief asked for a simple visitor centre. In Windermere Jetty’s case, this is seen in the addition of the ‘buffer space’. Each of the five buildings has a distinct function but is composed of three common elements: the central ‘nave’, consisting of the main exhibition space or workshop, flanked by a support and a buffer space either side. The outdoor, sheltered buffer spaces are flexible areas that can be reappropriated for boat repair, displays or outdoor exhibitions — however, more often than not, this ‘terrain vague’ will simply make use of the space in-between the buildings to frame views out towards the water and landscape beyond.

The form resulted from Groarke’s observation that activities around the lakes tend to be binary — inside or outside — and looks to create a middle ground under the cantilevered roof. The resulting interaction between building and public matches well the requirement of the Lakeland Arts Trust that the museum should draw an audience from all backgrounds and demographics. Carmody Groarke has a range of projects that weigh heavily on time as a key factor, whether it’s a pavilion with a three-week lifespan or a war memorial that is planned to last 250 years. Groarke gives the impression of this being an integral part of the design process: ‘It’s about looking at our cultural history embedded in that place, and also seeing the effects of time on things.’ This awareness of the relative temporal status of each project influenced how the museum should reflect this, both programmatically as well as materially. Groarke acknowledges that all projects are in effect temporary in contrast to the landscape: ‘Experience has taught us that certain materials will have an inevitable lifespan — there is a tactic of replacement and reconditioning.’

To Groarke there is an apparent weight set on the importance of a temporal relationship to the landscape: ‘There is an economic, environmental, spatial, tactile, experiential quality and somehow the material decision must be made applicable to their time and place, their here and now.’ It therefore seems relevant that the material of the museum — a typology that inherently maintains objects from the past — should itself show its age. Groarke jokes that ‘nothing is stainless in the Lake District’, referring to the stainless steel that the practice’s competition entry was originally clad in. The pinned and folded copper cladding that replaced it sensitively acknowledges the passage of time through patina and also references the craft that the museum has been built to showcase. The pitched roofs borrow from the agricultural vernacular typical to the area. Credit: Christian Richte

‘Externally the copper not only registers the maker’s mark on day one, but can show how the building is used by conservators or visitors; it can register different traces and different patterns of use,’ says Groarke. Likewise, the scaffolding boards in the conservator’s workshop will record the use, and misuse, of the space. The museum and its contents are also both chronologically aligned: as the conservation programme advances and the boats are visibly returned to a fit state, the building itself takes on a patina and maps the prevailing wind or occasional floods.

There are material and theoretical aspects of Windermere Jetty that are reminiscent of earlier Carmody Groarke projects — the resurgence of certain materials, or the idea of framed views orientating the building. It seems that the practice has developed a canon of findings from its own work and has used the earlier temporal projects as 1:1 models, taking advantage of its impunity towards qualities such as weathering and time. Through testing how ideas translate directly into architecture in a relatively quick manner, Carmody Groarke has now been able to introduce these in a more permanent manner at Windermere Jetty. The visitor’s journey is carefully curated throughout the museum. Credit: Christian Richte

‘The boat has started leaking again’ is generally not what you want to hear when you depart the museum’s public jetty for a trip around the lake — but somehow the fact that the boat you are in has been partly rebuilt in the conservator’s yard that you have just looked around reinforces to the visitor that you are partaking in the ongoing development of the museum.

The success of this project is that it doesn’t rely on a specific archetype to define the uses — the utilitarian structure has been designed with the programme and topography as primary considerations. The visitors are led through the site following a series of carefully composed views that suggest a route — from the cafe with its panoramic view of the lake, to the exhibition halls and then to the conservator’s yard to glance through the doors at the repairs in progress. Carmody Groarke has used the project’s seven-year gestation period to think, draw and eke out opportunities and in doing so has not designed a static museum but one that skilfully scarphs together a utilitarian space to foster local knowledge — and one that doesn’t attempt to compete with the landscape. Through balancing the brief, programme and materiality around the importance of the relationship between landscape and water, Windermere Jetty is a project that is open to new conditions and unknown future needs.