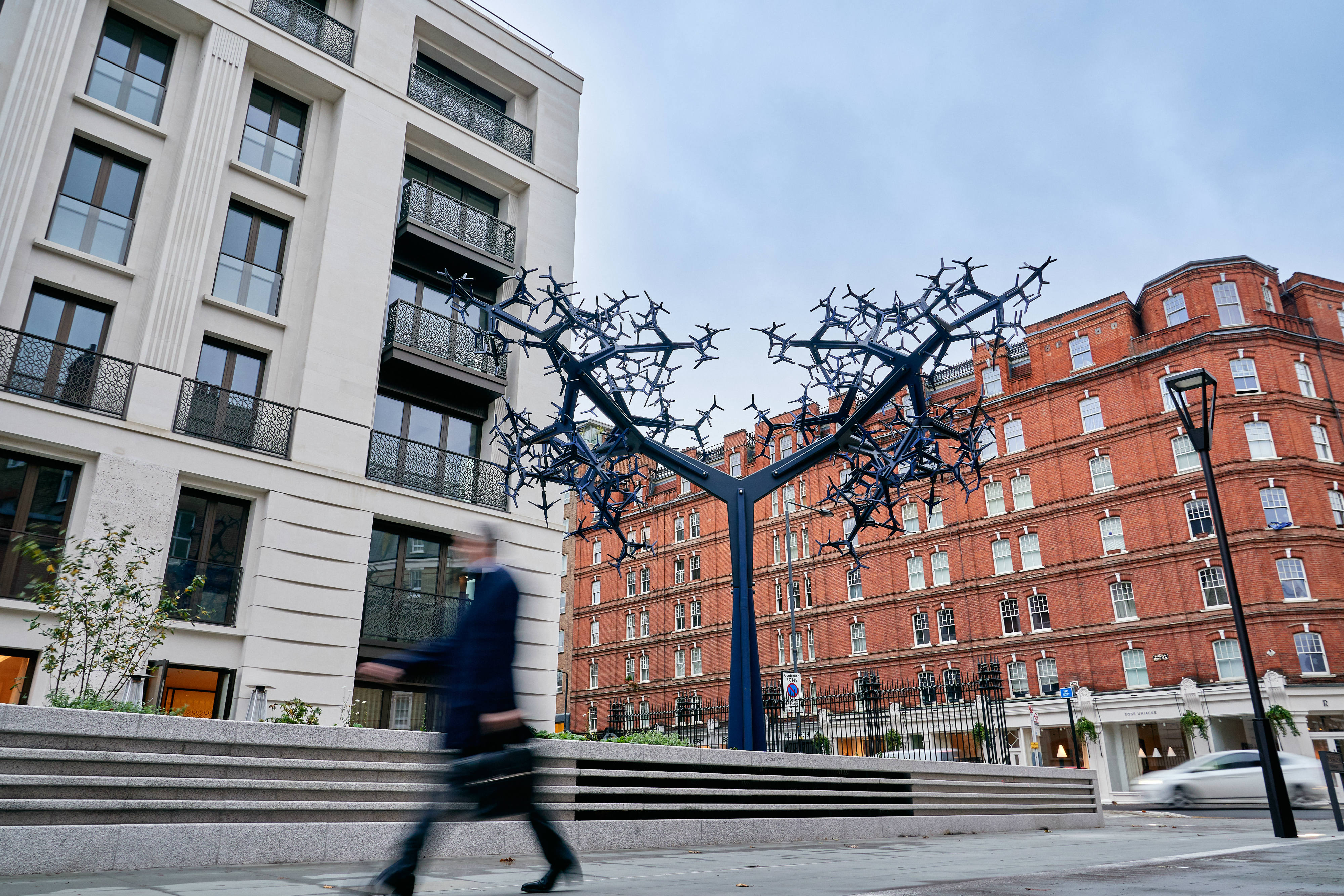 One of London’s most anticipated new neighbourhoods, Chelsea Barracks, has recently hit a series of exciting milestones

Prominent new neighbourhood Chelsea Barracks has recently welcomed its first residents. Though it is situated in the heart of Belgravia and connects faultlessly with the surrounding streets, for the last 150 years the area has been out of public reach – it was previously an army barracks. However, thanks to the new development from Qatari Diar Europe, the former army barracks has been transformed, now encompassing a collection of residences, penthouses, mews and townhouses.

Five of the site’s 12.8 acres has also been converted into public green spaces with seven garden squares, each with its own distinctive theme. As well as this, residents of the new development will have access to a range of private amenities within The Garrison Club, including business suites, a cinema, and a state-of-the-art spa and health club. If this wasn’t enough, residents of Chelsea Barracks and the local community will benefit from sports facilities, shops and restaurants, which will open as part of the growing neighbourhood.

Not only were the first residents moving into Chelsea Barracks in September, but the development announced completion of its first fully furnished private residence. Designed by the multi-award winning studio Elicyon, the residence is comprised of four en-suite bedrooms – including a master with an added dressing room, two living rooms, a study, dining room, cinema room and large kitchen, the residence overlooks the Royal Hospital Chelsea.

Taking inspiration from military uniforms and artillery, Elicyon has experimented with a smart blue colour palette set against an ivory base. The team has used gold accents on top of the cool colours to create a relaxed, opulent feel to the space, while blackened bronze detailing adds an industrial twist, in a nod to the site’s neighbouring Chelsea Bridge. “We feel hugely privileged to be involved in this truly unique development,” says Charu Gandhi, founder and director of Elicyon. “It’s unusual to be part of a project that allows us so much creative freedom with the materiality.”

“Looking into the history of the site, and the local area was a journey of discovery and personally one of my favourite parts of the design process,” Gandhi continues. “I am very proud of the final design, our experimentation with colour and the way in which we blended very sleek contemporary aesthetics with vintage pieces to create a rich interior with interesting textures.”

The residence’s wide doors and high ceilings flood the space with light, while 19th-Century British carriage lights hang overhead. Many of the rooms have been finished with English herringbone and marble flooring, and though a large proportion of the furnishings within the residence have been created bespoke by Eliycon, the apartment also features some standout pieces from international interior houses, including Andrew Martin, Arteriours, and London based rug specialists, Colbourns.

"The unveiling of our first show residence and The Garrison Club at Chelsea Barracks is a significant moment for us,” Chief Sales and Marketing Officer at Qatari Diar, Richard Oakes, mentions. “The residence has been brought to life with a design that will resonate with the tastes of our clientele; this is teamed with a distinct level of quality and consciousness that we have consistently sought to deliver across the development. Furthermore, Elicyon has worked closely with us, and our team of collaborators, to design some very special spaces within our first reveal of The Garrison Club.”

A private Club for Chelsea Barracks residents, The Garrison Club takes its inspiration from London’s rich history of private members clubs – but has facilities that could rival the world’s leading five-star hotels. Designed to give residents an experience that is reflective of Chelsea Barrack’s prestigious status as a neighbourhood, it radiates elegance and sophistication, with a 24-hour concierge always ready to offer service. Inside, the Garrison Club features a 12,700 sq. ft private spa, a 20 metre swimming pool, a steam room and sauna, business suite, cinema, resident lounge, board rooms, private function room and a games room.

Hot on the heels of the opening of The Garrison Club and the first Chelsea Barracks residence is another landmark occasion for the development; November saw the first new artwork installed on site, as part of the neighbourhood’s ambitious programme of public art commissions. Reflecting on the rich, botanical history of Belgravia, distinguished artist Conrad Shawcross RA has created a major new public sculpture for Chelsea Barracks, titled ‘Bicameral’.

With 693 component parts and standing at eight metres tall, ‘Bicameral’ was made using anodised aluminium – but entirely without welding. Instead, Shawcross has used techniques drawn from Japanese wood joinery to create the artwork’s unique structure. A progression of bifurcating and trifurcating elements, the sculpture fans out from a stem loosely forming two hemispheres or sides; visitors to Chelsea Barracks will find ‘Bicameral’ on Dove Place, adjacent to the recently opened Whistler Square.

“The name Bicameral came from ‘The Origin of Consciousness in the Breakdown of the Bicameral Mind’, by Julian Jaynes; Jaynes’s book theorises that consciousness evolved out of the use of language, particularly metaphors,” Shawcross explains. “The work is in some ways an Arcadian symbol for reason, humanity, rationalism, progress, whilst the abstract modular structure oscillates between recognisable natural systems such as neural pathways, a set of lungs, or even a schematised tree itself, but in the end it remains elusive to definition.”