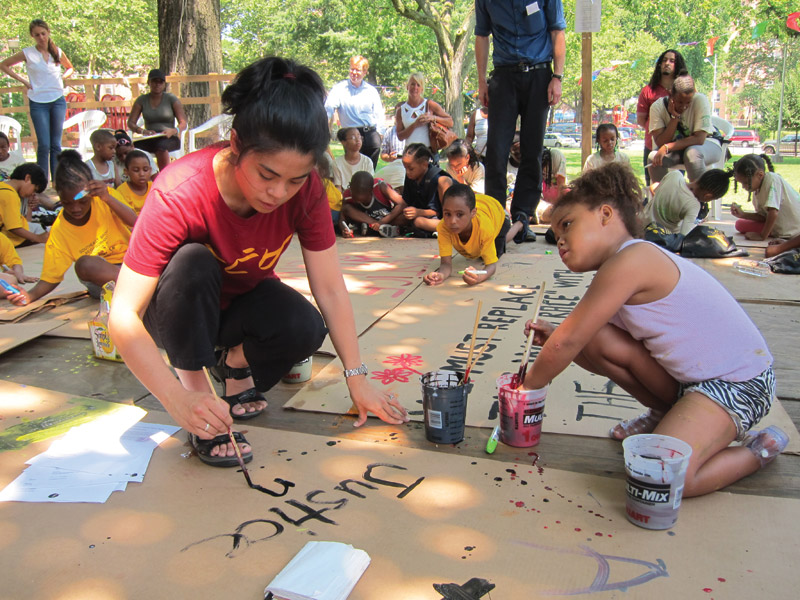 Veronica Simpson has been to Oslo, where she witnessed a different kind of public art.

Forgive me if I talk about art and regeneration – again. Last month, I was pondering in this column how the biannual programming of a fortnight of cool, arty films, photographs and pop-up museums in the Thames Estuary’s remotest parts could make much difference to its culture, its economy or its overall appeal as a destination.

This month, I’m still processing the fruits of a trip to Oslo to hear people talk about a very different kind of approach to a public art festival: one that could really permeate and leave a lasting impression on a place and a community; transforming ideas about who they are and what they are capable of.

The Norwegian art scene is a well-funded one, with an emphasis on supporting artists, promoting art education and access to art via grants, foundations and public institutions.

So, it’s perhaps unsurprising that what they have decided to do, with a proposed Oslo art biennial, is offer a completely different take on the genre. One of the duo appointed to curate this initiative, Per Gunnar Eeg Tverbakk, told me: ‘We think that there’s no point in making just another biannual. We see this as an opportunity to create another way of thinking about what art in public space can be.’

To this end, Eeg Tverbakk and his co-curator Eva Gonzalez-Sancho have spent the past two years researching, questioning and clarifying how a biennial could be programmed in a way that would be different and better, under the guise of the Oslo Pilot.

The results of that research were offered at the aforementioned symposium in November. Invited to present work and provoke conversations at this three-day conference were four artists creating the kind of art that Eeg Tverbakk and Gonzalez-Sancho are talking about: Thomas Hirschhorn, Mette Edvardsen, Dora Garcia and Rahraw Omarzad.

The big star in terms of art world profile was Thomas Hirschhorn. The Swiss-born, Paris-based artist was there to talk about his Gramsci Monument – a collaborative, participatory event and community space he set up over 10 weeks in the Bronx, in the middle of one of its social housing projects, during the summer of 2013. The fourth of his ‘monument’ series, dedicated to his favourite philosophers, the Gramsci Monument is underpinned by Antonio Gramsci’s principle that ‘everyone is an intellectual’, which chimes with Hirschhorn’s belief that every person has an innate understanding of art – if only they can be encouraged to engage with it. Having found two friendly and amenable social workers based in the Forest House estate, Hirschhorn basically set up camp there for months.

He talked with people about what they might like or need, found project managers and contributors, and a team of 15 residents who were paid to construct what he had in mind: a community centre with a Gramsci library, a children’s drop-in/art space, a gallery and a bar that served freshly made food all day. Over six weeks, the building went up, made from recycled wooden palettes. And then every day of the completed monument’s existence Hirschhorn and his crew put on events and activities, from a daily newspaper and a free radio station to lectures on art and philosophy. Everyone was invited.

And at the end of that time, the monument was dismantled – Hirschhorn’s intention is that each monument will exist ‘with the will to create an eternity, but with the intensity of the moment’.

One of the most powerful gestures of this Oslo symposium was the inclusion of the participants on the speaker’s podium and in workshops through the day: nine people had been flown over from the Bronx crew and Hirschhorn’s American team, including Erik Farmer, a man who lived and worked in Forest House, and who initially thought the project would never get off the ground. Then he saw Hirschhorn in action: ‘He wasn’t going to let nobody stop him from doing what he wanted to do. From that point, I wanted to jump right in.’

The results of the experiment, from Farmer’s point of view, were many and varied but one of the most profound was that the black and Hispanic elements of the community – who previously stayed well apart – started talking to each other. He was also sceptical that anyone would spend time in the Gramsci library. ‘Most of them are not really readers, but I was surprised. The library stayed full of people.’ And Farmer too became a fan of Gramsci, surprised ‘that someone could go through what he did and not be broken, because he believed in something.’

Farmer concluded: ‘I understood a monument being something stable – that doesn’t move. But now I see it’s more important to me than a sculpture or something like that, because it’s embedded in my mind. When I walk past where the monument was, I think about it. It never fails. It has a lasting memory.’ One of the 'live' books reads to a listener in a library, at one of Mette Edvardsen's performances of Time Has Fallen Asleep in the Afternoon Sunshine

Not every artist has the backing that Hirschhorn did – the Dia Foundation played a vital role in reassuring the authorities and funding the work throughout its evolution.

But there were low-budget but equally profound, and far more portable works, such as Edvardsen’s ‘Time has fallen asleep in the afternoon sunshine’. A work inspired by Ray Bradbury’s book Fahrenheit 451 anticipating a world where books are banned and people are discouraged from learning or remembering anything (all they need is supplied by an electronic portal – sounds familiar?). Edvardsen – a dancer and choreographer – was struck by the way our brains are apparently evolving: we can only process as much information as we now have available via laptops and smartphones by forgetting large chunks of it. As she says: ‘If forgetting is important, then so is remembering.’

To that end she devised a work where some six people would memorise a book to become a ‘living library’. This ‘library’ would be offered at libraries, in parks and community centres. The reader would choose a book, and then have half an hour to be told the story. Wherever the work has been requested – all over the world since Edvardsen first realised it in 2010 – new ‘living books’ have volunteered to memorise a classic or beloved work relevant to their region, and so the library has grown. The act of remembering is honoured in every performance. And the experience is apparently as profound for the ‘living books’ as it is for the listener.

A vital element in the power of these works is the generosity of the artists. They take authorship of the idea, but they are also happy for every participant to feel equally an ‘author’ of the experience. Now, that’s what I call legacy.