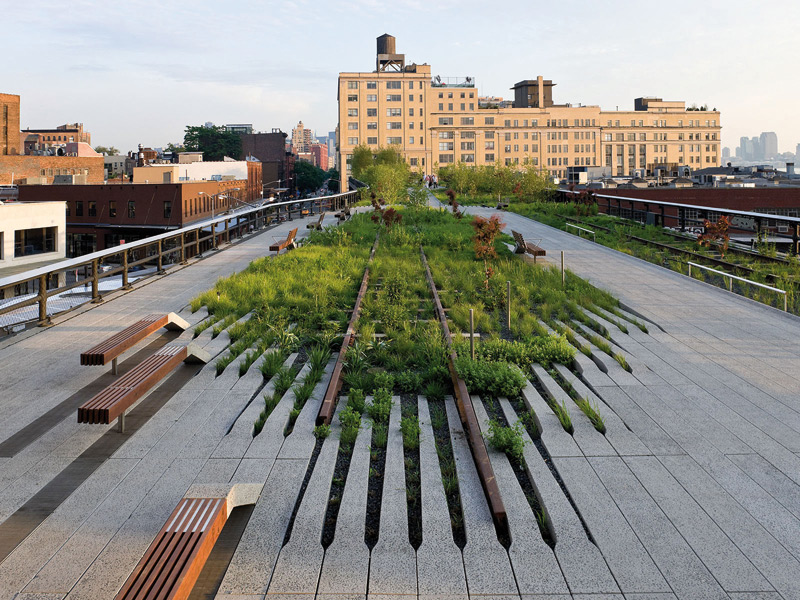 Celebrating the launch of Phaidon’s The High Line book - also designed by Diller Scofidio + Renfro - Blueprint brought Liz Diller and Ric Scofidio together at London’s Architectural Association to discuss this most vaunted of public-realm, urban regeneration projects of the 21st century

The 20/20 seminar series asks leading architects and designers to reassess a key project from their careers with the benefit of hindsight. Blueprint editor Johnny Tucker opened the evening, before handing over to Diller for a presentation and AA director Brett Steele, who conducted the conversation. At the end of the evening Johnny Tucker presented Diller and Scofidio with the Blueprint Award for Best Privately Funded Public Project, which they won in October, for their project The Broad, in Los Angeles.

Liz Diller: When we got up on the High Line for the first time in 2003 it was kind of derelict, but extremely intriguing and illicit too. It was half abandoned and amid a sea of parking lots. The only way to get there was through somebody's window and then tear your way through some barricades.

The High Line was built in the middle of the Depression [in the Thirties], 10m in the air, to replace a train on the ground that typically ran people over and was actually escorted by hired men on horseback to avoid collisions with pedestrians. In 1980 the High Line became abandoned. Though now hugely popular the High Line faced a lot of opposition in the early days. Photo: Iwan Baan

The Friends of the High Line were two very young guys, Joshua David and Robert Hammond, who found each other at a community meeting and decided that they wanted to save the High Line and transform it into a park. They used Central Park as an example, in the way that a park could produce a lot of urban change and help in the development of Manhattan. But it was a hard sell. There was a lot of controversy to this idea of making the High Line into a park and the developers or property owners didn't really want it. These two guys were very inspiring - they were only in their 20s at the time and they didn't really have the political tools to save the High Line. They figured the first thing they had to do was brand it, so they hired a graphic designer to create a logo, and from that logo they were able to send letters to the local government and opposition. Ric Scofidio: It was a truly serendipitous moment that these two didn't know each other and happened to sit next to each other at a community board meeting. If that had not happened we probably would not have the High Line.

LD: When we were asked to participate in a competition, we said you can't just bring the public up there and have the plants shoved over to one side, you really have to pick up on the way that nature overcomes culture and this great cycle of urban decay and rebirth that happens. That was the trigger. One of the most beautiful things about what we found up there were these micro environments, depending on where it was: sun-drenched or wind-swept or shady because there were towers there; different things grew there and we wanted to hold on to that. RS: It actually had to do with the architectural massing adjacent to it, so the architecture of the city in a way produced the plants that became the High Line.

LD: That biodiversity was our calling card and it became a three-way collaboration with James Corner's landscape architecture firm Field Operations, and Piet Oudolf. We picked up on what was originally there and took it further. We developed a paving system that comes together with the landscape elements; the idea was that the public would meander through and there wouldn't be a particular path. At the same time we thought about a human biodiversity too, that we would plant some seeds for things that one can do, and the neighbourhood could transform around it. A lot of things that were done here were never done before. The Promenade Plantée in Paris was a predecessor, but a New York City park up in the air was inconceivable.

Basically, you can't do much on the High Line: you can walk and you can sit, you can't play ball, you can't bring your dog, you can't ride a bike; it goes into this theory that New Yorkers really have rediscovered the idea of doing nothing. Typically, if you're not working or burning calories at the gym, you're on your devices or doing something productive, but this is a place where it's OK not to do anything, it's sanctioned. For us,this was an urban Zen or something like that. The idea was to create a sense of urban Zen, helped by moments of theatre. Photo: Iwan Baan

RS: Most people thought of the High Line as this big black lump of steel in between buildings, and that's why most developers wanted it torn down. Now, when you look up you see greenery and trees, there is a connection both down to the city and from the city back up to the High Line. It's that umbilical cord of that moment that's important. Soon the derelict lots around the space began to be developed. The warehouses on the right of the High Line in this image have now been replaced by the New Whitney Musuem. Photo: Iwan Baan

LD: There were things that we intended to do, but then there's stuff that happens and sometimes it's good and sometimes not. The High Line somehow got into pop culture, it was in Family Guy, the Simpsons, a Dare Devil comic, there was even a perfume named after the High Line that advertised itself as the smell of urban renewal! People have weddings there, it's the most Instagrammed place, and all sorts of things that we did not anticipate. The cost of properties next to it just started to rocket; it happened much faster than anyone could have predicted. The sea of parking lots is now getting filled up with glass towers.

Another thing that happened, which we didn't predict, was that it spawned what has been called the High Line effect. There are something like 60 High Line-inspired projects across the world that have transformed highways, bridges and railways. They even created a High Line in Disney World, Orlando... Brett Steele: One thing which is striking is two of you doing this as New Yorkers in New York. In a way, the project is as much a record of what has happened in New York as any other project or proposal one can imagine. The abrupt southern end of the High Line with the Standard Hotel straddling it - the last building allowed to be built over the park. Photo: Iwan Baan

LD: If you had ever asked me when I left school would we be doing what we did, I would never have imagined because typically architects are not appreciated in their own home towns until they succeed elsewhere. We were really very lucky to hit upon these two projects - the Lincoln Center and the High Line - just around the same time.

RS: I think one of the important things is when Liz and I started working we never said one day we will be a big office. We really just explored what was of great interest to us and pushed each project beyond normal limits.

LD: When we got there we found this post-industrial place that was extremely melancholic and we wanted to somehow hold on to this past. No one knew what was going to come next. The High Line helped produce a very different kind of city, where the nostalgia of the past is shared with an apprehension about a future that might be very alienating. What we wanted to do was capture this moment, this place of the in-between; it's something that embraces change as well.

RS: Thinking the unthinkable made many people think that it was so unthinkable it wouldn't happen, and therefore in a way it gave us more freedom to explore and push.

LD: To students who are sceptical about what architects can achieve and how you do it - this was a grass-roots effort started by two young people. It took a long time but they did it. It was totally unthinkable; the notion of actually saving the High Line was kind of preposterous, nobody expected it to happen. There was an ideas competition, there was a proposal for a long swimming pool and all sorts of goofy things. It wasn't until they came up with the idea of a park that it started to become plausible.

RS: The week before it opened, and much of the time during the design process, we wondered if anyone would go to a park 10m up in the air. Would it be successful? We decided that if we had 300,000 people a year visiting it would be a great success. We did not expect the results we had! It's open come rain or shine, or snow...

LD: Last year there were six million visitors to the High Line. This is something that we had mixed feelings about, of course, and a lot of New Yorkers have said this is no longer for us, this is for tourists.

BS: We're at effectively 10 years after you started the project, and it's going to go on for another 10 years, and maybe one way to deal with the uncertainty is to see it as a chapter in something larger?

LD: I can't help but think we touched a nerve, and that just happens by chance and not very often. Bilbao touched a nerve because, all of a sudden, architecture was thought to have value for the economy of a city, for better or worse. For the High Line, I think it has to do with a couple of things: one, a world that is thinking more sustainably - rather than knocking down our structures let's think about perhaps repurposing them - and secondly, there is a consciousness of public space as land becomes more privatised in cities.

I think a lot of people saw how the High Line transformed economically that part of Manhattan, which was really very rundown. Some of us have a romance for that, but in the end it did what the promise was, which was a catalysed development in the area, and maybe too quickly. RS: It is very complex. The reason the High Line works so well is because it's embedded in the architecture of the city, you understand your place in the city.

The city and the buildings around it are so important to its success and critical to the experience. But my hope is that we will begin to see that abandoned infrastructure can have another life.

LD: I hope that people will see the High Line as a reference for the more successful adaptation of infrastructure. The beauty of the High Line is not the High Line, it's what's around it and the fact that you're looking in this kind of seemingly unauthorised way; these are not fronts of things, these are party walls, smoke stacks and fire escapes, forlorn and forgotten places. It's not trying to be beautiful, it's just there. 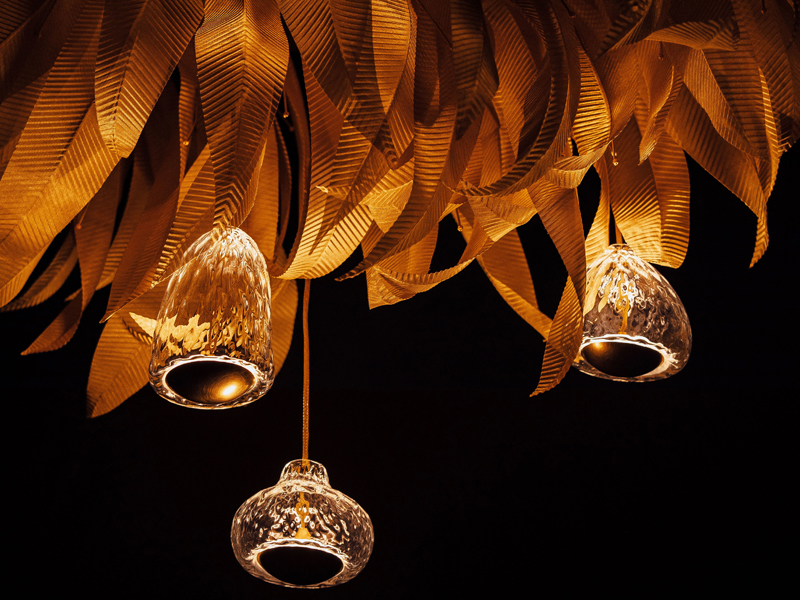