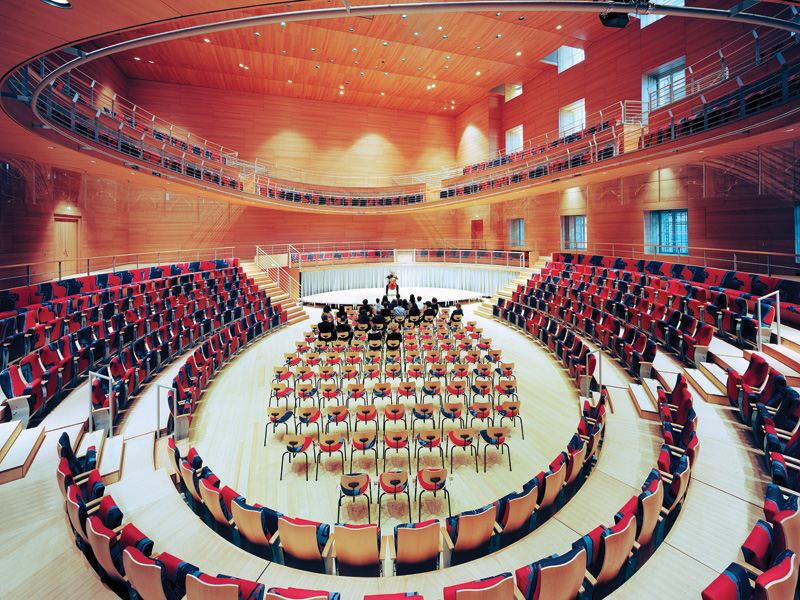 The world is used to seeing Frank Gehry’s architectural originality in his wrapping of buildings, but all this has changed for the Pierre Boulez Saal, the auditorium of the Barenboim-Said Music Academy in Berlin. Restricted by a not-to-be-altered classical shell, Gehry has instead taken his wrapping inside

Frank Gehry is living proof that an 88-year-old architect can learn new tricks. In Berlin, the Los Angeles architect has just completed the Pierre Boulez Saal, and his design for the 683-seat recital hall implicitly critiques his long-standing design process, unexpectedly establishing a new methodology for himself as well as a new paradigm for concert-hall design.

Gehry’s originality in architecture was to conceive and study buildings from the outside after blocking out their general massing inside. The plan was not the generator. With the massing established, Gehry sought emotional expression and located it primarily in the facade. In his most famous ‘wrapper’ buildings — the Bilbao Guggenheim, the Louis Vuitton Foundation and, to a certain extent, the Walt Disney Concert Hall — he gift-wrapped boxes, sculpting buildings from the outside, famously streaming ribbons and sails around three-dimensional configurations of cubes sized and organised per the brief. Interiors are planned, organised and ‘spaced’ but not designed, left largely to an orthogonal logic divorced from the masterful formal composition of the outside. The new Barenboim-Said Academy is located in a classical structure rebuilt after the Second World War, and recently restored and adapted by German architect HG Merz. The Pierre Boulez Saal is located in the far wing

The Pierre Boulez Saal — the auditorium of the Barenboim-Said Music Academy — is different. Gehry was given a historically designated, Fifties’ classical shell that could not be altered, within which he would insert a medium-size concert hall. The building, off of Berlin’s central cultural artery, Unter den Linden, was basically a dressed-up warehouse used as a storage depot for sets for the nearby Berlin State Opera.

Forced to work only on the inside, Gehry revised his usual design tactics and wrapped the four interior walls of the recital hall, revealing what we have missed all this time in those projects where he could not persuade the computer, the budget, or his hand-built models to breach the blood-brain barrier separating outside and inside. In the Pierre Boulez Saal he inserted two ellipses, upper and lower, looping within the four-storey rectangular shell: the balcony rolls through space with the curves of a velodrome and the undulating profile of a saddle. But thinking of the design only as a Möbius strip-like ribbon revolving continuously inside an acoustically resonant wood case panelled in Douglas fir is deceptive. What was new for Gehry is that the sketches that usually initiate his form-finding were plan views rather than elevation studies. He horizontalised his usual elevation sketches, laying his energy drawing on the floor rather than against the facade. He floored his elevations. Now the plan was the generator, achieved through Gehry’s free-hand gestural drawing rather than as a consequence of programme massing.

The Pierre Boulez Saal occupies the right wing of the original, symmetrical, centred structure, which houses the Academy. Young musicians from the Middle East, North Africa and other regions study music and humanities at the Academy in a spirit of cooperation crossing the Jewish-Arabic divide. The main floor is designed with flexible seating in mind, to support different musical programmes. It can be adapted into several configurations, including the traditional orientation of an audience facing towards the stage

Headed by Daniel Barenboim, the Berlin-based Argentine-Israeli conductor and pianist, the Academy draws from the example of the Seville-based West-Eastern Divan Orchestra that Barenboim and Edward Said, the American-Palestinian literary scholar, started in Weimar, Germany in 1999. Israeli Jews and Arabs from the Middle East play side by side in the Divan orchestra, proving that both groups of youth can work together in comity given a supportive environment equitably open to each.

Some of the friendships among the four go back decades, and some are more recent. ‘I knew Boulez first,’ remembers Gehry. ‘I met him at the rug concerts at the Phil in New York, with the audience sitting on small rugs on both sides of the stage and the orchestra in the centre. He epitomised minimalism. He barely moved. Just his arms, but not outside his chest. I was mesmerised. He was not only a minimalist, but he had passion. I introduced myself.’ What these major cultural figures shared besides a mutual respect and trust was a desire to use the arts to bring together young people who were not raised to cooperate. Given a context without endemic hostility, the students have been able to work together, speaking their shared language: music. ‘I happened to read in the newspaper about the Divan orchestra, and the idea that arts could bring people together to play was very enticing,’ said Gehry. ‘The mission of the Abu Dhabi Guggenheim is the same, to bring the peoples of the Middle East and the world together in a building.’

The plan sketch that Gehry first presented to Barenboim was a whirlpool of ovals within the tight confines of the boxy shell. Later Gehry worked up more conventional schemes as a starting point of discussion, including the standard proscenium arrangement with the stage at the head of the hall. ‘What happened to that beautiful sketch?’ Gehry remembers Barenboim asking. The disappointed Barenboim, a champion of experimental music and contemporary culture, wanted to work with the elliptical scheme Gehry originally drew.

‘That sketch implied that there were no stage risers for the orchestra, that everything was done in the flat. But he didn’t care about stage risers — he wanted to experiment,’ recalls Gehry. Like Boulez, Barenboim was trusting and encouraged his — and Gehry’s — more radical impulses.

With project designer Craig Webb, Gehry distilled the first sketch into two ellipses of seating, one atop the other, each with a separate axis turned off the axis of the shell. The computer allowed him to torque the ellipses into what look like compound curves. The turns initiated a rotational movement around a void at the centre, where the musicians would play at the base of a bowl virtually inscribed within the box. The four-story entry shared by the Barenboim-Said Academy and the Pierre Boulez Saal, designed by HG Merz, which designed the interior of the Academy itself and restored the shell of the building

Theatre-goers have long been familiar with centre-stage theatres, but a centre-stage concert hall is acoustically problematic since at least some instruments, such as the brass, project sound forward. But most instruments — strings, winds, reeds, drums and even the piano, with the lid off — project sound omnidirectionally. Centring the musicians, then, was not antithetical to acoustics, especially when the renowned acoustician, Yasuhisa Toyota, made a special effort to blend the sound into a room-wide, 360-degree stereophonic totality.

Acousticians generally favour boxes, but to help mix the sound within a box centred on a stage with a ringing balcony, Toyota required that the upper ellipse, a balcony two rows deep, detach from the perimeter walls. Sound would rise from the ground level up the back walls, past the upper tier to bounce off the wood-panelled walls and ceiling and re-enter the hall from above, spilling into the centre. A countervailing mushroom of sound would rise up the middle of the room through the upper elliptical ring and ricochet off the ceiling down past the back of the balcony to the first level. The room mixes the sound three-dimensionally in a churning motion. ‘In some seats, like the one where the German president sat for the opening concert, you get sound from two directions,’ says Gehry. The configuration marks a daring advance into uncharted acoustic territory. At the inaugural concert, Barenboim put the hall through its paces, from the most fragile sounds to the most thunderous, testing and proving the space. Barenboim put into play Boulez’s concept of the Salle Modulable, differently reconfiguring orchestral positions and rooms for the demands of each piece to enhance the sound and engage the audience. Boulez believed a concert hall should not be limiting, that it should perform as a machine, changing and moving, acting as one of the variables to which musicians respond. Room and musician should interact.

‘Pierre had a big problem with how to make his pieces work on a standard concert stage when you had to move xylophones, kettle drums and pianos in and around almost in the middle of a piece,’ says Gehry. ‘How to change things. He was very concerned about how a stage door lets you bring a piano on stage.’ On the opening night, Barenboim, a ferocious conductor, chose music ranging from Mozart to the 12-tone pieces by Austrian Romantic Alban Berg. The instrumental range included everything from a solo clarinet to a musically complex, interwoven, orchestral tour de force by Boulez — sur Incises — played by three harps, three pianos and a complement of percussion. Unlike long shoebox halls, which distance the audience from the orchestra and the music itself, Gehry’s ellipses pressed the audience close to the orchestra into an interactive intimacy.

With his coiled energy, Barenboim uncorked the music. Sur Incises swept the hall like a tornado of sound in an unforgettably immersive experience of percussive rhythms. The audience was not simply inside the hall, but just feet away from the musicians, as though inside the orchestra and the music. The music hit the audience with an almost physical impact. Following Boulez’s principles, Barenboim, Gehry and Toyota have succeeded in an interdisciplinary collaboration that supported pieces by composers as different as Berg and Mozart, Boulez and Schubert in the inaugural concert. The acoustics were ecumenical, and space held the audience in the music’s grip.

Goethe memorably said that architecture is frozen music, but at the turn of the 19th century Goethe could hardly anticipate frozen music of deliberate asymmetry and explosive energy. Once described as an architect who invented his own 12-tone scale, Gehry’s off-centred, revolving, asymmetrical design provided a provocative, reciprocating context for the musical asymmetries, dissonances and propelling rhythms of pieces by Berg and Boulez. Its visual quiet, warmed by the rich, honey-coloured wood, supported the Mozart and Schubert equally well. ‘Architecture and music are alike, dedicated to transmitting feeling through space,’ says Gehry.

In the interactive collaboration of architecture and music, each activated the other in a heightened and seamless experience of fused disciplines that establishes a new centripetal paradigm for concert-hall design. 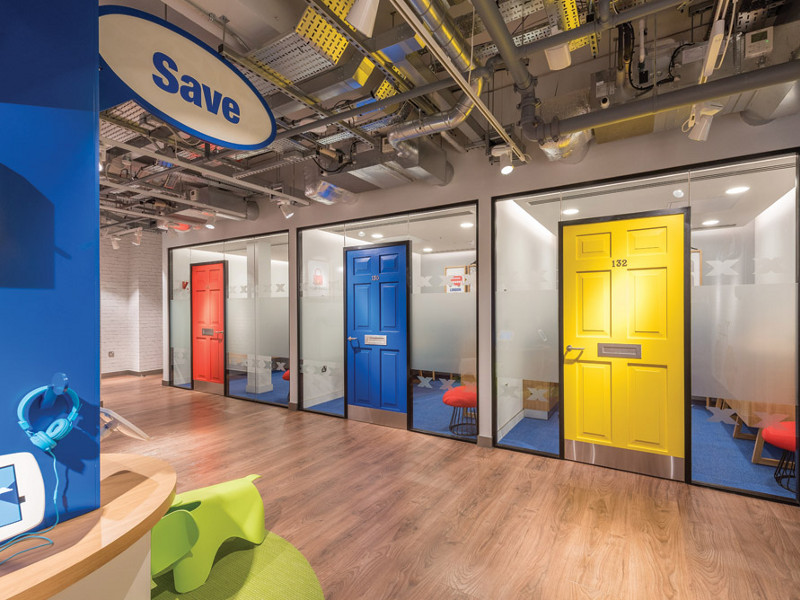