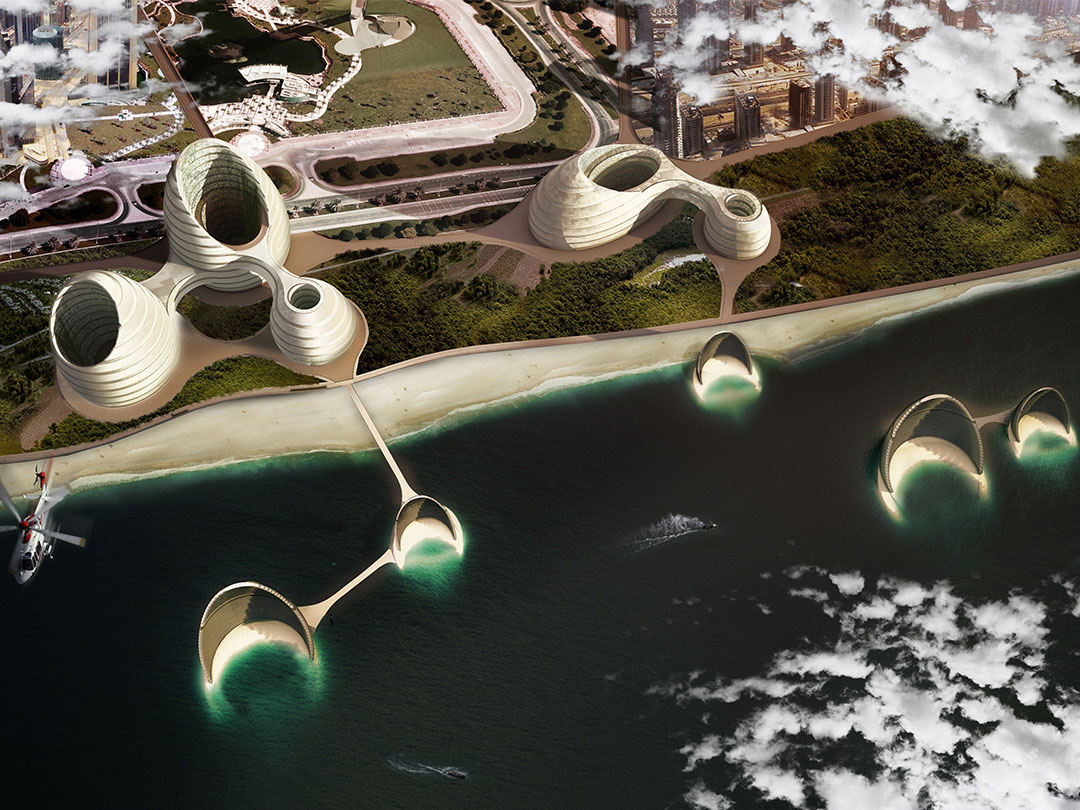 Based on an innovative project from Luca Curci Architects the group works with three futuristic concepts - organic, vertical and desert cities - to support a forward-thinking, sustainable way of living.

The buildings, mirroring the looks of giant beehives, are designed to support our current lifestyle where people can live, work, socialise, learn and create cultures.

In part one we examine the concept of organic cities, which has been broken into two groups: organic buildings on earth and 'moons' on the sea. To ensure a fluid community all structures are connected via roads, parks and running streets.

The masterplan ensures that all aspects of a successful living space have been addressed; however the architects have designed the project to be tailored to various building environments. This particular design is for the Persian Gulf. There are varied sizes of each structure to account for their uses and the moons on the sea are broken into three categories. The largest moons at 190m high host residences, hotels and private apartments; the middle moons, 115m high, feature hotels that are reachable by sea, air, and by road; and the smallest, 90m high, are private residences with the luxury of private access from only sea and air. On land it is the same concept, with the tallest building at 470m, and the others descending in height.

The entire floor area will be able to host 150,000 inhabitants and involves dedicating 50% of the area to commune spaces including green areas, connections, open areas and common grounds. It is clear Luca Curci Architects has considered the needs of our future communities. However, with spaces devoted to such luxuries, how will a percentage of these inhabitants be able to afford living in structures like the ones accessible only by air and sea? According to the Curci, it's simply a different way to build cities and, as with many projects, it's necessary to invest in a more promising future. In this case, investing money in the initial stages is anticipated to save much more money further down the track, predicts Curci.

'More comfort and [a] better life, it's affordable, according to me. Isn't it?' said Curci. Moving forward, more than 800,000sq m will be assigned to hotels, spas, wellness areas; 6,300,000 sq m to shopping malls, galleries and museums; and 450,000 sq m to offices and other social services. These numbers may look high however when put in perspective; 463,515 sq m (five million square feet) is the amount of retail space on Oxford Street in London alone. Stay tuned for parts two and three of our future cities.

Continue reading for more images from the future cities projects.