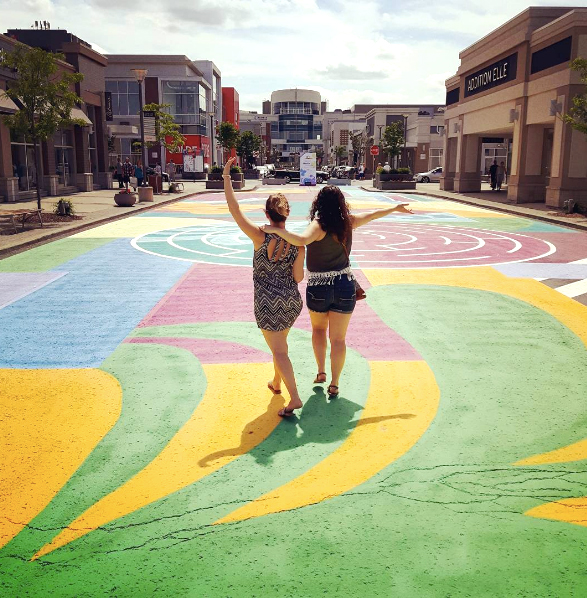 An urban oasis has been created just outside Montreal and it is the biggest and brightest mural that we have seen in a long time. On the cusp of the American border and less than ten minutes from Montreal lies the Quartier DIX30 district in Brossard. This is the area where Projekroom decided to install its giant graphic art canvas entitled, ‘Urban Oasis.’

Collaborating with the Quartier DIX30 district, Projekroom, an open platform composed of artists, creatives, and communicators, have created a massive temporary installation which acts as an open pedestrian area for gathering, wandering and activity participation. Catherine Juneau, a spokesperson for Projekroom said: “The Urban Oasis embraces the idea of streets as vectors of celebration, creativity and togetherness, essential elements in building a sentiment of belonging to our environment.” The bold and beautiful mural is designed to bring people together; as such it has been painted to include a colourful basketball court, hopscotch, a maze and a giant game of checkers. People walking past can get involved in a game, families can challenge each other and friends can meet at the mural to hang out. The installation is a culmination of community spirit, children play on a playground designed by urban artist Waxhead, while parents lounge on furniture crafted out of recycled materials contributed by local merchants.

“Throughout the six month period of preparation, it was a thrilling experience to see all active departments of the Quartier DIX30 district, from marketing and leasing to maintenance and security become more and more involved and enthusiastic about the project, taking part personally in the completion and enhancement of its features,” Juneau explains.

Visitors can make the most of this beautiful installation until October 2017. Guests visiting before 26 August can enjoy performances by contemporary artists as part of the Musical Odyssey on the Oasis' stage.  The stage offers over 30 performances from acts all over the world.