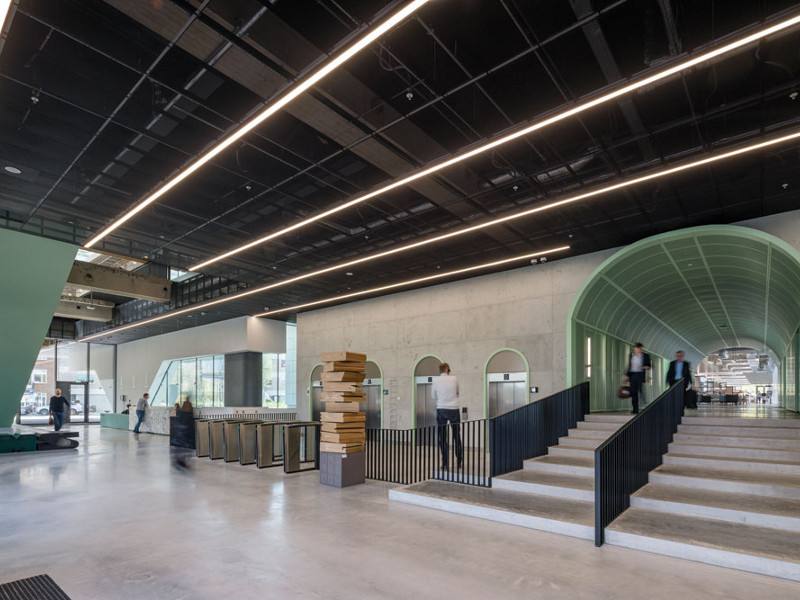 A 1970s office block has been transformed into an open, inviting and collaborative 21st century space by BDG architecture + design, to unite 15 WPP agencies under one roof as part of its global co-location strategy.

BDG Architecture + Design is leading the global co-location project for WPP, the world’s largest communications services group, employing 140,000 people globally across the EMEA, US and Latin America regions. The Amsterdam building has recently been completed by BDG, itself a subsidiary of WPP, transforming a 1970s office block into a collaborative new space for WPP and its clients. The building was, for a while, Europe’s largest office block, the scale of its ambition reflected by its sheer size (2,000 workplaces across 27,000 sq m) and idiosyncratic design (eight floors of irregularly stacked blocks, covered in bright, white mosaic tiles). Bold and modernist, it was built in 1973 by Huig (Hugh) Maaskant, a Dutch architect largely known for his role in the post-war reconstruction of the Netherlands, and was supposed to be the heart of a new business district for Amsterdam. By the time it was purchased in 2013/2014 by property investor and developer Vastint Netherlands, the building had been largely vacant, and felt divorced from its predominantly residential surrounds. Turning it into a 21st century office – open, collaborative, and integrated with the city – was one of the key challenges facing BDG. The reception desk features the logo detail ‘Amsteldok’ on the side, and ‘A WPP Campus’ on the front

Formally known as Riverstaete and rebranded as Amsteldok, the new name is the essence of what the project hopes to achieve: the first part, ‘Amstel’, takes its name from the river, and ‘dok’ means coming together in Dutch. BDG’s take on the latter is to give 40% of space over to communal areas. The office is one of a series of new co-locations, uniting WPP’s brands behind a simplified front for its clients. The first new campus completed was in Lisbon, followed by Amsterdam, then Madrid, while BDG is currently designing offices in Milan, Warsaw, Paris, Prague, Dusseldorf, London, Detroit, San Francisco, Toronto, Buenos Aires, Santiago and São Paulo. The strategy is consistent across the sites, but each one is individualised by the buildings’ histories – for example, although typically in an urban location in need of regeneration, the French site is an old Citroen factory while the campus in Lisbon is situated in a modernist garage building. The old Riverstaete building was picked in 2016 as the Amsterdam site to co-locate 15 WPP brands from 11 separate locations. A previous renovation of the shell by architects MVSA had already helped the relationship between the building and its surrounds, breaking the facades and replacing the smaller band of windows that horizontally bisected each of the floors with floor-to-ceiling glass. It is now more open and light, and although the original tiles have been lost, the new tenants gain uninterrupted views from the new windows. Further fluidity between inside and out is provided by roof terraces installed on the various levels of the building’s staggered silhouette – these, chief creative officer Colin Macgadie comments, ‘provide great views across the city from every corner of the building, which does provide a real wow factor for all’. Level nine is a flexible shared area with a bar and events space – BDG used high-end finishes that make it appropriate for entertaining clients, while the materials are sufficiently robust to withstand daily tenant use for exercise classes and company events.

BDG has created an open and flowing plan, aligned on a sparse structural grid, with large openings and cut-outs between floors. While still offering 1,500 workspaces, significant areas are now communal. A cafe and restaurant has been installed in the spacious reception area, and a large staircase adjacent leads up to a first-floor area dedicated to meeting and co-working with clients. The design language unites the spaces and brands, while the materials take their lead from the building, as Macgadie explains: ‘Materials should respect and complement the architectural fabric of the buildings we inherit.’ The resulting palette is pared back. It varies in texture, but surfaces aren’t busy – you might see carpet that seems tonally similar to the concrete, or perhaps an area where diagonally panelled wood continues from floor to wall. Macgadie explains that BDG’s choice of material applications ‘indicate a use or define a quality that we want the end user to instinctively pick up on and help determine behaviour’. Patterned tiles signify breakout areas, but these still retain a consistency of atmosphere felt elsewhere. While the interiors are meant to be ‘nimble’, ready for future developments, the 15 WPP companies benefit from BDG’s collaborations with VBAT in Amsterdam (branding and identity) and Acrylicize in London (bespoke artwork design fabrication) ‘to integrate brand expression and experience throughout the building at both a campus level and an individual business level’. Macgadie describes it as ‘a programme developed across multiple campus projects that provides a canvas for a whole host of touchpoints, from large immersive environments down to simple wayfinding and graphics’. The building has a staggered form

He adds that ‘we are very keen as a studio to deliver environments that look “natural”, that feel as though they belong’. The riverside monolith has certainly been transformed to better fit its purpose and site, and will hopefully fulfill its long-held potential.