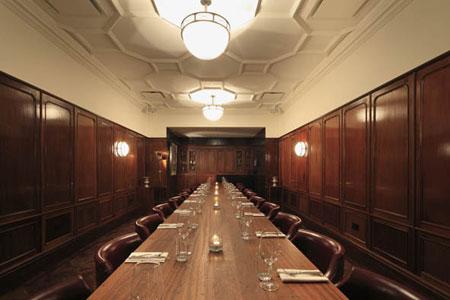 Forget about Meat Free Monday and Hugh's veggie summer, London steakhouse Hawksmoor is putting meat back on the menu. Owners Will Beckett and Huw Gott recently opened their third restaurant at London's Guildhall, serving classics such as surf and turf in an equally classic interior by design and architecture practice Macaulay Sinclair.

The London practice also designed Hawksmoor's first restaurant at Seven Dials in Covent Garden whose solid wooden doors, parquet floors and reclaimed laboratory table tops have been popular with restaurant critics and diners alike; but as lead designer Mike Sinclair says, the latest branch has a more refined interior in keeping with its location.

We want Hawksmoor Guildhall to evoke an authentic sense of dining in an established, revered restaurant set within a[n]... institutional London Hotel,' explains Sinclair, whose practice chose a palette of 'tactile, natural materials' including solid mahogany. But the new restaurant also has reclaimed materials including wall panels made from old museum cupboards sourced from the Natural History Museum.

The bar front is made of wood scavenged from a bank in the Netherlands, while the main restaurant floor is reclaimed parquet.

More reclaimed school laboratory tables create a visual link between Hawksmoor Guildhall and its sister at Seven Dials while the same pattern of wallpaper that was used on the luxury cabins of the Titanic and bronze 1930's fan lights hark back to a more elegant and sophisticated time. 'We want the space to kindle and communicate the unique culture and heritage of London's financial district at the latter part of the 19th Century and for diners, in some small way, to be transported back there,' says Sinclair.