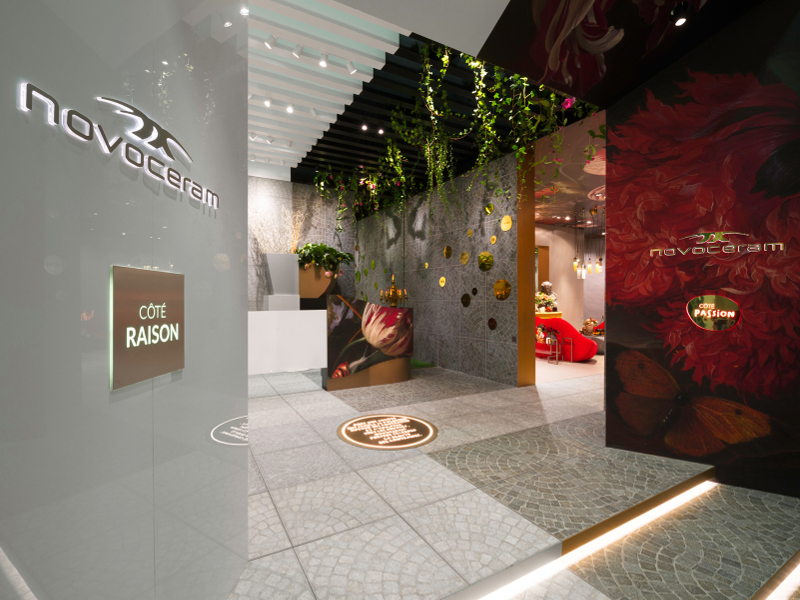 How were you commissioned?:
I have been working with Novoceram, the oldest French ceramic manufacturer, since 2004 and in all these years I have developed a large number and variety of projects for the brand, and a stronger complicity that makes each project as a new chapter of a consistent and uninterrupted story that we are building together with the company. What was the brief from the client and how much were they involved?:
The unusual and peculiar nature of my double role with Novoceram (interior designer of all the spaces of the brand but also Marketing and Communication Manager within the company) has made the process very fluid but at the same time intellectually rich, thanks to the strong involvement of the company at all its levels, from the Marketing Department to the Managing Director and President. The strong concept of the Antipodes project was to take inspiration from the current mood of opposition and contrast that we often experience nowadays in the first world, especially on social networks, and to propose another vision, based on the beauty of the opposites, and the possibility to turn differences into a treasure full of opportunities to take advantage of. The concept was built together with the entire staff of the Marketing Department sharing the idea that the booth I was ready to design should be capable to speak on two different levels: a first level, purely aesthetic, with a surprising look cut into two opposite halves, capable to interact with the immediate emotions of the visitors, but also a deeper level that includes a conscious message that was explained at the entrance of the booth and that could be read in every detail of the set design. That was the real sense of the project, but each visitor was free to grab it or not, as this voluntary effort was not necessary to take pleasure in the experience inside and outside the booth. How did the brief affect the materials and design choices?:
The Antipodes booth was mainly a big showcase for the new ceramic collections launched by Novoceram at Cersaie, so the main goal was to show the tiles at their best. In fact, the booth does not simply expose the product, but in this case it is entirely made of the product itself, wrapped in tiles in almost every horizontal and vertical surfaces. In addition to ceramics, I made a large use of wallpaper with HD impressions, as the message of the beauty of the contraries was helped by a bold visual of human faces and ancient painting of flowers. How did your previous experience help you with this project?:
I believe that every project is the result of everything we have done before. I’m not talking about the obvious fact that it’s the output of our professional experience, but I mean that every “gesture of design” is the unavoidable consequence of our personal and human journey. Antipodes is the perfect example, since it has never been possible without the technical experience of my previous decades of work in the field of exhibition design, this is true, but what is much more interesting is that the choice of this concept would never have been possible without the stories I experienced personally and the ones I shared with all the people who took part in the design process. Our personal experiences, especially in the case of that project, were the real, conscious and crucial source of inspiration. Can you explain the layout of the project:
The booth is divided into two spaces where everything is opposed in an impacting face-to-face: a « Côté Passion » Side versus a « Côté Reason » Side. Two contrasting halves, two contrasting styles, two different perspectives on the world of ceramics and design that complement and coexist in an unexpected harmony. Côté Raison side is a space with clean design, stripped of all frills. The only presence in this sought-after simplicity is the face of a Japanese Noh theater mask, the emblem of the hieratic calm that reigns in this side of the stand. On the walls, videos broadcast refreshing images of leaves cradled by the wind that completes this reassuring tranquility. The Côté Passion side exudes extravagance and the sense of the exquisite with its decor that is flamboyant, pop and baroque at the same time. A real temple of the contemporary Horror Vacui with its mouth-shaped sofas that plunge into carnal passion, its virtual fireplaces and its great Galapagos turtle in homage to the novel « A rebours » by Joris Karl Huysmans, a cult book of decadentism. What problems or challenges did you face?:
Technical problems were easy to solve: at the end the structure was very simple but at the same time very open and very wide as it covered a surface of 250 squares metres without internal pillars, so we had to hang our ceiling to the ceiling of the Fair building. The real challenge was to find a visual language to respect the delicate balance between the declaration of the concept, that from a certain point of view could also involve political opinions and sensitivities, and the choice to leave it clear but discreet, without forcing visitors to embrace the one or the other of the two visit approaches I described before: simply aesthetic or deeply meaningful.

What do you feel were the most unusual design elements of the project?:
While I was designing the details of Antipodes and choosing the objects to complete its atmosphere, I decided to put in both the halves of the booth an unexpected object that could turn into the highlight of that side. In the “Côté Raison” I used the image of a typical Noh theater mask to design a 3-meter automaton that slides his eyes calmly. A smooth movement that is not easy to perceive during a superficial visit to the stand, but that is impossible not to notice for visitors staying at the negotiating table just in front of it, who were always very amused and surprised when they discovered this detail. In the “Côté Passion” side of the booth the star was a real-sized model of a Galapagos tortoise with its realistic skin and eyes: very appealing for all the visitors walking outside the booth, as it was visible outside the window, and definitely magnetic for selfie lovers who have made our turtle one of the more clicked icons of this editions of the Cersaie. How do you think this project is pushing design forward? What makes it special?:
I think design has the responsibility of spreading messages, not just creating nice things. Antipodes is undoubtedly a big box full of meaning. My biggest satisfaction wat to see with my own eyes and to hear with my own ears how many visitors spontaneously choose to go deeper than the amazing appearance of a bisected stand, and to follow the approach of understand its meaning and sharing their reflections. Every evening I was moved to count the number of messages we received from unknown visitors, colleagues, friends and even competitors who congratulated Novoceram for having had the peaceful will to touch such a delicate subject as the recent mood of tension and contrast that we all feel in today’s society and to find in this negative feeling the opportunity to propose a positive alternative. Suppliers:
All the floor and walls was covered with Novoceram ceramic tiles: Dax a graphic design at the format 120×120 cm. Maxima, which offers a wide range of sizes from 30×30 cm to 60×60 cm in smooth and structured version. Hirati the most natural of the ceramic woods. Cubes, an outdoor collection inspired by the Porphyry cubes that adorn Saint Peter’s Square in Rome.