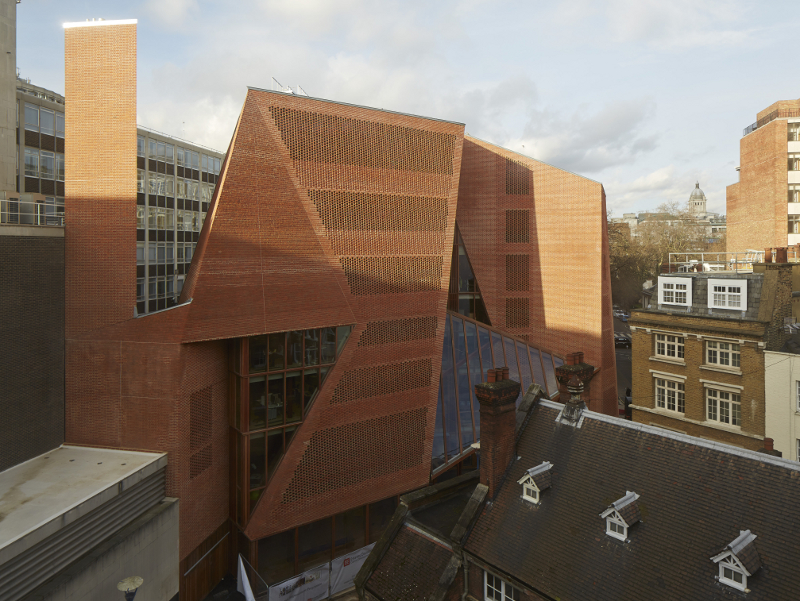 Sheila O'Donnell and John Tuomey - the Irish architects behind the Saw Swee Hock Student Centre at the LSE (London School of Economics) - have won this year's RIBA Royal Gold Medal, one of the world's oldest and most prestigious awards in architecture.

The lifetime achievement award, which is given each year for an architect or practice by the Royal Institute of British Architects is approved personally by the Queen and is given to a person or group of people who have had a significant influence 'either directly or indirectly on the advancement of architecture'. Operating as O'Donnell + Tuomey, the husband and wife team set up in practice together in 1988, having previously worked together for internationally renowned architects Stirling Wilford Associates and Colquhoun & Miller in London. According to the RIBA 'Their new practice coupled Sheila's quiet, studied 'rationalism' [with] John's fluent, rhetorical 'constructivism' and through their buildings, publications, exhibitions and teaching they have forged a confident new identity for Irish architecture.'

In the early 1990s, O'Donnell and Tuomey were part of the 'Group 91 Architects' group whose collective skill in masterplanning spearheaded the regeneration of Dublin's neglected Temple Bar. It was the pair's first permanent building, the Irish Film Institute (1991) that brought them profile and acclaim for its dynamic contribution to the revitalised Dublin quarter. Their early work, from a private home in Navan to schools, public housing and community buildings, provided the canvas for them to experiment and evolve their unconventional creative approach and celebrated style. More recent projects include the modest but brilliant Photographers' Gallery in Soho and the exceptional 2014 RIBA Stirling Prize-shortlisted Saw Swee Hock Student Centre at the London School of Economics.

Which building should win this year's Stirling Prize?

Speaking today, Sheila O'Donnell and John Tuomey said: 'We're delighted to have been chosen for this unexpected honour. We're humbled to find ourselves in such a company of heroes, architects whose work we have studied and from whose example we continue to learn. We believe in the social value and the poetic purpose of architecture and the gold medal encourages us to prevail in this most privileged and complicated career.' RIBA President Stephen Hodder said: 'O'Donnell + Tuomey's work is always inventive- striking yet so well considered, particular to its place and brief, beautifully crafted - and ever developing. It is an absolute joy and inspiration to hear them describe their work, and always a delight to experience one of their buildings. Sheila and John are at the vanguard of contemporary Irish architecture and I am delighted they are to receive this lifetime honour.'

O'Donnell + Tuomey have been shortlisted for the RIBA Stirling Prize a record five times, in 1999 for Ranelagh Multi-Denominational School (Dublin, Ireland), 2005 for the Lewis Glucksman Gallery (Cork, Ireland), 2011 for An Gaeláras Irish Language Arts and Cultural Centre (Derry, Northern Ireland) and 2012 for Lyric Theatre (Belfast, Northern Ireland) and in 2014 for the London School of Economics Saw Swee Hock Students' Centre (London, UK).

They have exhibited three times at the Venice Architecture Biennale and are both alumni of the School of Architecture at University College Dublin where they continue to teach and inspire the next generation of architects.

Sheila O'Donnell and John Tuomey will be presented with the 2015 Royal Gold Medal at a special event at the RIBA at 66 Portland Place, London W1 on 3 February 2015.