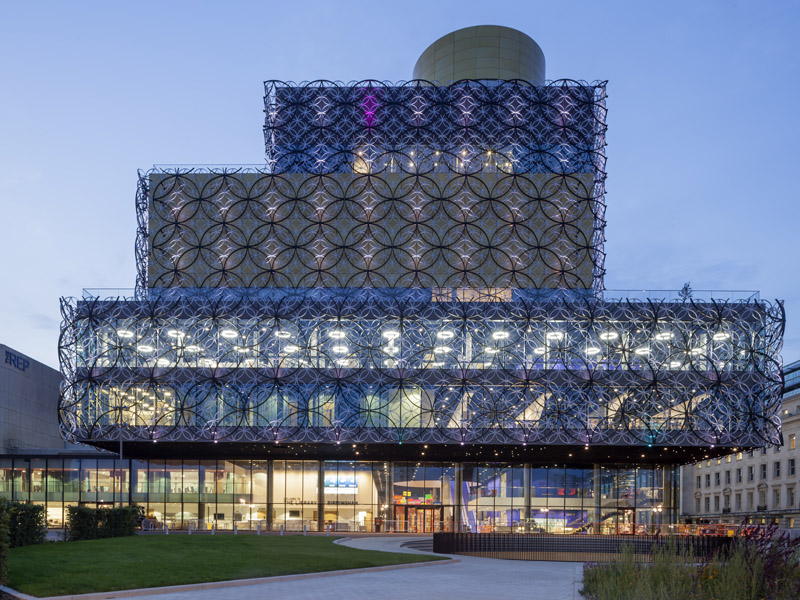 Liverpool's Everyman Theatre, London's tallest building, the Shard, and the new library of Birmingham are among the six buildings on the shortlist to win the 2014 RIBA Stirling Prize, which awards the 'best new building' in the UK. The six shortlisted buildings will now go head-to-head for one of architecture's highest accolades, to be awarded by the Royal Institute of British Architects (RIBA) on 16 October 2014. They will be judged on their 'design excellence' and 'their significance in the evolution of architecture and the built environment'. London Bridge Tower - the skyscraper better known as The Shard - by Renzo Piano Building Workshop is the bookies' favourite to win this year's prize with William Hill giving odds of 6/4, while the rank outsider is Manchester School of Art, with odds of 9/1.

However, reactions on Twitter have been mixed, with many architecture enthusiasts favouring the more subtle and less well known buildings. Here is the shortlist in full, along with information provided by the RIBA:

After nine years gestation, Liverpool has a brand new purpose-built theatre of outstanding quality. The selection and use of materials has created an exceptionally tactile building. This is a building that will age gracefully, continually enriched by the patina of daily use. It will both reassure and delight its loyal audience and those discovering this gem for the first time.

Library of Birmingham by Mecanoo Three stacked boxes adorned with a glittering filigree screen are the signature of this landmark, which makes a bold and transformative addition to the city. With formal and informal spaces for reading, relaxing, playing and participating in the library's programme of events, it has shaken the traditional perception of a library, turning it to a place where families and readers can spend a whole day learning and engaging. This world-class building was a fitting backdrop for the 2012 Olympic Games. Inspired by the fluid geometry of water in motion, the undulating roof sweeps up from the ground like a wave to fold over the building and define two separate pools.

It is very beautiful; sensual with a generosity of space. The pure and powerful form is conceptually flawless; it will be a favourite venue for Londoners for generations to come.

1.2 million square feet of accommodation has been built on a small parcel of land directly next to one of London's major transport hubs. To make a tower on such a tight site a thing of great beauty is a rare achievement. Six uses occupy multiple floors: health clinic, offices, restaurants, hotel, residential apartments and public viewing gallery; to create a 'vertical village'. The building is omnipresent in London and has added immeasurably to the city. This is an object lesson in creating a surprising and startlingly original building on a difficult urban site. Every angled facet responds to the rights of light of its neighbours. Formed as a continuous spiral rising upwards, the outer brick walls slope and twist, gouged with cuts and cracks that give light and form. The floors take up complex shapes, yet all the spaces feel natural and functional. This is a building showing a high degree of craftsmanship.

The major refurbishment of a 1960s tower and the creation of a new building with open studios and workshops has been executed with great skill and innovation. Design excellence has been coupled with a visionary brief calling for staff and students to break traditional course divisions and work across disciplines. This is a building where the exploration of design and creativity will flourish.