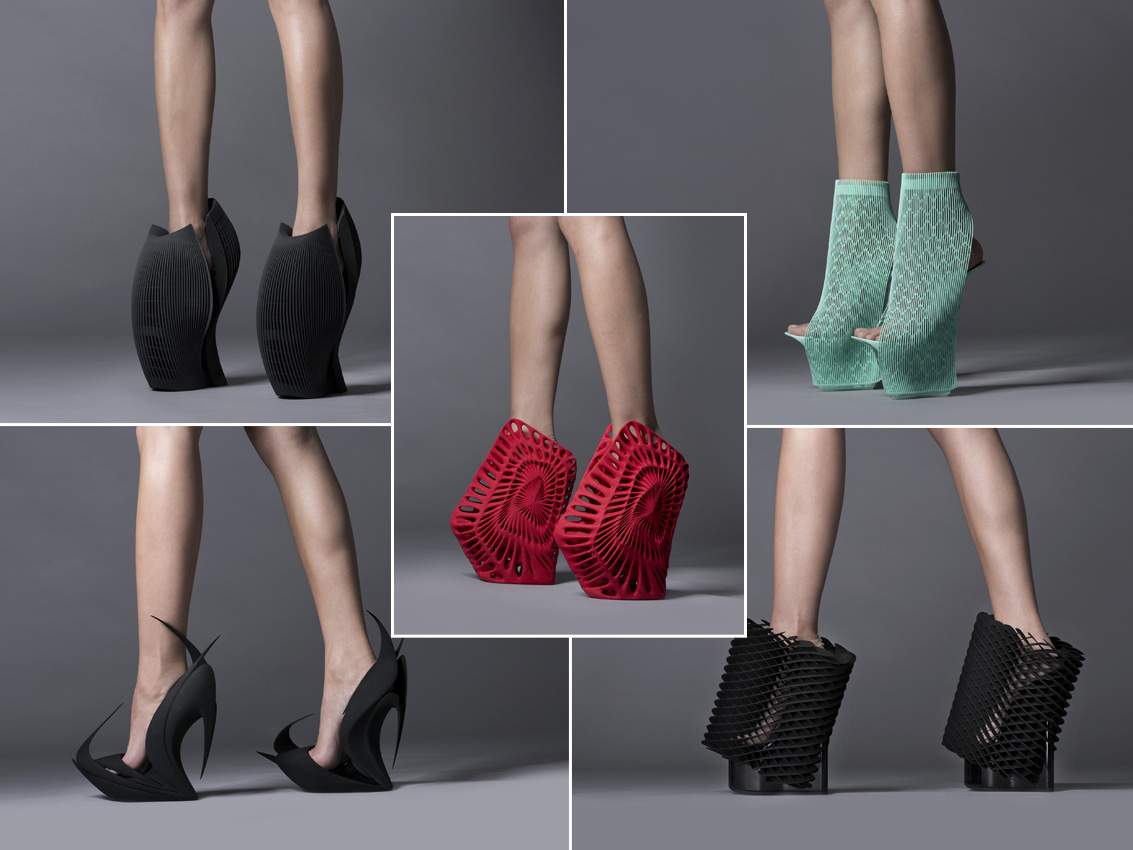 The cutting-edge collaboration between United Nude, 3D systems and five of the world's leading architects and designers

Perhaps any fashion girl's dream is finding a unique and sexy pair of high heels to elevate their look. However, these shoes reach a whole new level having been sculpted using a 3D printer by some of the most pivotal designers and architects of the decade.

Zaha Hadid, Ross Lovegrove, Ben van Berkel, Michael Young and Fernando Romero have pushed the boundaries of fashion and technology in a cutting-edge collaboration with United Nude and 3D Systems.

The Re-Inventing Shoes project is in town for London Design Festival and London Fashion Week, merging the worlds of fashion and design.

3D printing extraordinaire, 3D Systems, provided the highest quality of the technique with selective laser sintering in a hard nylon and new soft rubber material. Leading footwear brand, United Nude, has developed a method of fusing both harder and softer 3D-printed parts to produce fully functioning shoes. The shoes will run as a limited edition of only 50 pairs each.

Each designer discusses their shoe and the way in which it was created.

Founder and principal architect of UNStudio, Amsterdam and Shanghai The design of UNX2 was created to highlight the mechanics of the foot and visual effects when in motion.

To achieve this, vertical ribbons suggest movement even while static, and slivers of the wearer's foot can be seen from certain angle to amplify the curve of the foot.

The silhouette design combined with the vertical ribbons form an almost animalistic extension - like a hoof - that elongates the wearer's legs. Today Zaha Hadid was awarded Riba's royal gold medal for architecture to make her the first woman in her own right to be awarded the honour.

Hadid's shoes are synonymous with their name: depicting the flickering flames of fire in a dynamic and elegant way.

Flame-like spears curve back from the shoe's toe, with additional shapes at the heel sharply-angled in both directions.

The result is a multi-dimensional shoe with a fluid yet striking design. A well-known and respected designer, Ross Lovegrove has a ream of collaborations to his name, and was invited to join the Atelier de Nimes along with Jean Nouvel and Phillipe Stark, consulting to amongst others Cacharel, Louis Vuitton, Hermes and Dupont.

The freedom allowed by the unrestrained free-form sculpting of advanced 3D printing is totally invigorating and emotionally stimulating, said Lovegrove of the collaboration.

Lovegrove's design concept is based on the 'core female anatomical beauty' but maintains an underlying technological notion.

The layered matrix of the mesh material covers most of the foot, leaving the heel and toe free. The almost-complete coverage of the foot is softened by the pastel green-blue hue.

'The complex tri-dimensional polygon mesh provides what is termed a Watertight Geometry whereby nothing is extraneous either in material volume or functional characteristic', said Lovegrove. Internationally-recognised architect Fernando Romero drew inspiration from the geometry of nature, the human body, and the cosmos.

Seeking to find a rational answer amongst an enigmatic sphere of mathematics, Romero has used numeric sequences for his shoe design.

Dating back to ancient Greece, organic geometries have been examined by some of the most respected methodical minds, and the connection between the human body and these numeric sequences can be seen throughout works of architecture, art, and design, said Romero.

This red-hot, striking pair sees the juxtaposition of ultra-modern technology with organic patterns, man-made blueprints and a timeless form. One of the most sought-after designers in the UK and one of Asia's leading design studios, Michael Young has created an unforgettable pair with the Young Shoe.

Having worked with 3D technologies in the past, Michael Young Studio jumped straight into the project. The team were riveted by the sculptural freedom given that they are normally kept to certain parameters and you can see the result is staggering.

A complex lattice builds upwards to create a boot-like shape. The tangible structure allows for durability and flexibility in the heeled shoe.