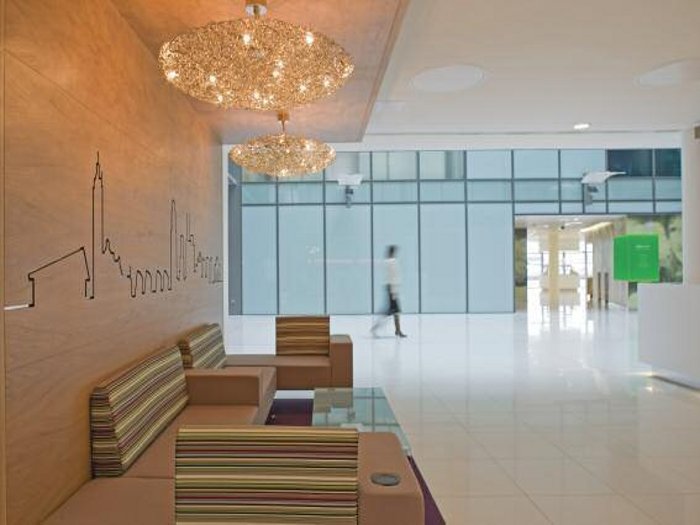 When the Newham Council decided to relocate its 26 separate offices into one new and contemporary headquarters, the ID:SR design team had challenges of space and a tight public-sector budget to contend with

Designers working in the pubic sector often feel like they’re being asked to perform miracles, and that was certainly the case when ID:SR, Sheppard Robson’s interior design division, took on an office project for Newham Borough Council at London’s Albert Dock. The brief, as head of interior design Helen Berresford explains, was extremely demanding.

‘Newham’s interiors were both a challenge and an exciting opportunity,’ says Berresford: ‘A challenge to fit 2,500 people into an office with 1,800 desk spaces, and an opportunity to do something aspirational that reflects the great diversity of the borough at a time when it is gearing up for the 2012 Olympics.’

As is the case with most public sector projects, the budget was tight. ‘We had to be careful not to be too lavish, but we wanted to create a place Newham Council’s staff could be proud of,’ says Berresford. The new eight-storey office at the Albert Dock houses 2,500 staff relocated from 26 separate offices, including temporary cabins and old town halls. The idea was to create an office where employees would feel at home, so much of the design was based on the theme of ‘neighbourhoods’.

This theme led designers to experiment with line drawings of urban skylines whose shapes then inspired a specially made structure, which the design team refers to as the ‘ribbon’.Made of a sort of rippling ribbon of wood, this long structure encompasses several meeting rooms and desks and provides impromptu seating.

‘It’s made of oak with a white-tinted lacquer,’ says Berresford. ‘The timber finish finally used was a product from Khars, selected on the basis of its sustainability and its ability to be a cladding and a flooring material since it had to be able to do both.’

The ‘ribbon’ also creates a natural screen between the breakout space, nicknamed ‘parklife’, and main work areas, which have desks by Task Systems. Staff had requested curving desk clusters, but this would only accommodate 198 people on each floor compared with as many as 240 if straight lines of desks were used.

ID:SR brought the staff around with the neighbourhood concept, arranging teams at either end of the floorplate, divided by shared areas called Town Squares.

Graphics have been used throughout the office. The urban skyline motif, for example, appears as a decorative pattern on signage and as a wall graphic in the reception and in the business lounge. Graphic representations of circuit boards and close-up images of leaves have also been applied to glazed partitions.

Several screens have been used to divide the larger spaces and create ‘functional zones’. In the restaurant, for example, angled wooden slats in various shades of pink and purple separates an audiovisual area from the restaurant.

The restaurant has bespoke canteenstyle tables and benches and bespoke lighting sourced by lighting design consultancy Chapman Bathurst, while the reception and business lounge have Crystal Waters chandeliers by Brand Van Egmond.

Aside from timber flooring, which matches the ‘ribbon’, floors are finished by Miliken, Interface and Westbond, which Berresford says were chosen ‘to get the right materials with the right performance, in the right colours and at the right price.

‘In terms of cost savings and efficiency, Newham’s new offices have become a benchmark for public sector workspace. People do not only work individually, they also undertake collaborative tasks. Sharing desk space frees up 25 per cent of the office floorplate for the various neighbourhood zones.

‘The sense of ownership generated by the neighbourhood concept mirrors the provision of services for the Newham community, symbolised in Newham London’s motto: A place to live, work and stay.We are proud to have created an environment which is not just good for public sector, but good by any standard’.

This article was first published in fx Magazine.