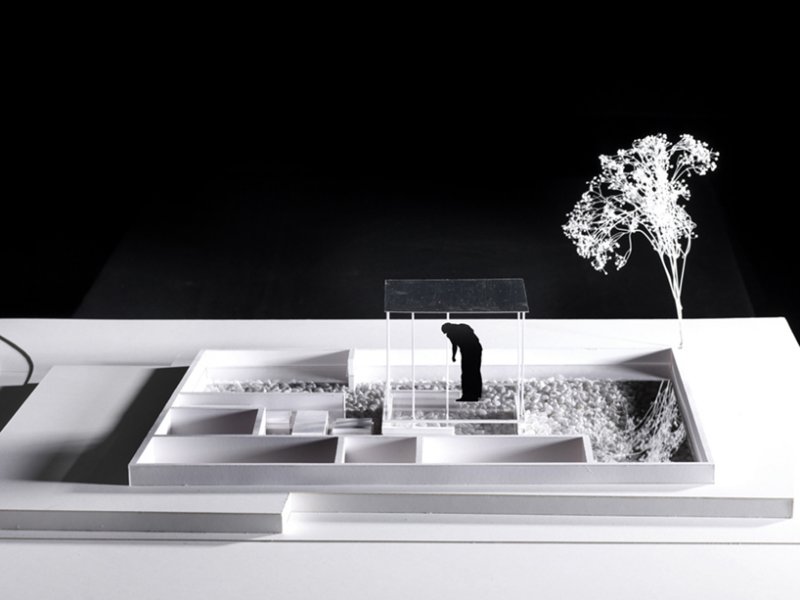 How were you commissioned?:
This project is a thesis project at MIT for master degree, and the architecture is for 2011 3.11 Japan tsunami victims.

What was the brief from the client and how much were they involved?:
A target for this thesis project is every individual, including victims. [ME]morial will serve as a space not only for soothing victims' wounded hearts but also for letting people experience individual memory and memorial space for individuals.

How did the brief affect the materials and design choices?:
Floated steel and glass plates are projected into the air based on the existing foundation of the housing of the past on the site. It gives an opportunity for the individual to experience memory of the past.

How did your previous experience help you with this project?:
I visited the site in which damaged by the tsunami in 2011 for my one of the option studios at MIT and my personal art installation exhibit. The sadness of the site inspired me for the local to console in not a traditional way but a new way for the individual in Sendai.

What problems or challenges did you face?:
Since the foundations of the housing washed by tsunami located over several kilometers, as an architectural designer, it was impossible to deal with every spot for the [ME]morial. Thus, this project does not have a boundary. It is open-ended. This thesis project is proposing three [ME]morials, but it will blaze a trail for future plans. The spatiality of each [ME]morial will be different according to both existing conditions of the different remnants and different spatial representations.

How do you think this project is pushing design forward? What makes it special?:
This [ME]morial project in Sendai will also create communal memory by spreading out memorial spaces for memorializing individual memories so that, in the future, it will allow every individual to feel both individual and communal mnemonic sensations at the same time. This new attempt will become a powerful architectural experiential device, allowing not only extension of the architectural definition of memorial architecture, but also investment to create a new type of relationship in the Sendai area's restoration process.