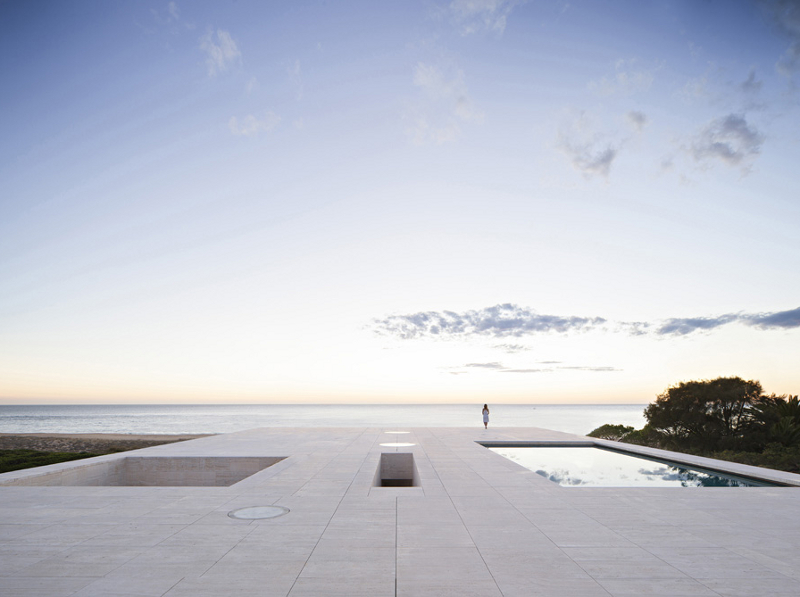 Architect Alberto Campo Baeza has created a minimalist marvel on the coast of Cadiz, Spain

Standing on a beach, looking out across the seemingly infinite ocean - it's one of those special moments when the usual stresses and strains of life pale in comparison to the awesome natural beauty of our planet.

It was this feeling - and an incredible location on the coastal region of Cadiz in Spain - that inspired the design of this amazing minimalist house by Estudio Arquitectura Campo Baeza, which is appropriately named House of the Infinite.

Architect Alberto Campo Baeza says the project is 'the most radical house we have ever made, an infinite plane facing the infinite sea'.

He continues: 'We built a powerful podium in Roman travertine whose upper horizontal plane becomes the protagonist of the space. Inside the podium, underneath this platform like a temenos, is the house.

As well as functioning as a viewing platform and patio, the platform, which is made of Roman travertine, also has its own swimming pool.

The platform forms the roof and ceiling of the main living room, which Campo Baeza describes as 'a large box with 20 meters of frontage and 36 meters deep. And under those first 12 meters we excavated two floors in the solid rock to develop the whole living space.'

To give even greater force to the platform the archtiects incorporated all the terrain as far back as the entrance wall separating the house from the street. The entrance to the house is by a 'trench' in the form of stairs dug into the upper surface of the platform.
The house is breathtakingly beautiful, but the design is also practical: Above and behind the stony platform, we have erected stone walls to protect us from the strong prevailing winds.

Inside, the house is daringly minimalist in style - but when the views from the windows are so stunning, who needs interior decoration?

Says Campo Baeza: 'We wanted this house to be capable not only of making time stand still, but to remain in the minds and hearts of humankind: the house of the infinite.'