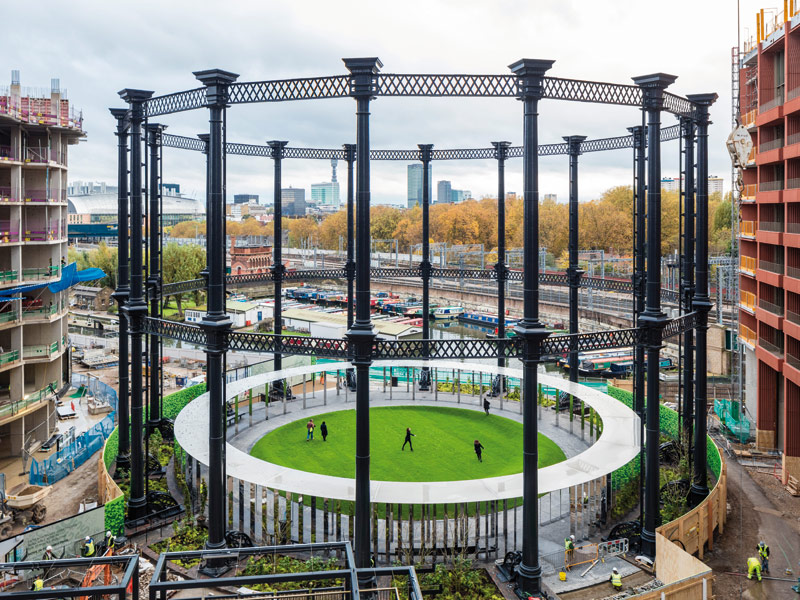 Once part of the largest gasworks in the world, one surviving gasholder in King’s Cross has been brought back to life in the regenerating area as the lawn-filled Gasholder Park, by Bell Phillips Architects. Cate St Hill reports

While the skeleton structure of Wilkinson Eyre's gasholder project is quickly rising, waiting for the original gasholder guide frame to be magically dropped back into place, one gasholder has already been brought back to life in King's Cross, London. Amid the landscape of cranes and the noisy hum of diggers that are rapidly transforming the area, Gasholder Park is a tranquil, new, green space set within the restored bones of gasholder no. 8.

Designed by Bell Phillips Architects, the park is encircled by a shiny, stainless-steel canopy that forms a continuous colonnade around the inner perimeter of the 25m-tall, cast-iron frame. In the centre of this mirrored oculus is a lawn that gently slopes down to overlook the adjacent canal. Like SANAA's Serpentine Pavilion or Jeppe Hein's Mirror Labyrinth in Chiswick Park, the new mirrored structure creates a visual illusion, invisible from afar but giving a sense of enclosure once inside.

'The gasholder was always the main thing, and our role as architects was to enhance that space and give it a human scale,' says Hari Phillips, director of Bell Phillips. 'Before the colonnade was in place it felt too open and exposed. What this does is it frames the central space and makes it into a focal point - a piece of theatre you look into.'

Constructed by the Imperial Gas Light and Coke Company in 1853, gasholder no. 8 at one time formed part of the largest gasworks in the world. Grade II-listed in 1986 and decommissioned in 2000, the 40m-diameter circular structure was dismantled from its original location (now Pancras Square) to make way for the extension to St Pancras Station and the Channel Tunnel rail link in 2011. The guide frame was refurbished by a specialist restorer in Yorkshire and reassembled in 2013, finding a new home next to David Morley Architect's Plimsoll Building and Wilkinson Eyre's trio of gasholders along the Regent's Canal.

Bell Phillips won an open design competition for the park in 2009. It's the practice's first public realm project. Says Phillips: 'Initially we looked at James Turrell's work and at framing the sky and the gasholder. In a way, what happened was the aperture of that lens became bigger and in the end what we were left with was a colonnaded space.' The 30m-diameter structure, made of 50mm-thick stainless steel polished to a mirror finish, stands on delicate, thin columns that disperse towards the south for views across to the canal. Each one is angled, enclosing the gasholder on the north and bouncing reflections of the green space in the middle.

Perforations on the roof of the structure also increase in density from north to south, allowing the canopy to be appreciated from the lower level of the canal towpath, or lit up at night from WE's apartments above. Water-jet-cut diamond shapes were derived from the angle of the columns and also relate to the structural stresses within the steel. Says Phillips: 'We wanted it to have a delicacy but also have a contrast to the gasholder itself, which is industrial, big and heavy. We wanted this to be of the 21st century; delicate, precise and seamless.'

Once the surrounding buildings are completed, Gasholder Park will become a confluence of routes in the new King's Cross. On a clear day, you'll get a view right down to central London and another iconic landmark, the BT Tower, directly in front.