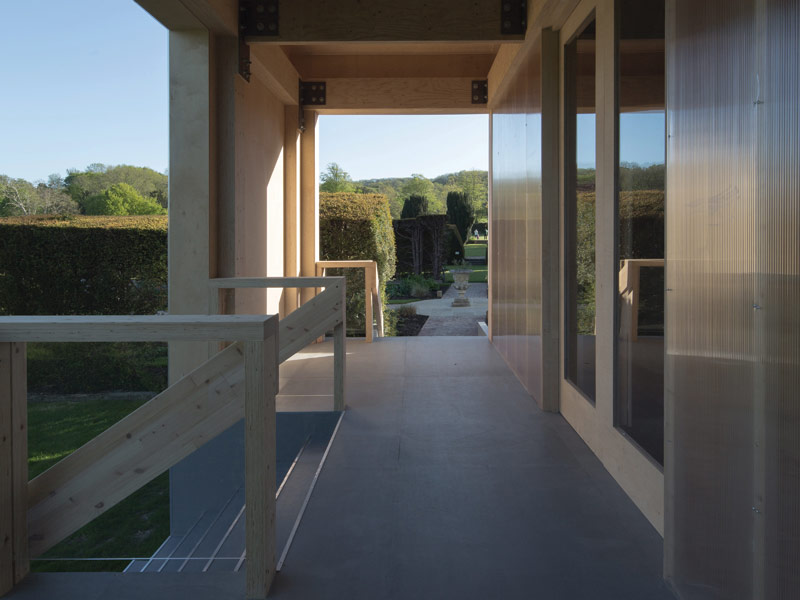 A long-time showcase for opera productions, Glyndebourne is now in a three-year collaboration with the White Cube gallery to add a season-long showing of art, launching with work by Georg Baselitz, in an on-site pop-up gallery designed by Carmody Groarke. Cate St Hill reports

Dozens of pairs of legs and feet, all in coquettish stilettos, spin as if dancing the can-can. They're the latest series of paintings by provocative German artist Georg Baselitz for White Cube, installed in a new temporary pavilion designed by Carmody Groarke in the leafy grounds of Glyndebourne.

There's something distinctly theatrical, if a little risqué, about them placed in this most bucolic of settings, with the gently rolling hills and bleating sheep in the near distance.

At first it might seem like an odd pairing, a contemporary art gallery and great opera house on the site of a historic English country manor - indeed, the smart, black-tied guests might get a little bit of a shock when they realise the paintings explicitly reference swastikas - but Glyndebourne is trying to attract an edgier crowd.

Although it has never had a formal gallery space before, Glyndebourne has a long history of the visual arts. David Hockney designed the set for a production of The Rake's Progress in 1975, Henry Moore's Draped Reclining Woman was lent from the Tate for the gardens for 25 years in 1995, and Julian Opie, Fiona Rae, Grayson Perry and Anish Kapoor have all produced artwork for the programme book.

There's also an artists-in-residence programme, started in 2010, which invites selected local artists to create pieces including sculptures and sketches inspired by activity on the estate.

The collaboration with White Cube will run over three years, Carmody Groarke's pop-up gallery space being dismantled and built again each festival season, with Baselitz being the inaugural exhibition. Baselitz, now 77, made the series of 14 paintings, halfway between abstraction and figuration, especially for Glyndebourne (not all can be shown in the gallery). Each piece, enclosed in a golden frame, is named after music, referencing Bach, Mozart and Wagner as well as hurdy-gurdy and folk music.

'We didn't want it to be a simple illustration of Glyndebourne's programme, that would have just been a one-liner. We wanted to make it a bit more challenging for the visitor,' says exhibition curator Andrea Schlieker. 'This is a very lighthearted, frivolous series - it's very playful; you can see windmills, turntables, the hands of clocks. The whole notion of velocity and movement is very important. Baselitz paints his canvases very fast on the floor, using brushes and sticks, and sometimes his fingers.'

Carmody Groarke's pavilion is similar in construction to its pavilions for the 2011 Frieze Art Fair. Photo Credit: Luke Hayes

The pavilion, positioned on a former picnic area, sits to the south-east of Michael Hopkins' 1,200-seat auditorium (built in 1994), looking on to the estate's gardens and lake. Its design is relatively simple - a wooden shed-like box with a sloping roof. Made of plywood and clad in translucent plastic, it is similar in construction to Carmody Groarke's temporary pavilions for Frieze Art Fair in 2011.

Inside, the tight 10m x 8m gallery space is bordered on three sides by balconies that provide a buffer between the building and the landscape surrounding it. 'We had lots of debates about whether the pavilion should be literally a white cube. In the end we came up with the idea that it should be a building within a building, so there was not an abrupt inside/outside boundary,' says Andy Groarke of Carmody Groarke.

'We wanted to attract chance encounters into the gallery and the pavilion to still be part of the promenade around the gardens.'

Inside the pavilion you could almost be in any white-walled gallery, but in those not-quite-inside/ not-quite-outside spaces, visitors are afforded a wonderful, elevated view over the lake. And that's why you go to Glyndebourne, for the setting.